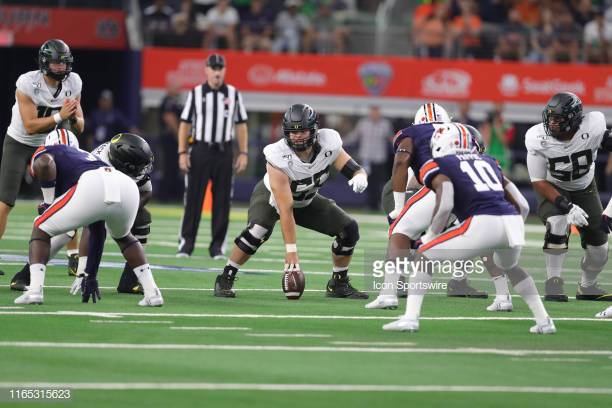 Nearly all of Oregon’s offensive line is in the draft this year. Jake Hanson was the man in middle and a four year starter along with fellow lineman Shane Lemieux. Oregon used a combination of Power and Zone running schemes.

In the passing game, post snap he sets up quickly with a solid base and good pad level. He has solid quickness with his hands to engage the defender and once locked on shows good hand strength and placement to sustain his blocks. He shows a good anchor and core strength to handle power rushes and has solid footwork to mirror rushers. He has good awareness to recognize twists and smoothly passes off rushers. When uncovered he will look for work and willing to help his teammates.

Vs Utah, this is twist where he engages the DT and show good recognition to pass him off as the Edge comes around.  It was perfect but it was effective.

Vs Wisconsin, here is a rep showing good hand placement and core strength. He has his hands inside to control the defender as he tries twice to yank down Hanson but he handles it well.

Early in the season, after the snap and was just punching with his left hand leaving him susceptible to pass rush moves on that side. He needs to be patient with his punch to avoid lunging putting him off balance as well as have more power behind it. He was ineffective on screens lacking the quickness to get out in front.

Vs Auburn, he punches with only his left hand and the defender swats it away and easily slips through the A gap.

As a run blocker, in Power run schemes he has solid hand placement, good leverage and solid leg drive to handle base blocks, down blocks and works hip to hip with teammates on double team blocks. He has solid mobility to execute short pulls and pulls to the outside as a lead blocker. He is strong on second level blocks inside when the defender is attacking and he doesn’t have travel to far locking on to near defenders and controlling the block. On Zone blocks he shows good strength and timing to release on combo blocks and shows good play strength and leg drive to displace defensive lineman and open up cut back lanes.

Vs Auburn, here is a combo block where blocks down to the DT and releases to engage the LB closing in and uses hand placement and strength to open up the hole.

Vs Colorado, it’s a Zone play to the left and he’s able to get outside of the 0 tech and showed good leg drive to push him downfield and wall him off.

When his hand placement gets outside he loses control of defenders and that is when you’ll see him slip off of blocks. When he has to get to the second level, when the defender hangs back, his breakdown is late allowing quicker defenders to get around him. He has marginal lateral quickness to perform reach blocks on outside Zone runs against defenders that aren’t directly over him.

Vs Utah, he lunges toward the DT with his head down and misses on the tackle.

Hanson is experienced, knowledgeable player when has good core strength, solid leg drive and can handle most interior blocks solidly in the run game and has a good anchor and solid ability to mirror in the passing game. His use of hands is a key to his success. Inside is good, outside is bad. He works best in tight spaces and lacks the lateral quickness and speed to handle outside Zone blocks or screens so he would best fit in a Power blocking scheme and could benefit adding 10-15 pounds.