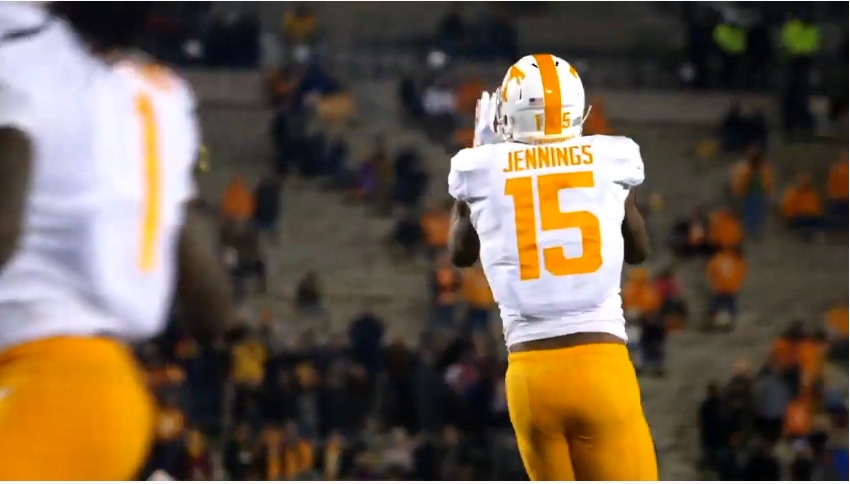 When it comes to slot receivers, it will be harder to find a bigger target than Tennessee’s Jauan Jennings. Standing at 6’3 and 208 lbs, Jennings was utilized to perfection in the slot last season as he was able to bully his way over the middle of the field. He led all receivers in broken tackles last season according to PFF as his 6’3 frame was too much for smaller slot corners and defensive backs to handle.

That play above pretty much wraps up what Jennings will bring to the NFL. Defenses are at a big disadvantage if they give him space over the middle, as he is a one man wrecking crew with the ball in his hands. Senior Bowl director Jim Nagy called Jennings a “junkyard dog” and you can see why above. He finds the soft spot in the zone and breaks numerous tackles for a touchdown. The Tennessee receiver is going to attract a lot of attention this spring simply for his yards after the catch potential as he rarely, if ever, goes down on first contact.

Playing in the slot, Jennings was often afforded an uncontested release and a lot of room to operate. This bit defenses in the backside tremendously as not only is he a threat to break tackles by trucking over defenses but he is hard to square up on once he gains a full head of steam. Trying to tackle Jennings when he has momentum behind him is like trying to tackle a moving car as he makes easy work of arm tackles.

The slot is not the only area where the Tennessee receiver is projected to make some noise as he also excels in the red zone. At 6’3, Jennings is going to win more than his fair share of jump balls. He consistently attacks the football at its highest point and is able to outmuscle cornerbacks for possession. He does it while lined up outside on the play above but he can also do it from the slot, which is visible on the play below.

Catch radius and strong hands are very important at the next level and Jennings shows both on the play above. The pass is slightly behind him but he is able to pluck it away from the defense and bring it down for the touchdown.

One area that remains a mystery when it comes to the Tennessee receiver is how well he will do against tighter and more physical coverage at the next level. He shows a good ability to stem his routes, which he shows on the play above and he will need to show more of that at the next level. Projecting route running is tough at times for prospects as they often face soft zone coverage in college and Jennings is a perfect example of that. Barring the red zone, most of his receptions came with a ton of space in front of him. He has some impressive reps when it comes to getting separation and he is going to need to continue showing that as he progresses to the NFL.

While his hands were very impressive when I viewed him at this year’s Senior Bowl, Jennings’ tape is a bit more questionable when it comes to his hands. He did suffer from the occasional drop, which is witnessed above and did double catch more than a few balls. This is another aspect of his game that will need some polish at the next level.

Jennings’ character also cannot be ignored. While he was dismissed from the team at one point in 2017, he has rebounded since then and done a lot of good work, including being named team captain in 2019.

So, where does that leave Jennings’ final evaluation? His rare size and yards after the catch ability in the slot is going to garner him a ton of opportunities in the NFL. As the game moved towards shiftier and quicker slot options, Jennings is the perfect checkmate answer as he overpowers the smaller defenders located over the middle of the field. He can break tackles and create an absurd amount of yards after the catch as he is tough to tackle when given space to operate. While his route running is not the sharpest, it may not have to be as long as he can outmuscle defenders for the football at the point of attack.

Games Watched: vs BYU, vs Florida, vs South Carolina