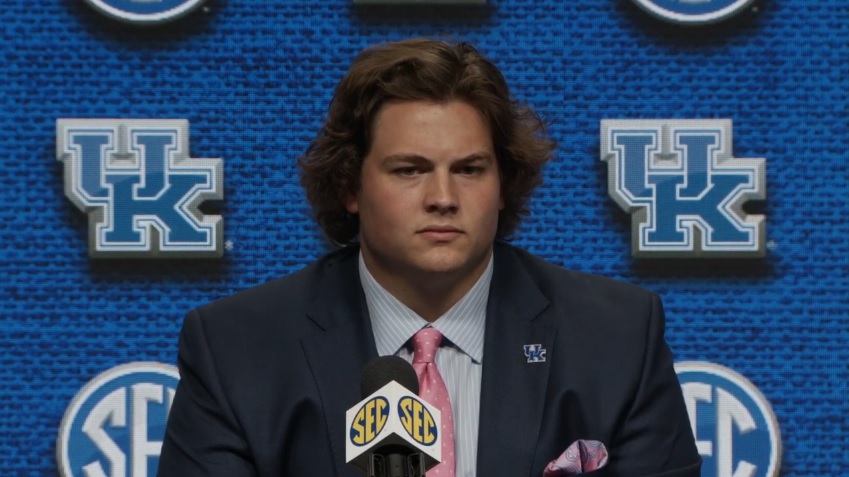 Coaches, teammates and even Logan Stenberg himself all use the same word when asked to describe him. Nasty. He is a three year starter at left guard in a power running scheme in which the primary running area was right behind him. Like a cowcatcher on the front of the train he clears a path on the track.

As a pass blocker, he shows good quickness at the snap and sets up at the LOS. He has good arm length and strong hand strength to lock on to power rushers and has a very good play strength and anchor. He has good awareness to recognize stunts and twist and passes them off smoothly.  When uncovered he looks for work and will try to put defenders on the ground. He relies upon his very good play strength to overpower defenders. He has solid agility to get out on screens and the strength to shove defenders out of the way.

Vs Florida, here is a screen to the right. Not the most mobile player but shows his strength on the second level.

Vs Florida, taking on the bull rush he uses hand placement, leverage, strength and anchor to absorb and shut down the rusher.

Most guards will set up off the LOS a little bit on passing plays but he doesn’t likely to shorten the distance between he and the rusher to limit the chance to use speed around him. Speed rushers give him issues as his lateral agility to slide left and right is marginal and if really stressed he will cross over his feet. He is grabby with defenders who shoot into gaps and will attempt to yank defenders down instead of sliding with the rusher.

At Georgia, the DL shoots into the B gap and had Stenberg crossing over his feet almost immediately. This rep works in his favor but you never want your OL crossing his feet.

As a run blocker, is where Stenberg really shines. He has good quickness at the snap and has good hand placement, a strong base and very good play strength to control and move players one on one. On down blocks and double teams defenders get displaced. He displays solid mobility to fold over the center and lead through the middle or pull to his right and good awareness to pick up the most dangerous defender. On the second level he plays under control, shows good timing to breakdown and uses his length to lock on and engulf smaller defenders.

Vs Penn State, he’ll block to his right on the 1 Tech and easily moves him out of the play.

Vs Florida, he uses good hand placement and strength to turn the defender inside and then puts him on the ground.

Vs Georgia, he’ll pull to his right and pick up the linebacker and drives him out of play.

I didn’t see him pull left but should be okay based on his ability to pull to his right. Doesn’t look like he has the quickness to reach block but will move defenders to open a cut back lane. Because of his size, h must be consistent with his pad level. When beat by quickness his reaction is to grab and throw the defender down and was called for holding multiple times doing this. When he misses a block it’s obvious because he will react by playing past the whistle or jumping on a defender late.

Vs Virginia Tech, the defender gets in the A gap. His hands are on the outside of the defender and he throws him down and gets called for holding.

If you like your offensive lineman be nasty, talk trash and enjoy serving up pancakes, this is your man. His goal is to put players on the ground. He plays with intensity and competitiveness and has proven year over year his ability to open up holes.  He has the strength and anchor to handle power rushers and the mental processing to handle stunts. He needs to be more consistent with his pad level, keeping his hands inside and his emotions in check. His lateral footword particularly against the pass needs to improve to handle speed in the gaps. He is tailor made for a power running scheme where he can uses his strength and demeanor to displace defenders to open up gaps.