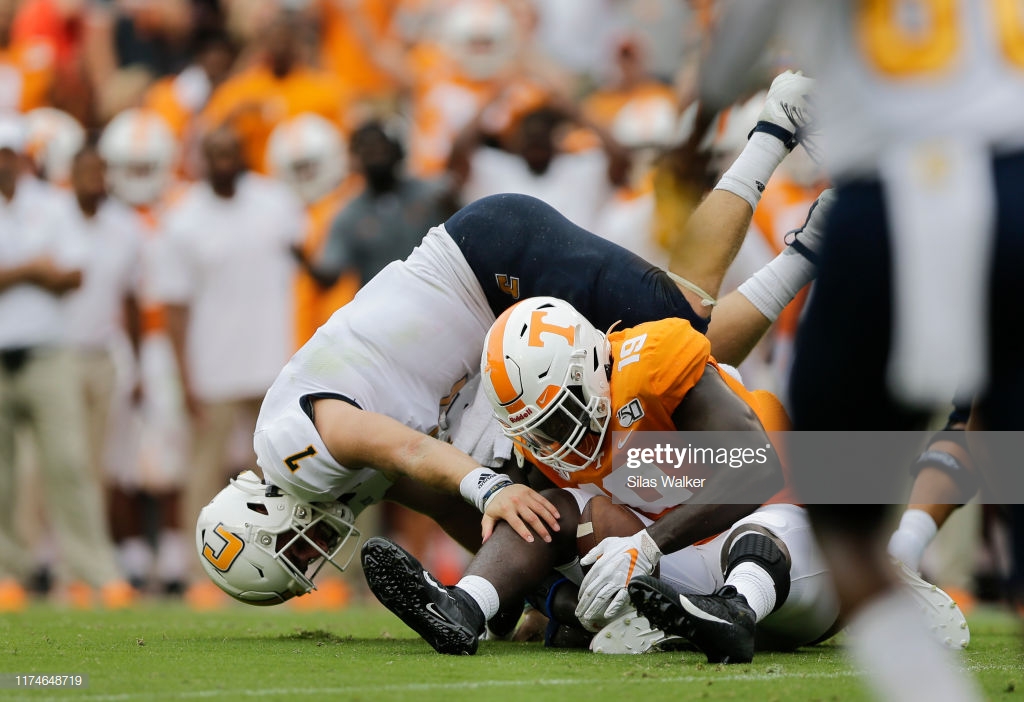 -Flashes good bend and short-area athleticism
-Functional dropper into space and can stick with TEs
-Shows some backside pursuit want-to when playing the run
-Strong, sound tackler with above-average grip strength
-Good dip and rip in toolbox, as well as a quick, efficient swim move
-Comfortable lining up all over the defense, as well as in a two- or three-point stance
-Has a good chop when he gets home to QB to force the football out

-Lacks necessary power in his punch and is inconsistent setting the edge against the run
-Really raw run defender that prefers stalemates to actually penetrating and making plays
-Get-off at the snap is a disaster; often last off the ball
-Limited pass rush plan and arsenal; lacks counter quickness and overall setup
-Can completely disappear for long stretches on film

For an EDGE defender that has racked up 16.5 sacks in the last two seasons in the SEC, Tennessee’s Darrell Taylor has some disappointing film.

Through three games, Taylor occasionally flashed some high-end skill, but for long stretches he flat-out disappeared.

I may sound harsh here on him, but that’s just how I feel having completed his film study. That said, he did show some things that had me intrigued.

He doesn’t have a deep, developed pass rush arsenal or plan, but he has a quick, efficient swim that works quite well against interior offensive linemen.

That’s a quick club and swim to keep himself clean and win with ease for the sack.

Later in the same game against BYU, Taylor showed the ability to bend and turn the corner.

When he gets a good jump off the ball, he can get vertical in a hurry, changing the drop path for tackles on the edge. This looks like an inside set from the BYU tackle, but due to Taylor’s speed and jump up the field, it throws the set off, forcing the BYU tackle to hold.

That’s some great ankle flexion too by Taylor, who doesn’t lose speed or power bending underneath the block, drawing the holding penalty.

Against the run, he’s mostly a mess and would rather lock out and hand fight with linemen, rather than get off blocks and make plays in the backfield on a regular basis. Here though, he does a nice job of staying on his feet and then shows the hand strength to wrestle the Georgia running back to the ground in space for the big TFL.

The one thing I really liked about Taylor’s game was his functionality in space. He spot drops well and has some awareness, moves really well in space for his size, and has shown the ability to stick in coverage against tight ends.

In the first clip above, he’s basically a spy in this instance. The spot drop leads to nothing, but he has the ability to click and close against athletes in space, like he does here against the BYU running back out of the backfield. You see the strength in his hands too to keep the back from reaching the first-down marker.

In the second clip, Taylor does a great job staying with the Florida tight end on the out and up. Now, the throw goes to a different receiver, but you see the athleticism and change of direction skills with Taylor to stick with the athletic tight end.

Final thoughts on Taylor – he has some really good production the last two years at Tennessee, but it seems like hidden production, based on the tape I saw. He’s a good athlete and flashes a bit of what is needed to win on the edge, but there’s just far too many stalemates against the run and a complete disappearance on film from him.