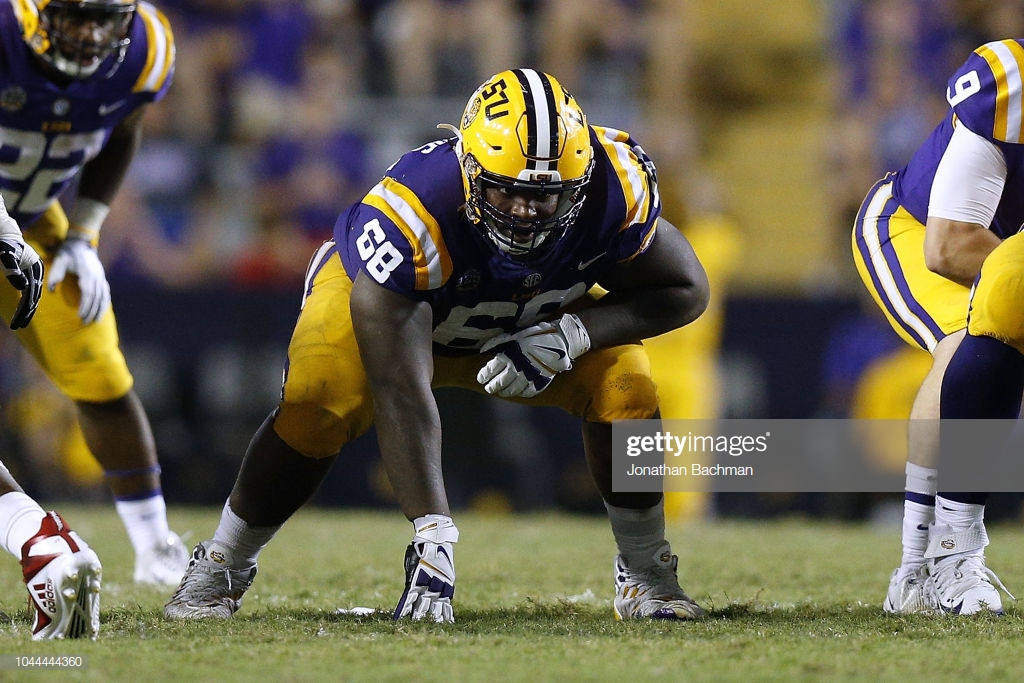 There are certain players whose natural gifts override their suspect fundamentals and that is certainly the case with LSU guard Damien Lewis. The two year starter for the Tigers is a prototype for the right guard position with a thick lower body, natural bend and good arm length. When you combined his obvious power with a desire to move men off the ball, he’s an exciting prospect with a lot of raw potential. We’ll start with the issues that Lewis has as a technician first.

The issue is that all of these traits are intermittent and spliced in with some of the most wild, poor footwork from a quality guard prospect. As a run blocker Lewis does not consistently keep his pad level low and sacrifices leverage and base when he lunges at defenders. He also does not bring his hands and feet in coordination at all times, which limits his ability to drive block.. His 33’ arms are more than long enough to execute just about any block, but he does not consistently move his feet and put himself in position in order to win. This effectively shortens his arms and makes him look like a sub-par candidate physically for the position.

Lewis is also likely a scheme specific player at the next level because he lacks the speed necessary to pull or zone block against quicker defensive tackles.

The issues with Lewis’ footwork and movement skills are much more pronounced as a pass blocker. His footwork in pass protection is downright awful at times. He’s shown the propensity to get his pad level too high, which allows defenders to blow him off the ball, which is something that should never happen to a player with his physical profile. Pad level affects balance and center of gravity.

When a blocker’s center of gravity is off, this happens:

There are far too many reps that Lewis is on the ground. It’s not just one issue either. He lunges, stops his feet, and sometimes just doesn’t have the foot speed to recover. There’s a lot of work to be done in this area in order to make him a starting caliber guard in the NFL.

Despite all of that, when Lewis puts it together, he’s exactly what you’re looking for in a powerful, people-moving right guard.

His strengths lie as a run blocker who has enough athleticism to work off a double team to the second level and secure the linebacker. When done correctly, this creates massive yards before contact for running backs.

Even as a pass protector Lewis flashes the ability to be a high-quality pocket protector with enough foot speed to recover when beaten or to handle delayed blitzes. He shows the ability to absorb contact without giving ground and can fight back to a stalemate with a bull rusher if he initially gives up his chest when hand fighting.

Lewis has shown enough improvement on film and has enough physical traits that some team is going to take a chance on him in the middle rounds of the NFL Draft. While he might be a bit of a project, he seems to have the temperament and desire to improve in all areas of his game. There is a bit of bust potential with Damien Lewis, but his high-end play is encouraging enough for the risk of an early Day 3 prospect.

Games Watched: CFB Championship, vs Alabama, vs Auburn, vs Southern Miss, vs Texas