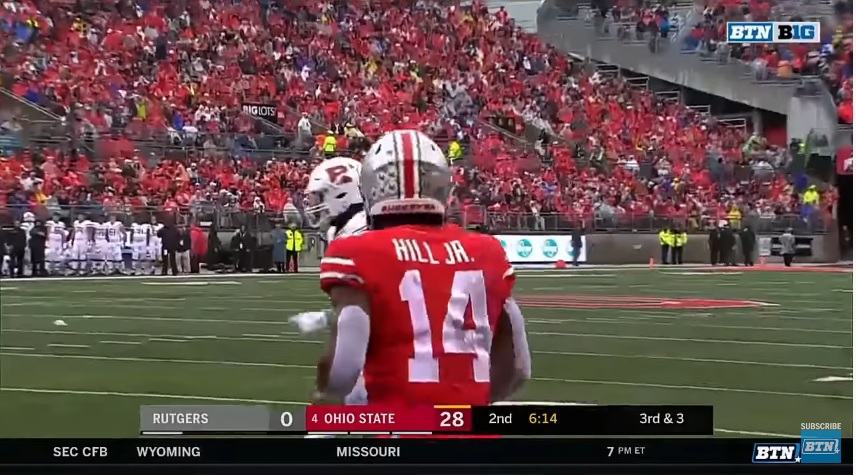 Ohio state receiver K.J. Hill has been getting it done for a long time. Year after year, his school has been able to count on him for consistent production out of the slot and he will leave Ohio State as the school’s all-time leader in receptions. He is a nifty and smart receiver that is able to run a variety of routes from the slot and is highly capable of finding the soft spot in the zone.

Hill faced a high volume of soft coverage and zone coverage in college but his high football IQ always led him to the soft spot in the defense. This is a receiver that understands what the defense is giving him and how to take advantage of that. A critical component of being an effective slot receiver is working over the middle of the field and finding free territory for his quarterback and as his 201 career receptions show, this is an area that Hill excels in.

The Ohio State receiver also ran a variety of different routes from the slot and was a very smooth route runner. He puts pressure on slot cornerbacks by stemming his routes well. Watch as his freezes the slot cornerback on the play above before cutting inside for the catch and first down on this 3rd and seven.

A beautifully run out route on the play above by Hill. Watch as he immediately puts pressure vertically on the corner by selling a vertical route up the seam before cutting back out towards the sideline. Hill showed this same ability down at the Senior Bowl last month as he was able to use his quickness to win a lot of 1v1 drills.

Another great example above of how Hill wins his releases off the line of scrimmage. Watch as he once again puts vertical pressure, this time towards the sideline before working his way up the seam. He is able to freeze the cornerback and open his hips which gives him an easy release up the middle. The ball does not come his way but if it does, it is likely a sure touchdown as there does not appear to be anyone nearby over the top.

Slot receivers must be able to create yards after the catch. It is one of the top requirements of the position and Hill shows that has some lateral agility to make people miss over the middle. He is very elusive and quick and when given space, he will be tough to square up on.

Now Hill does have a few highlight reel grabs but he does suffer from the odd drop every here and there. Noticed this down in Mobile last month as well and while it is not a huge issue, it is something that will have to get cleaned up if he wants to break through his glass ceiling.

Speaking of glass ceiling, Hill is very quick and shifty but he is not going to ”wow” anyone athletically. He does not have top end speed as he is quick rather than fast. He faced a ton of soft coverage in college and a lot of receptions were near the line of scrimmage from what I saw. While he did a good job stemming his routes on the plays above, he is going to have to prove that he can do it against tighter and more physical coverage at the next level.

While his ceiling may not be as high as some of the other top slot receivers in this year’s draft class, Hill is going to deliver consistency, which is what he delivered throughout his entire collegiate career. The Ohio State receiver is a quick and smooth route runner who understands defenses and knows how to set up his routes for success. His quick feet put a lot of vertical pressure on opposing cornerbacks and this will allow him to run a variety of routes out of the slot. Once again, he may not be a jaw dropping prospect but there is no question that Hill has what it takes to be a producer at the next level.

Games Watched: vs Clemson, vs Michigan State, vs Minnesota (2018)