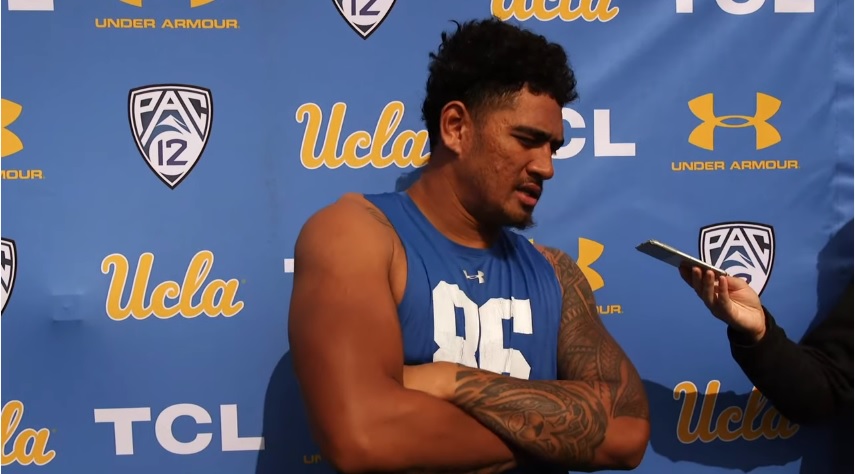 He started his collegiate career at Michigan but transferred to UCLA to play closer to home. He’s battled some weight issues and was listed at 287 pounds in 2016. The move back west seemed to do him good. He has improved physically and on the field and showed how much improvement a player can make in one season.  He lined up in the slot, wide, inline and in the backfield and half of his reception in 2019 came in the last 4 games.

In the passing game, he has good quickness from a two point stance and improved quickness from a 3 three point stance. He as solid acceleration downfield and out of his break and has a little shimmy to his game. He was solid dropping his hips and can use head and shoulder fakes at the top of the break as well as physicality to create space. He was used within the whole route tree and did a lot of his work in the middle of the field on Digs, Posts, Seam routes and showed solid awareness vs Zone to find open areas. His hands are good catching away from his body and adjusted smoothly to balls around his frame. He has solid long speed when he gets out in space.

Vs Oklahoma, inline to the left he runs the seam. He shows good agility to avoid the defender at the top of the route and ability to adjust to the ball behind him.

Vs Oklahoma, inline to the left running a post pattern and adjusting up to make the catch.

At USC he takes a little In route and turns it up field for a touchdown showing enough speed to keep the defenders in his wake.

At USC, he is lined up in the front of the bunch to the left and will run up the seam for a big gainer.

He was asked to Pass Pro more as the season went on and it’s a work in progress but the results were promising.  He was uses on slide blocks versus the man on the end of the line and was given more opportunities to block one on one late in the season. He works hard to control his man and can be used out in front of screens as well.

Vs USC, he is lined up inline to the right and shows a solid punch, will swipe the outside arm of the defender and then use a long arm to hold him off.

Vs California, here is a sample of where he got to by seasons end. He’s inline to the left and will have the edge one on one mirroring him nicely up the arc.

He doesn’t have explosiveness out of his break or an extra gear after the catch and didn’t show a great ability to break tackles or make people miss.  On passes his way you’d like to see him attack the ball more rather than let it come to him and use his body better to box out smaller defenders. After catches by teammates, he needs to block more and spectate less.

In the running game, much like his pass blocking there were big improvements in his run blocking as well. It wasn’t pretty or effective early in the season however the effort he made to improve as an inline blocker was evident.  He displayed very good effort in one on blocks to move his defender and wall off running lanes and solid lateral agility to Zone block.  He showed good leg drive and hand placement on down blocks to move defensive lineman and agility and mental processing to climb to the second level.

Vs Colorado, on the left wing he’s going to be one on one with the LB and get a good push downfield.

Vs California, he’s inline on the right side and will gallop step into the DT getting a good push before climbing to block the LB.

Widening his base would help with balance and make it harder for defender to get around him. He needs to be more consistent with his hands instead of leading with a shoulder. He will turn his head to look back at the runner instead of focusing on his block. I would like to see more effort downfield to make and extra block when a runner gets to the second level.

Color me intrigued by the growth and potential of Asiasi in a less than loaded tight end draft class. Despite only one year of production he is a reliable pass catcher who can be lined up all over the field and used on all three levels. He has shown good aggressiveness to pass and run block and has improved to the point where it looks like he may enjoy it now. He’s not explosive and didn’t show the ability to create after the catch but it’s hard to find a tight end that can do everything. I’m curious to see his Combine numbers and if he impresses there he may hear his name fairly early in the draft.

Games Watched:  2019 – Vs Oklahoma, At Washington State, Vs Colorado, At USC, Vs California