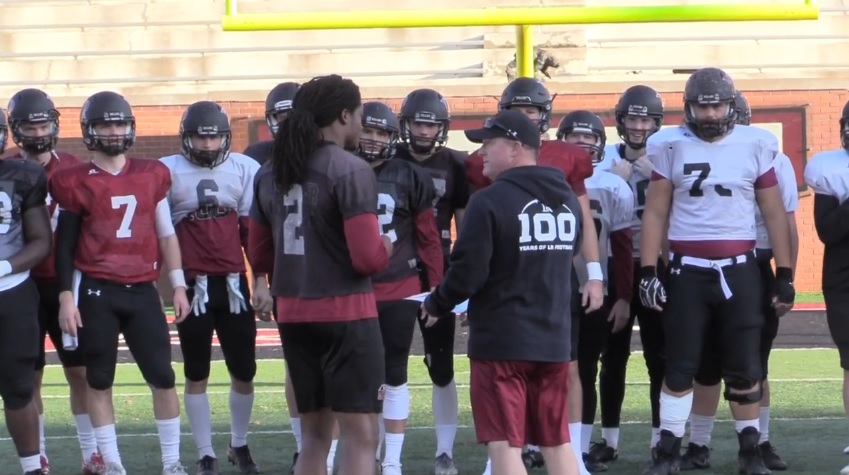 Kyle Dugger will be the first player drafted from Lenoir-Rhyne since 2001. The first thing I noticed when you put on the film is his size compared to other players in Division II. He looked like a defensive end playing safety at that level. He played in different coverages including Cover 1, Cover 2 and Man in the slot and was a very good punt returner with contact balance and speed.

Against the pass, playing from the deep safeties positions he shows good mental processing between run and pass, reads the QB and flows to the ball smoothly. He played to the field side in Cover 2 showing the athleticism to cover the wide side of the field. He shows good break on balls in front of him and closes the distance quickly. He will attack the ball in the air and displays good ball skills to play through the catch to try to separate the ball from defenders. In Man coverage, he played off the ball, was physical at the break point and looked comfortable covering TE’s.

At North Greenville, he going to sit on the Out route of the TE and will beat him to the ball for the interception.

At Mars Hill, he’s in Man coverage on the tight slot. The WR will run and Dig route but he closes fast and gets a hand in to break it up.

At the Senior Bowl, he’s down in the box over the TE and will trail him on the crossing pattern and makes a nice play to reach around the backside and pull the arm of the TE to prevent the catch.

Due to tape limitations I didn’t see a lot of him playing Cover 1. He looks to have the speed but I can’t comment on angles or reading of deep coverages. He’ll have issues trying to cover WR’s in the slot until he improves his techniques and ability to mirror their quickness. He showed some coverage confusion in the Senior Bowl, which could be expected, due to the jump in competition. Coming downhill, he’ll need to breakdown quicker at the next level.

At the Senior Bowl, he looks confuses as to what is his assignment. He is in the box over the TE. The TE goes inside across the formation. He follows the RB on the run fake. Then head back inside as the RB runs the wheel leaving him open.

At the Senior Bowl, lined up in the near slot against the big WR. There’s some confusion in the coverage as he thinks he and the corner will swap and the DB stays in Man.

Against the run, he showed a willingness not only to help but also to bring some physicality when taking on blocks or making tackles. He will fill gaps even down in the red zone and is a strong tackler.

At Mars Hill, he’s lined up in the middle of the field and will attack downhill and make the play short of the goal line.

He can improve his angles to the ball on the outside to not come in to shallow and would like to see a more consistent pursuit to the ball.

At North Greenville, a flag ends up being thrown and the return is called back but take a look at him break a couple tackles and watch the burst once he hits the 50.

Physically he looks like an NFL player with comparable size to players like Jamal Adams, Landon Collins and Keanu Neal. He has good athleticism, speed and will support the run along with a lot of experience on special team covering and returning punts. In the Senior Bowl they used him in different coverages but was most often used in the box to the strong side.

The jump in competition will likely cause some growing pains particularly in the passing game. If you’re looking for someone to start immediately as a deep safety you’ll have to temper expectations or look elsewhere. He could be used early in sub packages in the box and to cover TE’s and will be an immediate contributor on special teams. He’ll have a lot to learn but NFL teams love bringing in the H/W/S guys with the measureables with the hope of molding that athleticism.