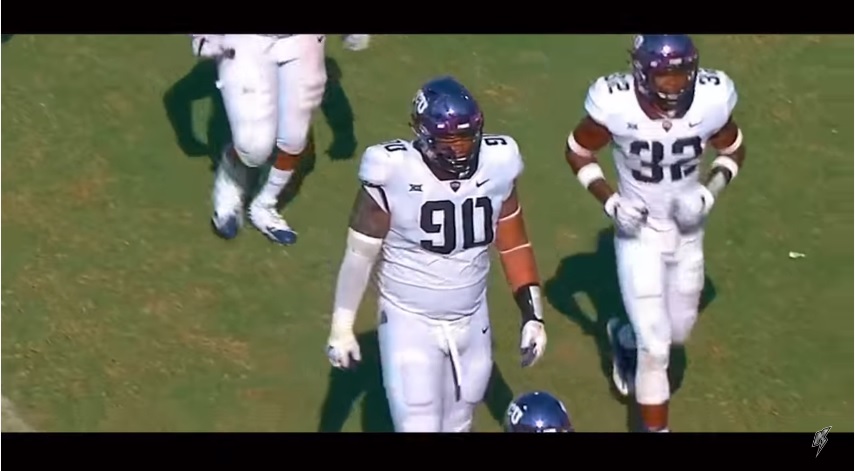 – Good frame, not a squatty body like a lot of nose tackles, built for the NFL
– Impressive overall combination of athleticism and power
– Quick first step and burst off the line of scrimmage, helps him overcome average functional strength and be able to push the pocket on his bull rush
– Above average athlete with excellent hip/ankle flexibility, change of direction is impressive and shows ability to corner against guards to win the edge and turn upfield
– Capable one-gapper who can play up duo blocks/double-teams when he times the snap
– Flows well against zone run schemes
– Good hand use and variety of ways to win, swim/rip are top moves
– Shows effort and chase running to the ball when the play is away from him
– Smart player and communicator along the front
– Consistent player with proper leverage and pad level, doesn’t get too tall
– Works to stay square to the LOS against base blocks
– Experience playing in an odd front, work as the 1 and 3 tech

– Only average functional strength who can struggle to hold POA against double-teams along the interior
– On the ground a little more often than preferred, will show too much forward lean and get over his toes, causing him to lose balance
– Effort could be a bit better, don’t consider him fanatical
– Needs to show a more consistent impact on his punch, placement needs to be more accurate and hands can get a little high and wide as a pass rusher
– Only a moderate level of production, low amount of career sacks (even in high school), NFL ceiling could be limited
– Will have some medical concerns he’ll have to answer

Ross Blacklock is an impressive player who is very similar to Oklahoma’s Neville Gallimore. I think I like Gallimore more but Blacklock possesses similar, Javon Hargrave-ish traits. Blacklock is a little bigger, lacking Hargrave’s bubble butt, but is a solid athlete who translates that into power and makes for an impressive interior defensive linemen.

His first step and flexibility are his best traits. Ability to stress offensive linemen, causing them to double-over. Blacklock has a remarkable ability to sink his hips, turn the corner, and work upfield. Here’s a great example.

He’s a twitched up player relative to the position whose wins are decisive and impressive.

His issues aren’t glaring. I do wish he was a bit stronger and he can get overwhelmed in moments. Maintaining a proper base will be key. Can get top heavy and lean too much, sending him to the ground as a pass rusher. He also isn’t incredibly stout versus the run either. Is he a classic nose tackle? No.

And that leads into the big-picture concern. Where will be excel? As a run stuffer? Not in the traditional, two-gap sense, though he could thrive in a more aggressive, gap defense. As a pass rusher, there’s something there but it’s never materialized into heavy production. From his high school senior year through his college career (granted, that’s only been two years), he’s never had more than three sacks in a season. Will that change in the NFL? Perhaps but it’s rare players get significantly more productive as the play against the best of the best.

Still, Blacklock is a talented player and it’s more than fair to say his best football is ahead of him of 2018 was lost due to injury. If Pittsburgh is looking for value at #49, and Gallimore is off the board (I suspect he will be), Blacklock may be in play. Force me to offer an NFL comp and I’d give you Dallas’ Maliek Collins.

Games Watched: at Purdue, vs Baylor, at Texas Tech, vs West Virginia