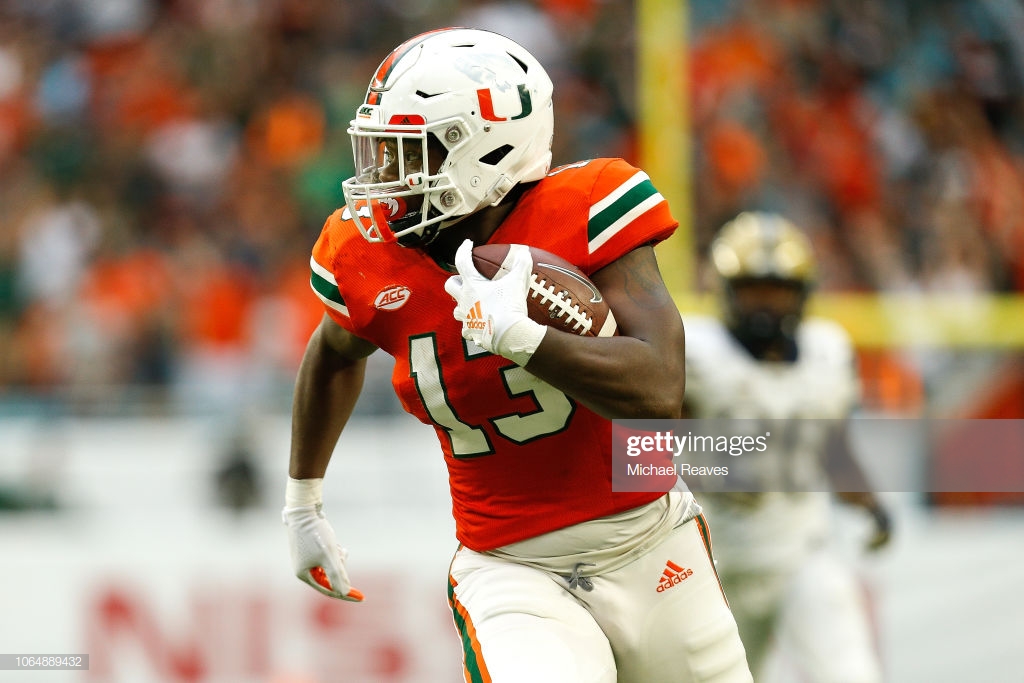 Running backs are an important part of today’s NFL and while the big name running backs always soak up an extraordinary amount of attention before the draft, there are always more than a few mid-late round guys who end up being consistent contributors at the next level. Miami running back DeeJay Dallas has a chance to fall into that category. While he never put up huge numbers, there are many traits that lead suspicion to him having some upside.

The best trait that Dallas has working for him is his contact balance. The Miami running back plays like a pinball, just bouncing off however many defenders get in his path. Dallas carries a great amount of contact balance and that is a great survival tool for his fit at the next level. He has great lower body strength as he rarely goes down on first contact and is able to carve out a high number of yards after contact.

Maximizing yardage is key for running backs. Being able to generate yards after contact is important but knowing how to set up and use your blockers is also another must have trait for running backs. Dallas showed a good feel for setting up his blocks at the second level during his final season as a Miami Hurricane. Watch how Dallas uses his blockers on the play above in order to clear a lane near the sideline to pick up the first down.

Dallas only had 28 career receptions during his time at Miami but do not let that fool you. There is more than enough upside with his ability to be a legitimate receiving threat out of the backfield. A former WR who converted to running back during his freshman year, the Miami running back has natural hands and can make some serious noise as a receiving threat due to his ability to break tackles. It showed in spurts during his collegiate career but Dallas has the tools to be a third down back at the NFL. Watch him make a smooth one-handed catch and then break three tackles on the way to a huge catch and run on the play above.

Of course, receiving is only half the battle to be a complete running back. These backs must also be able to pass block as well and Dallas shows a tremendous amount of tenacity when he is tasked with pass blocking. He is not afraid to put his body on the line to protect his quarterback. He anchors well and picks up incoming blitzers just as well also. There is some real potential there for Dallas to be a quarterback’s safety option on third downs, whether as a check down option or as a blocker.

Though he comes equipped with some very valuable traits as a runner, there is still some room for improvement in Dallas’ profile. He does not have elite burst which limits his ability to hit the line of scrimmage with authority. He will need to find a way to add some more burst and explosiveness if he wants to one day grow to be workhorse back. There are too many times where he is slow to hit the line of scrimmage and that is going to affect his potential outlook.

Dallas is also not a speedster by any means. He ran a 4.58 40-yard dash at the NFL Combine and it shows on his game tape. He does not feature a second gear and sometimes struggles to outrun defenses to the perimeter as he is just not fast enough to get there. This may be a huge obstacle for him as he enters the NFL as NFL defenses are also much faster than defenses at the NCAA level.

Overall, Dallas is going to be more effective between the tackles, where he can use his contact balance in order to generate yards after contact. He also has upside as a receiving running back due to his past experience as a receiver and pass blocking ability. While he may not have a very high ceiling due to some athletic limitations such as speed and burst, he should be able to contribute to his future team in a number of ways.

Games Watched: vs Florida State, vs Florida, vs Toledo