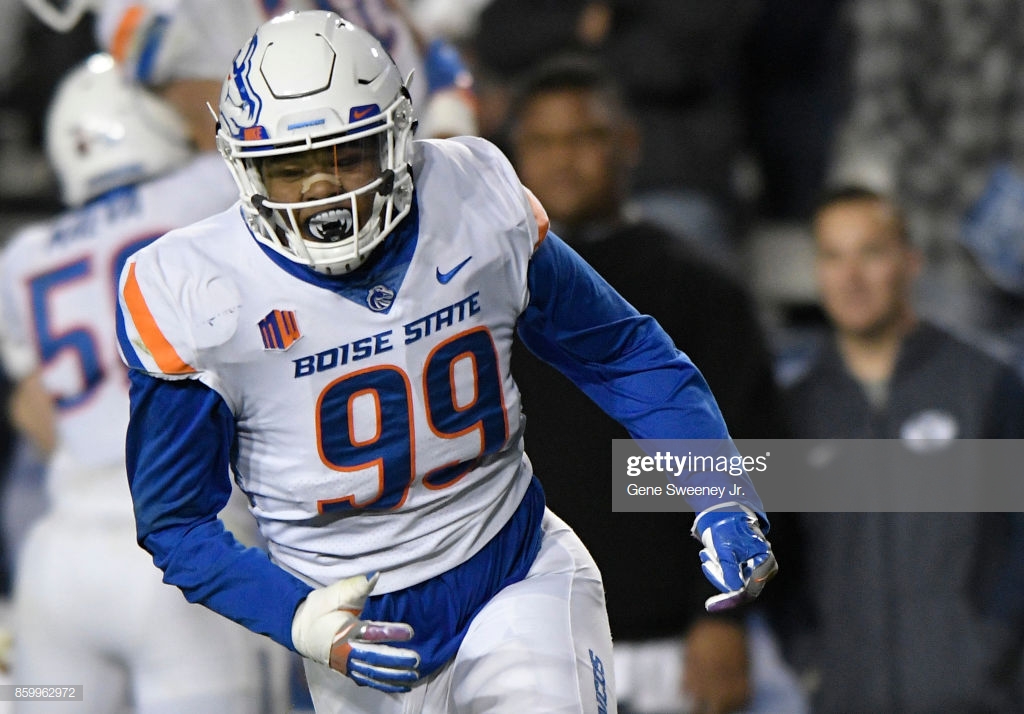 Boise State pass rusher Curtis Weaver will enter the 2019 draft as one of the more decorated edge rushers in this year’s class. No player in Mountain West history has recorded more sacks than the Boise State pass rusher and he is coming off three consecutive First Team All-Mountain West selections. Weaver’s numbers build a pretty good case for his draft stock and his play on the field offers a lot more promise as the Boise State edge rusher shows a lot of important traits that teams will value.

For a player that has a very solid frame – 6’3, 265 lbs, Weaver moves exceptionally well for his size. He plays with a lot of quickness and speed. The Boise State pass rusher won frequently with his quickness and burst off the line over the last number of years as he was simply too quick off the ball for offensive tackles to stop. With his burst, many offensive tackles struggled to even get their hands on him as the Boise State pass rusher frequently just blew right by them, which he shows on the play above.

While Weaver did not get home on the first example, he does so on the play above. If speed kills, then Weaver slaughtered opposing offensive lines this year as he consistently showed tremendous burst off the snap. Another item to note is that Weaver lined up on opposite sides on each of the two plays I have shown above. The decorated pass rusher also brings positional versatility as he can line up as the ROLB, LOLB or with his hand in the dirt. This will only increase his value in this year’s draft.

Speed is not the only way that Weaver can get to the quarterback as he comes equipped with high amount of knowledge when it comes to using his hands. He typically uses a swim move to his advantage as he works through opposing tackles. Watch on the play above as he quickly works through the Washington right tackle as he tries to engage with him. Not only is the Boise State pass rusher typically the first to initiate contact but he shows the ability to quickly negate any initial attempt to be neutralized.

Here is another one of the many pass rush reps that Weaver flashed on tape this year. While it did not result in a sack, the process here is much more important than the result. The edge rusher works through not one but two offensive linemen to get into the pocket. First, he swims over the right tackle’s block before putting the right guard on the ground. Even when he is not getting after the quarterback, Weaver shows promise in his abilities.

Circling back to Weaver’s large frame now and why it is so important to his positional flexibility. Should he be drafted by a team employing a 3-4 scheme, the Boise State pass rusher will be required to hold his own against the run. Well, thanks to his size and strength, Weaver shows good ability to anchor and set the edge against the run. He shows it above and while it is against a tight end, it is still rare to find an example of Weaver being washed out of his assignment. In fact, I do not think I witnessed it all over the course of the tape that I watched.

Another requirement of being a 3-4 OLB is being able to drop in coverage and luckily, this is something that Weaver did quite frequently over the course of his career. While he may not shatter any expectations with his athleticism, he did more than just a fair job when it came to dropping into coverage.

When it comes to his limitations as a pass rusher, there are a few concerns with Weaver’s game. He wins by blowing past tackles on the edge or swimming by them with his arms, but he lacks flexibility. He did not really show any bend or flexibility around the edge, but this could be something that is polished up as he gets some NFL coaching. A counter move is also a trait that I would like to see the Boise State pass rusher add. Though he has these concerns, the positives still outweigh the negatives.

Another area of improvement to briefly touch upon is Weaver’s ability to make tackles in the open field. It is hard to not notice as the edge rusher misses a lot of tackles when he has the ball carrier squared up one on one. This may be due to his lack of flexibility and lower body size, but it is a concern nonetheless.

No player becomes the most decorated pass rusher in the Mountain West Conference by accident and Weaver has more than enough traits to value. His speed off the edge and advanced ability to use his hands to win are going to make many teams look at him. Really think there is a future for him as a pass rusher in a 3-4 scheme as not only can he get after the quarterback but he can also anchor well and has experience dropping into coverage.

Games Watched: vs Florida State, vs Washington, vs UNLV