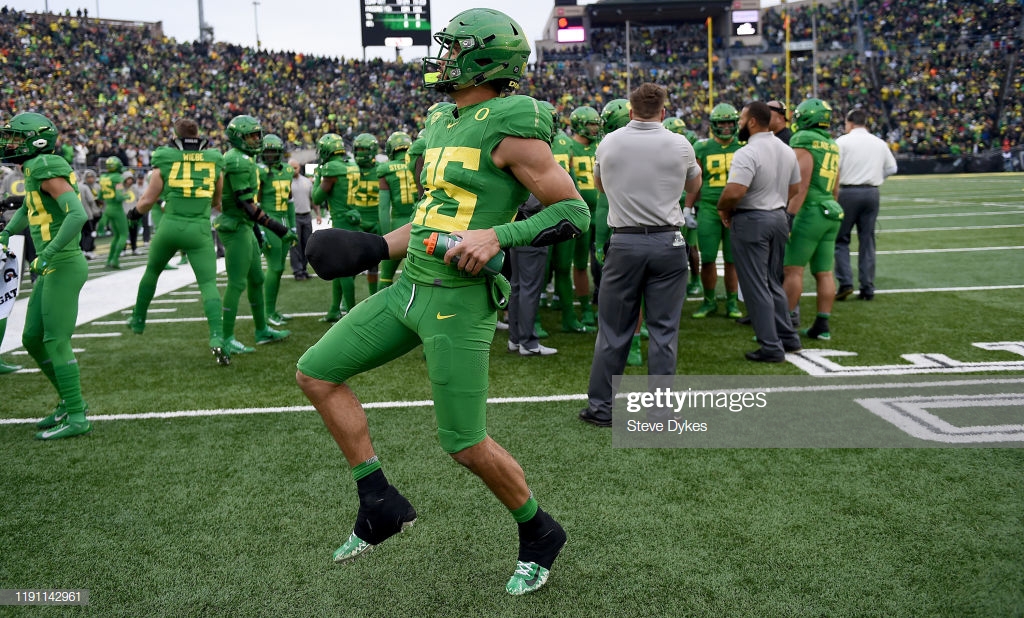 Size is only a problem when it’s a problem. It does not seem to be for Oregon linebacker Troy Dye. The 6-4 linebacker was listed as a scant 226 pounds by Oregon as a senior, which is alarmingly light considering his 6-4 frame with long, lanky limbs. Yet the former high school safety has embraced the role of linebacker during his four seasons and plays with the physicality and strength necessary to execute most of the duties of the linebacker position.

In fact, one Dye’s strengths as a four-year starter is his ability to stack and shed linemen in pursuit of the football. While a hand injury slowed him down during his senior year, when he’s healthy he’s exceptional finding the football.

Dye’s calling card as a linebacker are his vine-like arms. He is able to control bigger blockers by keeping them at bay with his reach, before shedding to engage with the ball-carrier. His run fits are generally good and he does a very good job of attacking blockers on the proper shoulder in order to clog running lanes between the tackles. He also has the range to chase to the sideline and bring the ball carrier down.

The California native also tends to punch above his weight and does not generally give ground in the run game. In fact, his high-end plays are very impressive.

There is also a consistency issue with Dye where he does not always get a clean read on the snap and will be too passive when reading his keys. He does not trigger downhill and create negative plays for the offense in the running game. This leads to more catch and tackle type of plays instead of tackle for loss. This couple with his undersized frame is a concern that may lower his value on draft day for some teams.

The good news is that Dye’s frame looks like it could support more mass. His waist does not taper to the point of pinching off potential growth to his lower body and with his natural strength and tenacity, he is not far off from being a complete run defender.

The most exciting part about Dye’s abilities are that he maintained his safety skills as he’s grown into his frame as a linebacker. He’s able to cover in the short area in zone defense and more impressively, in man coverage against tight ends.

While he’s got to clean up his footwork and become more efficient in his coverage, he shows the high-end ability to stay with very talented receivers in man coverage. His arm length and speed make him an ideal candidate to be a ‘tight end eraser’ at the next level. These abilities give a defensive coordinator the ability to stay in base defense while covering spread formations that are proliferating the NFL.

To be clear, Dye shows good ability, but lacks the consistency and overall fluidity in his movements to match up with the best at the position. Yet he’s more than capable of being a very good off-ball linebacker with the versatility to play in space, or to line up between the tackles. His coverage ability (when he cleans up his mental mistakes) is more valuable than any deficiencies he may has as a run defender. He’s more than worth a mid-round pick for a team looking for a coverage linebacker who shows the heart and technique to hold up in the run game.