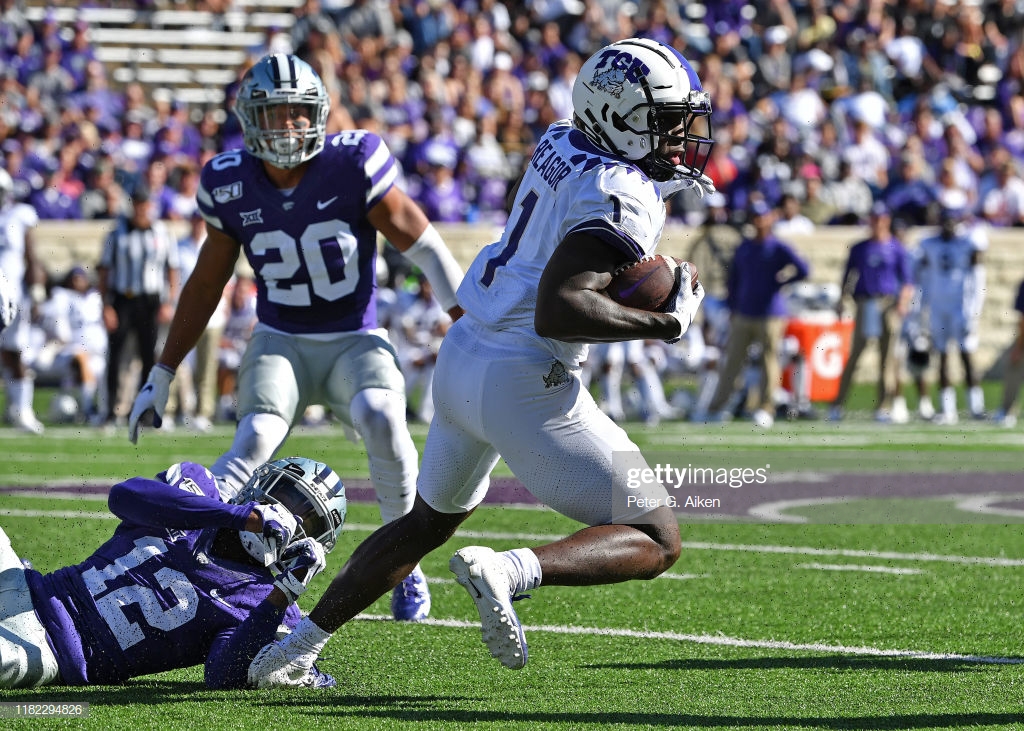 – Not a big frame but has good bulk and added weight from listed to Combine (listed at 195 pounds at TCU)
– Good hand size for frame (9 1/2 inches)
– Excellent straight-line speed who builds it up quickly, great burst and acceleration
– Fluid, smooth route runner with great nuance in his routes to create space at the top, knows how to find CBs blind spot
– Capable of winning against tight man coverage, stacking corners and winning the route early on vertical concepts
– Threat with open grass, changes direction quickly and can make defenders miss, plus stop/start ability
– Versatile player who got involved in multiple facets of the offense, including the run game, natural with the ball in his hands
– Finds the ball in the air, ability to adjust and shows body control to make difficult catches downfield
– Capable of making spectacular, high degree of difficulty plays
– Shows good effort overall, even running down INTs/turnovers
– Punt return value and production, minor kick return experience/value
– Strong NFL bloodlines

– Not a physically imposing receiver
– Can get beat up at the line of scrimmage against true press/Cover 2 reroutes, didn’t see it a lot but struggled when he did
– Inconsistent hands with too many drops, especially given relative low volume/usage
– Struggles to make contested catches, especially in traffic over the middle of the field and too easily separated from ball
– Goes down too easily on contact, not as strong as you’d like, and limits YAC opportunity
– Spent most of time on the outside, didn’t see much work in the slot
– Up-and-down production, went quiet too often, feast or famine games (five games under 30 yards in 2019)

Reagor is someone to check out considering the Steelers reportedly met with him at the Combine for a formal interview. And it’s easy to see why there’s interest. He’s an offensive playmaker, an aspect that unit missed in Pittsburgh in 2019. They had just 37 completions of 20+ yards, dead last in the league (the QB situation had plenty to do with that, I know).

Reagor’s speed is legit and he should run, at the least, in the low 4.4’s (his added weight may slow him down a tad). But it’s just as likely he dips into the 4.3’s, making him one of the fastest receivers in a deep, diverse draft class. You can see his straight-line speed, which takes no time to build up, here, though I’ll grant the corner was clearly looking in the backfield the whole time. He’s the dude flying at the bottom of the screen.

In the open field, he reminds me of Diontae Johnson. Only faster. Natural with the ball in his hands though I’d like to see him get stronger to run through more tackles. Here’s his 70 yard PR touchdown against WVU this year.

He’s capable of making spectacular catches downfield with plus body control. Check out this double-move followed up by a diving, over-his-head grab.

But too often, his hands let him down and his slighter frame caused problems going over the middle. Struggled in some contested/jump ball situations, a highly inconsistent part of his game. Couple of examples.

It’s hard to project where receivers will go in such a deep class. But if Reagor is going to run in the 4.3’s, it’s hard to see him falling late into even Day Two. Reagor is explosive, a playmaker, and can help in a lot of ways (receiver, punt returns, gadget/WR runs). Like I said, some similarities to Johnson (size, change of direction, hands/ball security concerns) but Reagor is much faster. For someone faster, compare him to Andre Roberts.