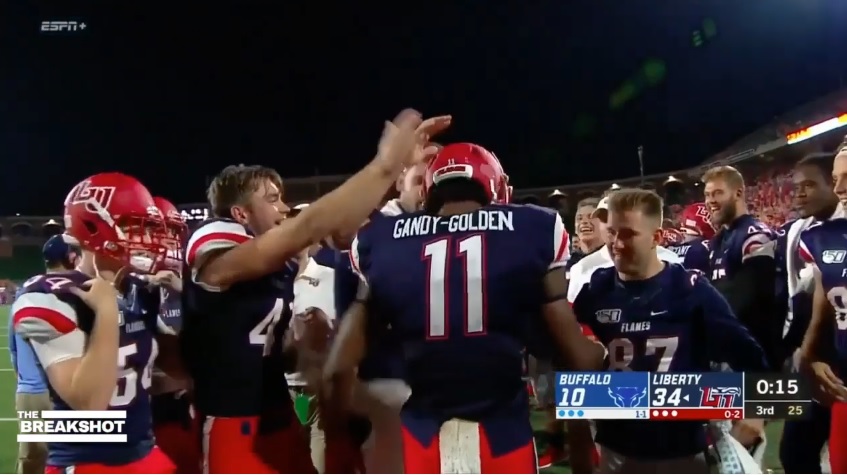 He has had a highly productive career at the one of the newer FBS programs that culminated with an invite to the Senior Bowl. He lined up primarily outside as the X receiver but was also used in the slot. He has very good size that the NFL loves though he has thin build and doesn’t look like he weighs 220+.

In the passing game, versus Off Man coverage he shows solid acceleration off the LOS with build up speed. He has solid quickness out of his break and is best at creating separation when he is able to manipulate the DB by getting him to open his hip or bite on fake. He drops his hips very well when selling deep routes to open up space on Comeback and Curl routes. Against Press, coverage he shows very good quickness with fakes and jab steps to get the DB to open up and has solid use of hands to get through jams with swipes and swims. Against Zone, he shows a good understanding of finding the open areas and sitting down.

He was used throughout the route tree but did his best work on Slants, Comebacks, Outs and Stutter and Go. He has good hands able to snatch the ball away from his body, make receptions in traffic or when contested. He can adjust to the ball well around his frame and has solid body control on sideline catches. After the catch he is tough to take down often dragging would be tacklers. Shows good play strength and want to as a blocker for teammates able to solidly stalk block and likes to add an extra push at the end of the play. He has good awareness in the scramble drill to find space and work himself open for the QB.

At Virginia, he gets in the area behind the zone and shows his ability to adjust to the ball behind him.

Vs Syracuse shows good quickness with a jab step to the outside to get the DB to out of position and is wide open on the slant. Redirects after the catch to the outside and drags defenders for over 20 yards.

Vs New Mexico, at the top of the screen he’s going to run and stutter and go. Very ability to drop his hips to stop the DB to allow him to get over the top tracks the ball well and drags the defender.

Vs New Mexico, he shows strong hands making the contested catch in the end zone.

At Virginia, at the top of screen running a comeback route.  Drops the hips, comes to a stop quickly and makes the catch. Ideally, you’d like him to work back to the ball a bit more.

At Virginia, he is lined up at the top of the screen and will run a speed out and make a one handed grab near the sideline for a touchdown.

Doesn’t have explosiveness out of his breaks limiting his separation against Off coverages and didn’t use physicality to create space. Didn’t show the extra gear to get over the top of defenses.  Needs to prevent getting bodied on go routes and taken out of bounds. His route running, like most college players, can use some improvement overall and when getting out breaks. There is room for improvement using his size to box out defenders. After the catch looked a bit like a baby deer on some plays gathering his legs under him before trying to create.

At Virginia, he runs a go route, can get over the top and the DB is in great position and uses his body to force Gandy-Golden out of bounds.

He has the size, has good hands, adjusts to the ball well and his hard to take down.  His route running needs work to improve his ability to separate and needs to learn how to use his big frame to his advantage along the sideline and when boxing out.  The speed is the question for me. The NFL loves speed and the NFL DB’s all have it.  I’m not sure if he has enough to win consistently on deeper routes. His combine numbers will have an impact on where he gets drafted.  I see him as receiver you can use on the short and intermediate routes who could be mismatch in the slot using his quickness to beat Press.