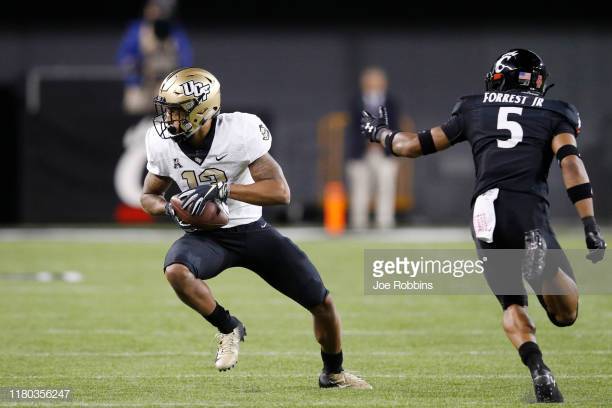 -Deep threat that creates ample separation late in routes to ultimately win
-Willing blocker with good form and strength in his punch and drive
-Thick, powerful lower half that allows him to run through arm tackles
-Flashes huge catch radius when asked to catch away from his body
-Possesses ideal body control to adjust to the football mid-route
-Varies releases off the line of scrimmage and rarely struggles with press coverage

-Body catcher with hands that are suspect and super inconsistent; at least seven dropped touchdowns over three years of film studied
-Limited, simple route tree consisting of slants, 9’s, and stop routes
-Not a burner by any means despite filling role of deep threat
-Struggles to play through contact at catch point and will rarely win 50/50 balls
-Despite lower half strength, not a big RAC guy and won’t create with elusiveness
-Athleticism is a concern for the position

-Played and started in all 37 games during 3-year career with Central Florida
-Finished 3-year career with 152 catches, 2,447 yards and 23 touchdowns, averaging 16.1 yards per catch
-Posted line of 72 catches, 1,241 yards and 12 touchdowns in 2019
-Played on special teams during freshman year, recording 5 career tackles on kick and punt coverage
-Invited to 2020 NFL Scouting Combine in Indianapolis

Central Florida wide receiver Gabriel Davis is a name well known within draft circles, but there was always a mystery about his tape and how exactly he produces.

Throughout my film study of the Knights’ deep threat, I came away intrigued by his combination of size and length, but was mostly baffled by his ability to consistently win deep despite not being a burner by any stretch of the imagination.

Some receivers just have a knack of finding an extra gear late in routes, and that’s what Davis has. He’s not a 4.4 guy, and isn’t a twitched-up athlete, but he finds an extra step late in his routes – whether that’s a go route or a slant route – that allows him to win and win big.

Against Memphis in 2018, it was clear Davis wasn’t one of the best athletes on the field when UCF’s offense was out there, but he found a way to dominate.

On this short post route, Davis creates just enough room at the top of his stem to take this pass and then somehow outrun the Memphis defensive back for the touchdown.

Davis’s footwork is really solid, especially when working his release off the line of scrimmage. He’ll get onto the defensive back’s toes in a hurry when they’re lined up in press, and then his hand fighting is well developed for this stage of his career, allowing him to stay clean and win quickly.

This UConn corner was no match for Davis all game long. Watch the footwork, the burst inside and the clean wipe he pulls off to get an easy release inside. I also really like the body control to twist around and snag this football thrown behind him for the touchdown.

As a blocker, Davis has the want-to and does well in stalk blocks.

He’s at an advantage here against LSU in the PlayStation Fiesta Bowl, as the defensive back has his back turned to the play. But once he engages, Davis does a great job of locking out and driving the corner into the end zone, allowing his teammate to score with ease.

Yes, the LSU corner does fall down here, and Davis certainly isn’t dynamic winning at the top of the route as he labors to slow and turn, but check out the drive he has back to the football and the late flash of the hands to pluck it in front of his chest. That’s great to see.

However, you’ll get the clunker more than the good technique with Davis.

Again, you see the lack of explosion and athleticism in his hips and he labors to stop and spin. Here though, he doesn’t flash his hands at all; he goes for the body catch and it results in an ugly drop near the first-down marker.

Final thoughts on Davis – he’s a good deep threat that separates late, and he has some impressive college numbers, but I just don’t buy right now that he’ll win consistently in the NFL with the ways in which he won in college.

He’ll need to work on hand catching in the NFL, and needs to develop an actual route tree. If he can also add some more strength to win contested balls, he could develop into a solid X receiver and play a No. 2-3 role in a good offense.

He’s a project out of the gates, but can contribute on special teams while a team tries to groom him.