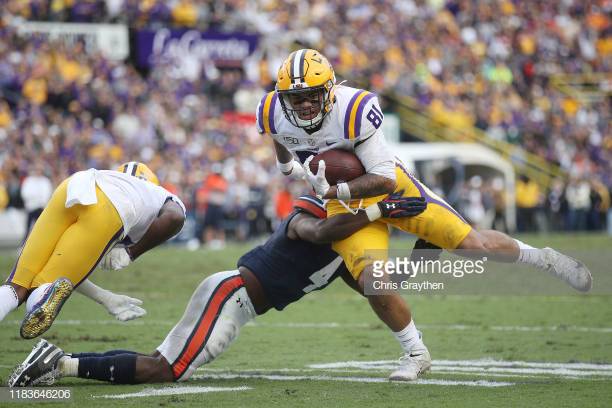 – Plays bigger than frame
– Physical player with clear “want to” in run game but also shows technique as a blocker
– Understands leverage and plays with proper pad level and hand placement to minimize size concerns against bigger DEs
– Nasty demeanor, willing to do dirty work, one of the most effective and physical chippers you’ll find at the position
– Soft hands and consistently makes contested grabs over the middle, able to adjust to balls thrown outside his frame
– High football IQ capable of finding soft spot against zone coverage, makes sight adjustments based on coverage and knows how to get open vs zone
– Productive in the biggest games, got better as season went on
– Versatile and moved around the offense, experience in-line, slot, and split out wide
– Asked to pass protect and looks competent, plays with good base and knee bend, keeps his feet moving laterally
– Excellent NFL bloodlines

– Undersized with questionable length (will have to wait for Combine) and overall smaller frame than you’d like
– Functional strength but can be overpowered at the point of attack
– Average to below average athlete, not a vertical threat and made almost all his plays underneath, only plays over the top came against busted coverages
– Build-up speed runner who needs open grass to get going
– Struggles to beat press coverage and separate from man coverage downfield, not a sudden player at the top of his route, catches are routinely going to be contested and he’ll have to win with physicality
– Offers little after the catch, won’t run away from anyone or break many tackles
– Limited experience out of a three-point stance (four times in the four games I watched, one being a kneeldown)
– Only one year of production, and even those numbers weren’t eye-popping, little starting/playing experience making him a relatively difficult evaluation
– High school and college journeyman who bounced around an unusual amount of schools
– Some medical concerns, missed an entire season due to injury

– One year of serious playing time
– Career: 53 receptions, 619 yards (11.7 YPC) 5 TDs
– 2019: 47 receptions, 570 yards 4 TDs
– Began college career at NC State, transferred to LSU for 2017 and sat out year due to NCAA rules
– Missed all of 2018 with a foot fracture which required at least two surgeries
– Recruited by Matt Canada to NC State, transferred in part because Canada was let go by program
– Attended five different high schools
– Father is Randy Moss

When draft day comes, Moss figures to be one of the hottest names in connection to the Steelers. He checks all the baseline boxes. Underclassmen from a Power 5 conference with elite football bloodlines. So many previous first round picks – TJ Watt, Devin Bush, Terrell Edmunds, to name a recent few – have fit that bill.

In terms of the position, Moss fits what the Steelers are looking for as a physical, put-your-face-in-the-fan blocker that’s a must for Pittsburgh. He isn’t the biggest nor the strongest tight end in this class but he’s intense with a physical, nasty demeanor and overall, an effective blocker who consistently plays with proper technique.

Just to give you an idea, he’s one of the best pass protection chippers I’ve come across. That alone doesn’t make you a great blocker but it shows a “want to” that’s vital to have. The rest can be coached.

And he gets after it as an in-line blocker too. There are times where bigger DEs can overpower him but he makes up for that with technique and leg drive that’s impressive for a college player. Watch him climb to the second level and dig out this MIKE linebacker. Springs a big run for the back.

As a receiver, Moss is an old oak cabinet. Sturdy and reliable. Does a great job making contested catches over the middle. He’s also a smart route runner who finds soft spots against zone. One of the most impressive plays on tape was his first TD in the National Title game. It doesn’t look like much, a wide open five yard curl but it looks like Moss broke the route down. It was supposed to be a smash concept (corner/flat) but with the DB taking the deep third, Moss settled down in open grass, showed his numbers, and had an easy touchdown. Great mid-route adjustment.

Now, it’s not all sparkling. While he should be regarded as a strong blocker, he actually aligned in a three point stance less than guys like Brycen Hopkins and Jared Pinkney. Most of his in-line work came in a two-point stance. Something that can and will be taught but there will be a learning curve until he gets comfortable.

The bigger issue is the upside. Moss wasn’t a vertical threat. If he won over the top, it was due to a busted coverage like his long TD in the first playoff game against Oklahoma. Moss is an average athlete who I doubt will test very well and is limited after the catch. He’s physical and seeks contact but he’s not breaking many tackles or picking up a lot of YAC. Just not his style. Watch him struggle to separate on the right side of this clip against Clemson.

Then there’s the evaluation. Just one year to go off of and his production wasn’t sterling either. He’s had an…interesting football career. Five different high schools, two different colleges, only one year of actual production. That isn’t disqualifying but there’s a lot for scouts to try to dig around and find out when it comes to the interview process. Medicals with that foot injury will have to check out too; he had a second surgery in 2018 because the initial procedure didn’t heal it properly. What are the long-term effects? Could vary from team to team.

All that said, he’s someone I expect to be on the team’s radar for all the reasons I mentioned at the top. There’s another layer to consider too. Matt Canada recruited him to NC State before getting fired and was one of the reasons why Moss transferred to LSU. He explains why he left in this Charlotte Observer article.

I’m guessing Canada will have some insight on Moss and though he doesn’t have direct pull to turn in the draft card, he’s also just the QBs coach, not the OC, it’s going to help Moss’ odds of landing in Pittsburgh.

Overall, I like Moss. There’s a worry to his upside but his game is still ascending after playing so little the past five years. And I’m betting the Steelers will like him even more.

Games Watched: vs Florida, vs Auburn, vs Oklahoma, vs Clemson