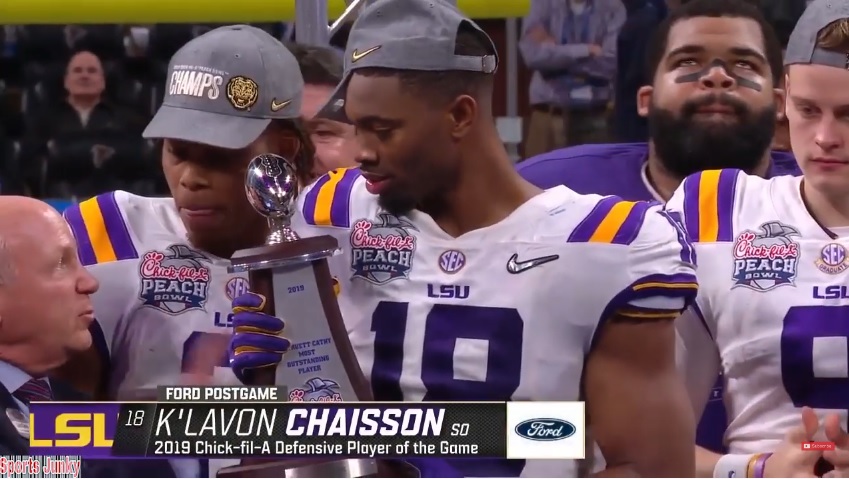 There are very few times that I am personally willing to bet on “upside” when it comes to college football players. If you haven’t shown the ability to consistently play with the ability necessary to make in the NFL, why would you suddenly do so at the next level?

K’Lavon Chaisson is an exception to that rule. The LSU edge defender has all of the physical skills necessary to be an elite defender in the NFL, despite less than 10 sacks in his college career. Chaisson has the size, measuring in at 6-3, 254 pounds at the Combine, to go with incredible speed, movement skills and tenacity to be a complete defender.

We’ll start with Chaisson’s calling card, his speed. The redshirt sophomore defensive end is a threat to turn the corner on just about every tackle he faces. He has the explosive burst off of the line of scrimmage and good agility to be able to bend and dip around the corner. When he uses his counter off of this and attacks inside, it can be deadly.

Chaisson is also a good run defender who can both hold up at the point of attack, and slip blocks in order to get to the ball carrier. Despite his low sack totals, Chaisson has been productive in the running game, with 13.5 tackles for a loss last season for the National Champions.

The important part is that Chaisson shows good power and lower body strength in order to handle blockers. We’ll get to why in a moment.

Not only is Chaisson a good run defender, he’s also a legitimate coverage defender who has great movement skills and feel for dropping into space.

If there’s one play that sums up how athletic Chaisson is, watch him run down future top 15 pick Ceedee Lamb on this play

The biggest problem is that Chaisson’s strength, block shedding ability and natural athleticism don’t seem to translate to his pass rushing at the moment. There is some kind of disconnect in the translation of his speed to power on pass rushes and it makes him incredibly easy to block for pass protectors.

Part of this might be that Chaisson is just young and is still fine-tuning his technique. He’s only played four full seasons of football, including high school. He also does not have very long arms for his height. While 32’ arms are acceptable, they may also tell the story of why he’s easily controlled by SEC tackles that have the footspeed and power to match him to the apex of his pass rush. It’s concerning, but even then, there are time that Chaisson surprises a blocker with a bull rush and wins

Being a one-note pass rusher in college is a huge red flag, but Chaisson displays enough skill, effort and fight that make it easier to bet on him progressing as a technician at the next level. With his athletic profile, he’ll likely be selected in the first round, even if his tape is closer to a second round pick.

Games Watched: @Alabama, vs Auburn, vs Oklahoma, vs Texas, vs Florida