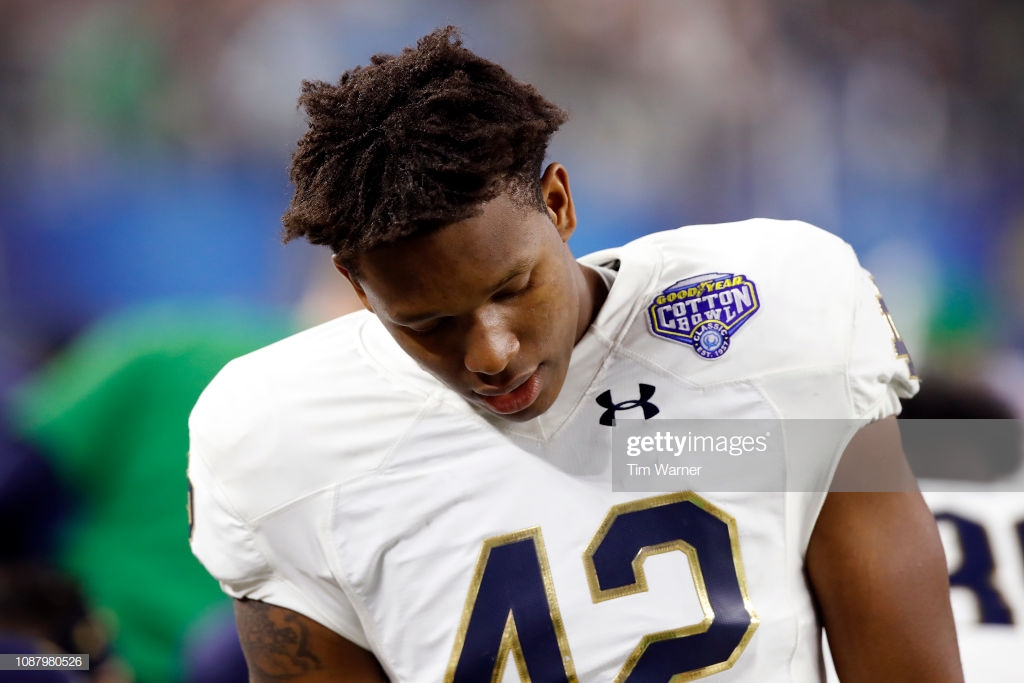 A long limbed and lanky edge with a frame that it capable of adding more muscle. He played on the weak side of Notre Dame’s defense primarily in a two point stance as the 5 or 6 techniques. With a brother in the NFL he has good genes and has someone close to him who can get him ready for what to expect at the next level.

Against the pass, he is capable of having good burst at the snap and eats ups space quickly rushing outside. He has good flexibility and bend to get around the tackle and flatten out to the quarterback. He uses slap and swipe on outside rushes to keep the OT off of him.  He has good initial hand placement and uses good leverage on straight bull or speed to bull rushes to get a good push in the backfield. He also has used at rip, long arm, club and spin when attacking the blocker though in limited reps. He has some experience in coverage with spot dropping and handling RB swings outside.

At Pittsburgh, from the left edge he gets a good start at the snap, gets up field quickly and uses a swipe to get around the edge and despite dropping to a knee has the length to disrupt the pass.

Vs Virginia, here is another speed rush around the edge beating the RT easily and swiping at the ball to force the fumble. I’m not sure what he’s doing with his left hand.

Vs Virginia, he uses the speed to bull vs the LT and drives him back to the QB.

His burst at the snap varies and is often late or the ball.  He often stands farther back from the line of scrimmage than you expect and will readjust his feet throwing off his timing and balance. His pass rush plan needs work when it comes to variation. He’ll go long stretches only using speed outside or bull rushes and needs to mix it up to keep the blockers guessing. He needs to improve countering to get off blocks when his initial move didn’t work. Dropping into coverage he runs to his spot with his back to the ball and was very limited in what he was asked to do.

Vs Virginia, he’ll drop into coverage in the flat, turns his back to the QB and the ball goes by his ear to the receiver.

Against the run, he shows good hand placement and effort taking on blocks. He pursues the ball well and can cover ground quickly and has good length to get his hands on runners.

At Georgia, this play has positives and negatives.  He has good hand placement and good position and is able to shed the LT.  He gave up about 3 yards before he was able to shed and then slipped off he RB.

He really needs a lot of work defending the run. He is marginal diagnosing run vs pass and doesn’t read the mesh well. He freelances way too much.  He rarely sets the edge and prefers to try and duck inside of blockers and pullers taking him out of the play. He struggle trying to shed blocks from OL and TE’s. He doesn’t have the play strength to anchor on runs his way. His angles to the ball carrier are poor leaving him to slip off tackles leading to very low numbers.

At Georgia, he’s lined up at the 6 tech and will be one on one with the TE and gets driven back 4 yards and can’t get off the block.

Vs Virginia Tech, he’s on the right side and the offense will pull the RG his way. He jumps way inside to try and avoid the guard and takes himself out of the play.

Okwara has good athleticism, length and motor. He has potential to be an above average pass rusher with his ability to pressure with speed on the outside and with power rushes if he can become more consistent.  In my opinion he needs a lot of work and I am not as high on him as the masses so he’ll likely go earlier than I would take him.

Areas of improvement include his burst consistency of the ball, his pass rush plan, coverage ability, tackling angles, taking on blocks and being able to shed.  Whoever drafts him will have to be patient. He will likely be sub package pass rusher early and get work on special teams until he improves all the other areas.