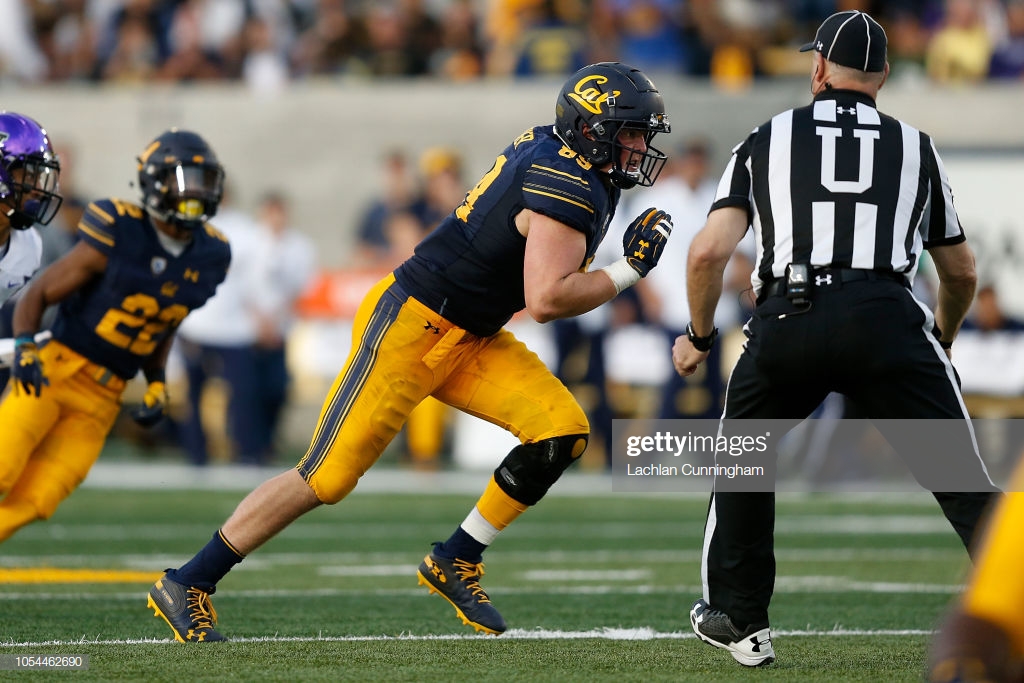 Evan Weaver stamped his name all over the Pac-12 and Cal record books during his time as a Golden Bear. No player in Pac-12 or Cal history has ever registered more tackles than the 181 tackles that Weaver recorded last season. Simply put, the Cal linebacker was a tackling machine on the field. He was the only Pac-12 player since 2000 to have 20+ tackles in multiple games and also logged a 12-game streak with double digit tackles. Weaver just has a nose for the football and this should attract the eyes of many teams come this year’s NFL Draft.

The Cal linebacker mentioned at the Senior Bowl that he spends at least three to four hours a day watching film and it is evident on his film that he is a highly intelligent player. Read, diagnose and attack – that is the timeline that Weaver goes through on every play and he is exceptionally good at doing so. He reads plays easily and can diagnose them in no time. Because of his high football IQ, this always leave him in the position to attack. Watch on the play above as he reads the tight end going across the formation, revealing the run direction, he then easily works his way through a block to make the tackle for a modest gain.

Another example of Weaver’s high football IQ shining through on his tape on the play above. He reads this option perfectly and does not bite on the running back handoff. Instead he stays true and zeroes in on the quarterback and is right there in the backfield to make the tackle for a loss. Watching Weaver play the run, you get the sense that he might be a robot controlled by artificial intelligence as he is very rarely fooled and consistently makes the correct decision in attacking the football.

Intelligence, while it is the most important hurdle for linebackers to climb, it is only one piece of the puzzle. Physical ability is also very important but Weaver also excels in that regard as well. He is strong and very physical which gives him the ability to swift through the trash around the trenches very easily. Weaver effectively sheds blocks and can navigate through the trenches to get to where he needs to be. Tough to find a blocker on film that stopped Weaver from getting to where he needed to be.

While Weaver may not have sideline to sideline range or the athleticism to cover the entire second level, he does have a great amount of short area quickness. He bursts into the backfield very quickly and blows up more than his fair share of plays. Watch on the play above as he bursts into the backfield, blows right by a blocker and makes the tackle for a loss. His intelligence combined with his short area quickness makes him the great run defender that he is.

Again, no player accidentally stumbles onto 181 total tackles unless they give it their all on every single play and Weaver brings this to the table. He has an incredible amount of hustle and a very long-lasting motor as he is never out of a play. On the play above, he works his way to the sideline in order to make a tackle. This play looks like it is far out of his reach from the beginning but he has an internal compass to the football and will always find his way to the ball.

Now, most of the talk when it comes to Weaver is just how high his ceiling is at the next level. He does have some limitations that may limit his potential at the next level, primarily focused on how he will hold up in coverage. The Cal linebacker is not the smoothest athlete, especially laterally and this could be a huge problem for him in coverage. While he is great at going downhill, his sideline to sideline ability is a lot more questionable.

When it comes to Weaver’s projections, there are some notions that are set in stone and also a few questions. What seems to be set in stone is that he is a great run first linebacker. He brings a high level of football intelligence as he diagnoses and attacks plays not only aggressively but also with a lot of precision. The big question mark is if he can be a three-down linebacker in the NFL, where the game is a lot faster and quicker. Whether he can remains to be seen but what is sure is that the team that selects him will be getting a great two down run defender and with his high motor, he should also be a special teams’ ace.