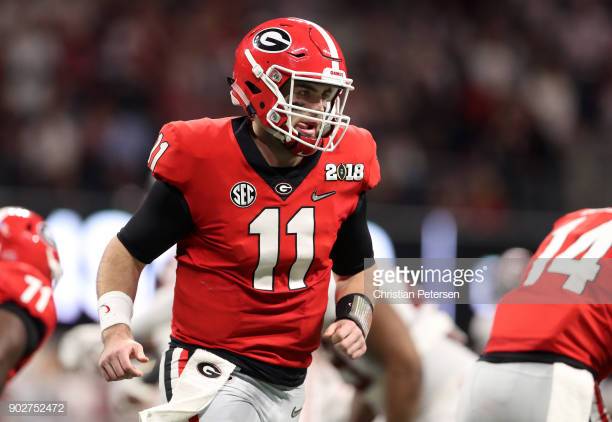 The term ‘game manager’ is thrown around as a pejorative term when referencing any quarterback that is considered risk averse, or that doesn’t fit the prototypical ‘franchise quarterback’ mold. While there are parts to Georgia junior quarterback Jake Fromm’s game that lean that way, he is more than just a game manager.

To that end, Fromm is willing to be selectively aggressive with the football when the defensive scheme or matchup dictates it.

These are encouraging signs for a quarterback that mainly operates within the framework of the system. When Fromm can throw in rhythm, he is deadly accurate and decisive with the football.

Decisiveness is probably the hallmark of Fromm’s game. The Georgia native does not hold on to the ball for extended periods of time and is not afraid to check the ball down to a back or tight end. He’s a defensive-minded head coach’s dream because Fromm is generally risk averse and does not typically put the ball in harm’s way. He’s also a fairly accurate passer who shows the ability to consistently lead his receivers into yards after the catch and shows good touch to drop a ball in deep down the field.

The issues with Fromm come somewhat from his conservative nature. He does not show next-level quarterback traits such as looking off safeties or pulling defenders out of zone coverage with is eyes to create space. He also does not show a great ability to push the ball into zone coverage, especially over the middle of the field. His post-snap recognition against more complex defensive coverages leaves something to be desired as well. These skills require a certain amount of calculated risk instead of simply throwing a receiver open who is in tight man coverage.

This issue is compounded by the fact that Fromm is nothing special outside of structure. He’s not slow by any means, but does not have the speed or dynamic running ability of some of the more recent quarterback prospects who have tilted the NFL landscape in recent years.

The 4th all-time leading passer in Georgia history does not have poor arm strength, but its average by NFL standards. While his accuracy is not generally affected by his non-traditional lower body mechanics, his arm strength absolutely is.

Fromm has a habit of not stepping into his throws and lifting his back heel before delivery. This saps arm strength and velocity.

Compare that to when he sets up and fires the ball.

This is not black-and-white however. Fromm can still make big time throws off his back foot under pressure.

At this point in his career, Fromm is likely set in his fundamentals and trying to change them significantly would do little. After three years of college starting experience he is what he is. That doesn’t mean he’s bad though. A team who is committed to building a quick-passing offense with a solid offensive line can absolutely have success with a player like Fromm.

Just don’t bank on him turning into a franchise defining quarterback who can single-handedly lead a team to the Super Bowl. Fromm has the profile of a player who be in the top 15 at his position, but rarely in the top 10.

Projected Round: 2nd Round