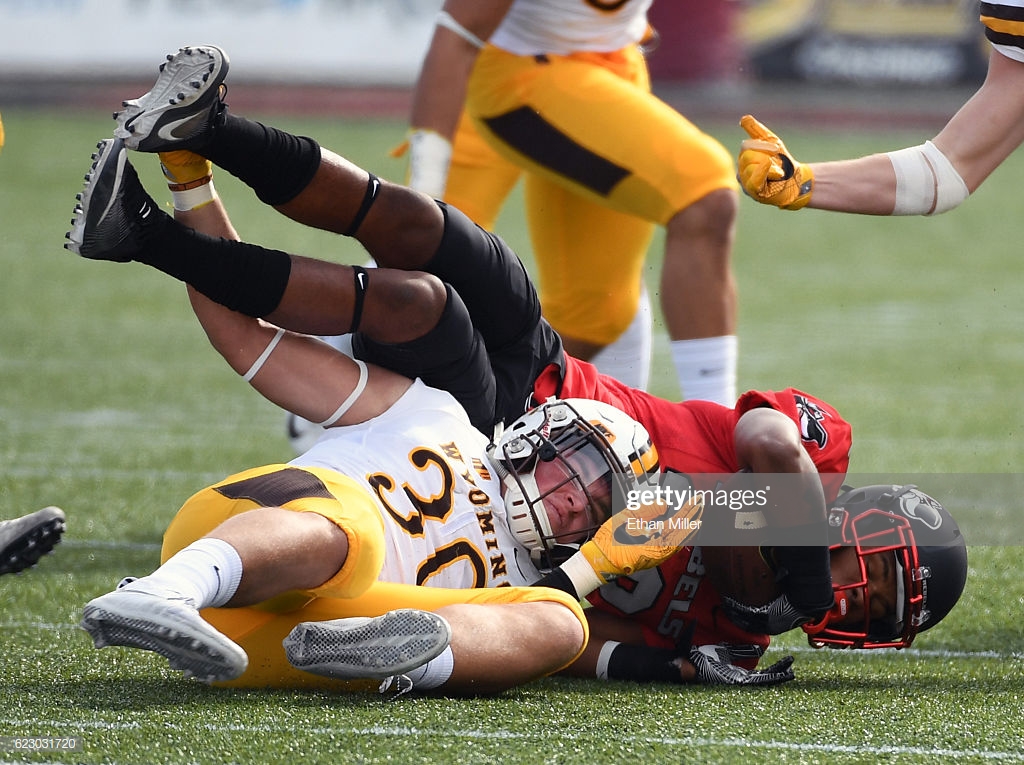 A highly productive linebacker and leader coming out of the Mountain West who started every game he played in college. Logan Wilson has the look of your prototypical inside backer and played the MIKE in Wyoming’s defense. He plays with a no nonsense attitude, takes his job seriously and executes his duties well.

In the passing game, he played a lot of Zone and looks comfortable in space. In the middle of the field or lined up in the apex between the tackle and the slot he show good awareness of routes coming through his zone and looks to get a push on those in reach.  He keeps his head on the swivel and slides with the eyes of the quarterback.  He shows good acceleration to the ball on underneath routes and played a little bit of Tampa 2 coverages as well getting deep down the middle of the field. In Man Coverage he was uses on RB’s and TE in the short area and looks to have the athleticism to handle that consistently. He displays good ball awareness and solid hands when he gets a chance bringing down 10 interceptions in his career.

At San Diego State, he’ll dispose of the FB with a good punch and get a hit on the QB.

At Boise State, the QB is going to roll out and Wilson will get the sack with good acceleration.

At Boise State, on a 3rd and 12 late in the 4th, he’ll drop in Zone coverage, eyes on the QB and makes a nice adjustment and catch for the interception.

He always flows to the ball even to plays not in his area. He has good athleticism allowing him to spy on most QB’s and can accelerate well on scramble to cut of the area to run. He reads screens well and has the quickness and mental processing to beat the blocker to the spot and get to the ball. He was use to mug the A gap to blitz from time to time (even a loop around the edge once) and with a clear lane can create pressure quickly.

Vs Missouri, he reads the play quickly gets over the double rub routes and takes a good angle to the outside to make a play if the ball was caught.

Against the run, he is very good at diagnosing and reading his keys and takes good angles to the ball.  He displays good speed and lateral agility to work through traffic and accelerate downhill to fill the hole to meet the runner and plays sideline to sideline. He is solid taking on blocks off the ball uses his hands to keep blockers off him and shows a heavy handed punch and yank to remove blockers from his path. He tackles very well driving through runner and wrapping up ball carriers.

At Hawaii, near the goal line he’ll read the play scrape to his left to fill the hole and then run through the RB for the tackle for a loss.

At San Diego State, he will flow with the play delivers a two handed punch that puts the FB on his back and shows his motor to get in on the tackle.

He is aggressive to the ball and attacks without breaking down causing some slips off of tackles. His Man coverage reps were limited so coverage on the intermediate level or up the seam is undetermined. When blitzing he didn’t create pressure by going through offensive lineman. Aggressiveness to the outside will lead to him overrunning the ball on occasion.

At San Diego State, on 4th down he comes downhill aggressively and the RB is able to sidestep him to the inside.

Wilson is smart and makes plays. He has a good motor, diagnoses well, is a very good tackler and plays sideline to sideline. He works well in Zone coverage and can play Man coverage in on short area passes and has the potential to be a good blitzer. He reads his keys well and takes good angles but does he have enough speed?  Can he play in Man coverage over bigger areas? A think he has the mental processing to handle anything you throw at him. Similar LB’s of his size are right around the 4.70 range, so if he can run that or better his stock may go up a little. Good player overall, will be a monster on special teams and could has a chance at a starting role in the future.