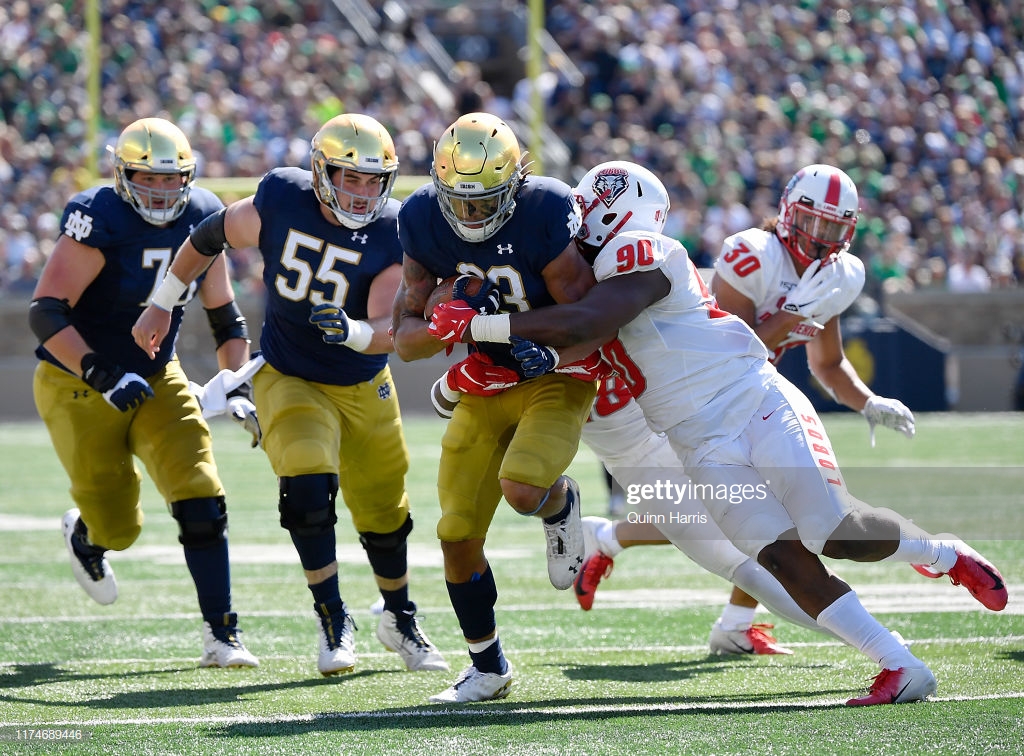 -Big-bodied wide receiver that knows how to win with body positioning; physically dominant
-Dominates on 50/50 balls; just too strong for defenders and jumps above defenders
-Massive catch radius; high-points football with ease and has big, strong hands to rip football out of the air
-Does a great job of consistently working back to football, providing QB with big target
-Nasty, mean run blocker that looks to bury and embarrass opponent
-Key special teams player at Notre Dame; will play immediately in pros

-Limited production overall; some of that can be put on offensive structure and scheme
-Doesn’t create a ton of separation in routes, if any
-Didn’t show a diverse, developed route tree at Notre Dame; lots of vertical routes (9s, posts) and quick crossing routes (drags)
-Struggles to stack vertically, but makes up for it with physicality in the air
-Not a YAC guy; needs build-up speed to win in space
-Not overly dynamic and explosive in and out of breaks; needs to develop a plan to win on releases

-Playing four years at Notre Dame, seeing action in all 50 games, starting 33 of them
-Finished four-year career with 150 receptions for 2,159 yards and 19 touchdowns
-Put up 66 catches for 1,037 yards and 13 touchdowns in senior season
-Named Camping Bowl MVP in win over Iowa State
-Sits seventh all-time at Notre Dame in receptions with 150
-Canadian-born player that is one of highest-rated recruits ever to come out of Canada
-Competed in 2020 Senior Bowl in Mobile, Alabama
-Invited to 2020 NFL Scouting Combine

Much like former teammate and current Baltimore Ravens wide receiver Miles Boykin, Notre Dame product Chase Claypool, is a big, physical specimen at wide receiver that is dominant on 50/50 balls.

For teams that prefer size and strength at the X or the Z to speed and shiftiness, Claypool is that guy in this draft class.

I mean, just look at the catch radius. I love that he sells out for this football, and you can see his length on full display here. That’s a tough guy to handle in any situation.

While he gets his name talked about as a vertical threat that is electrifying in the air, Claypool is terrific when it comes to overall body control. He wins through contact, adjusts well on throws, and has some serious power to his game overall.

Claypool’s game against Georgia in 2019 was quiet for the most part – that was, until he flat-out took over late and nearly carried Notre Dame to an upset road win.

This back-shoulder pitch-and-catch with Ian Book started it all for Claypool. This was the first time I really saw him get vertical in a hurry. Not only does he flash some serious core strength to get his head and shoulders around on this ball, he shows great lower body control to get one foot in bounds while a defender is draped all over him.

On the very next play, Notre Dame went right back to Claypool. He gets off with a bit of a push-off here, but it shows the strength Claypool has to shrug the defender off and make a play inside the front pylon for the touchdown.

For a guy as big and as powerful as Claypool, his body control – I can’t state this enough – is incredible. He adjusts so well on routes and has the catch radius to snag passes well away from his body.

This is a terribly-thrown ball from Book on a slant route for Claypool, but the receiver bails him out with his long limbs reaching back behind him while spinning around in traffic to snag this football. Most guys would give up on a ball thrown this poorly, but Claypool adjusts so well, so quickly. He makes it look easy.

While he’s good playing through contact, winning in the air and adjusting mid-route, he’s not a dynamic guy with the football in his hands after the catch. He needs a runway to build up speed and get moving in space to chew up yardage.

He sure looks great moving in space with his long strides eating up yards in huge chunks, but he’s not going to make defenders miss one-on-one, and certainly won’t break many tackles. That’s okay though; he can be a darn good possession guy.

Final thoughts on Claypool – I’d play him quickly in an X or Z role and ask him to be some combination of a deep ball threat and a possession guy. He has the traits to dominate in both areas, but isn’t going to be a burner like some teams want at the X or Z.

One great thing with Claypool is that even if it may take some time to see a return on the investment at receiver, he’ll impact games on special teams right away. He’s an excellent coverage guy on punts and kicks, and can make plays in those situations as well, recovering a couple of fumbles in his career.