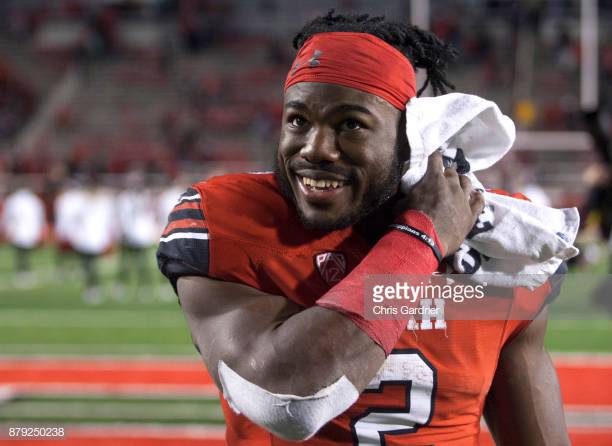 -Surprisingly dynamic, quick feet for a bigger back
-Good contact balance for the position to bounce off of hits and stay upright, searching for additional yardage
-Consistently falls forward, adding yardage to runs while wearing down defenders
-Vision is a strong suite in his game; does well to anticipate and find lanes
-Very good burst into space straight ahead and runs heavy behind his pads
-Strong, decisive runner with limited wasted movement in the backfield
-Thick, powerful lower half that lets him run through contact in tight

-Has the want-to and the form to thrive in pass protection, but needs to unlock punch power and overall strength to hold up consistently
-Has a tendency to try and bounce runs to the outside early on, but doesn’t have the overall speed to win horizontally
-Won’t make a defender miss in space with elusiveness; tight hips that limit athleticism
-Can’t create big plays from nothing; needs a launching pad to rip off the big play
-Struggled with focus drops as a receiver
-Lots of wear and tear on his treads

Coming into the 2019 season, I personally had Utah running back Zack Moss as my RB1 in the 2020 NFL Draft class. I was sky-high on the dynamic running back. Really, his performance in 2019 did nothing to change my grade.

Finally though, I got a chance to really dive into his tape from an evaluation standpoint. I am still super high on Moss’s tape, but I’ve slightly backed off on RB1 in this loaded draft class.

With Moss, he’s a complete package at the position, a package you won’t find in many guys in this class – if any – at the running back position.

He’s a tough, physical runner that will hit the occasional home run, has soft hands out of the backfield, and is serviceable in pass protection. The only real, obvious concern anyone should have with his game is the amount of wear and tear on his body. Through four years at Utah, Moss carried the rock 712 times, including an astounding 235 times his senior year.

The one thing I’m a big fan of with Moss’s game is his vision and anticipatory skillset in the backfield. He sees lanes before they develop and has great spatial awareness to know what’s happening around him.

Take this run against Oregon last season as an example. It’s designed to be a run to the right, but it’s bottled up quickly. Moss is patient and searches for a lane, all while moving forward. Then, he spots a small crease to his left and rips off a huge chunk play. These types of runs aren’t a consistent part of his game, but he’s shown the ability to occasionally create for himself.

For a back as heavy as Moss is, his contact balance is insane.

No back should really be able to bounce off of a hit like this that’s low and at the knees. Moss shakes it off, proceeds to break another tackle on the boundary, and then dishes out some punishment at the end.

This play right here is what I’d show a general manager if I were a scout. This shows me Moss can be a dynamic back in the right system. Give me a guy who runs well behind his pads and has contact balance like this.

When I say great straight-line burst with Moss, this is what I’m talking about.

No, he’s not going to outrun guys to the sideline, but in a straight line like this he runs like he’s shot out of a cannon. There’s no hesitation or buildup getting up to top speed, and he’s just chewing up ground in the middle of the defense.

Check out the strength at the end of the run too to shrug off the high arm tackle.

Moss has some terrific feet for a back his size. They’re surprisingly dynamic.

What a jump cut this is by Moss. He gets his feet even and transitions his weight to the outside quickly, allowing him to jump out of a closing hole into daylight.  Ten yards and a first down. Money.

Throughout his film, Moss’s hips appeared tight, but late in the year he really flashed some insane elusiveness, pairing it with his dynamic feet to make him a tough tackle.

His tape is just fun. He’s not the flashiest and certainly not the most athletic back in the class, but he’s consistent, dependable, and by all accounts a great teammate and a great building block within the room.

I’m not in the camp of drafting a running back with a pick in the top 40 for any franchise, but if Moss were to go in the top 40, namely early in the second round, it wouldn’t be a pick I’d be mad at.

While I have concerns about his long-term viability due to his wear and tear in college, he’s a high-ceiling back that can play all three downs and give an offense some really good years on a rookie deal.