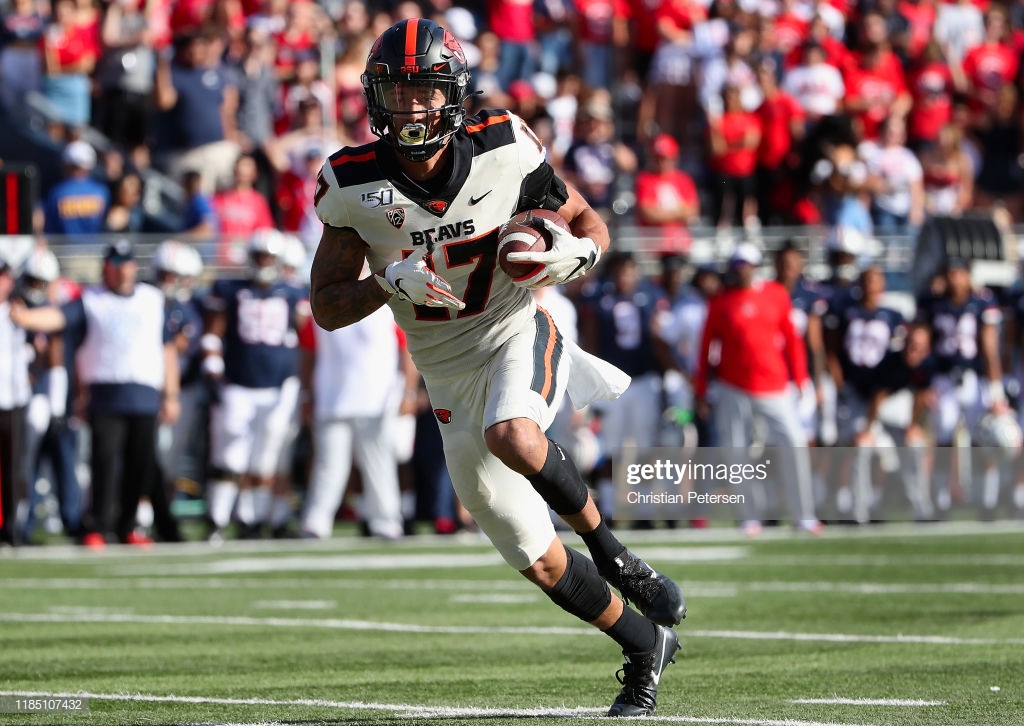 Isaiah Hodgins saw a steady improvement in is production year over year and enters the draft after his junior season. He doesn’t turn 22 until October and he is yet another player in this year’s draft with NFL connections. He lined up inside and outside and primarily as the X receiver. He has very good size and length and had me starting to believe that the end zone fade route could be a useful play.

As a receiver, he shows solid acceleration off the line of scrimmage against Off Man and Zone, varies his speed to keep the DB guessing and is a good route runner with a solid ability to drop his hips. He was used over the entire route tree but did the majority of his route running in the short and intermediate routes and is solid finding the soft spot in the Zone and is good working open for his QB in the scramble drill.  He is very good at separating by manipulating the DB using his body to get the defender to open up early or overcommit in one direction.  His hands are good when he uses them but over 60% of the receptions I watched were body catches though drops were not a problem. He has very good body control and catch radius and can adjust all around his frame and make the tough sideline/end zone reception and can win on deeper routes with very good double moves. He was very good in the red zone getting open and using his size to go up over defenders. He can make the catch in traffic, the contested catch and take a hit while holding on.

At Colorado, from the top of the screen he uses hesitation and a break to the outside on the fade route and makes an outstretched, one-handed catch for the TD.

Vs Oklahoma State, from the slot at the bottom of the screen he wonderfully sells the slant route turning his head and body to the inside getting the DB to commit before breaking to the outside.

Vs Oklahoma State, at the top of the screen running a Dig route he shows off his catch radius reaching out in front to bring in the pass.

At UCLA, at the top of screen he’ll run a go route. Can’t get over the top but shows very good body control to adjust to the ball and get his feet inbounds.

At UCLA, at the bottom of the screen another great example of route running on the out and up completely turning his body and head to the outside getting the DB to bite.

He didn’t perform well against Press coverage with the Jam. Physical DB’s were able to redirect him and keep him from getting into his routes. He takes some time getting through his route to the break and doesn’t separate with speed or by being physical at the top of his route.  He didn’t create a lot after the catch and doesn’t have the burst to run away from defenders or get over the top.

At UCLA, this was about the best I saw creating after the catch. He’ll take the hitch and make the first guy miss and gets some yardage but there were few creations like this.

Vs Utah, he is in the slot to the top and will run a go route up the sideline and just doesn’t have the speed to beat the DB who frankly doesn’t even look stressed on this play. This was the result on pretty much all of his straight go routes.

As a blocker, he is a willing participant by either selling his route to take the DB out of the play or as a blocker.  He puts himself in good positions and uses a wide base and his length to mirror defenders. He was often seen blocking downfield on extended plays.  He also uses his body well as the rub receiver to open up passing areas for teammates.

Hodgins has a lot of very strong qualities including being able to manipulate DB’s, his catch radius, ability to adjust and being a red zone winner. A lot of his receptions came on Slant, Hitch and Dig routes and he can win on double moves and fades in the red zone. He’s going to have to improve against physical DB’s and Press coverage to beat jams or else defenses will press him all the time. He doesn’t have the long speed to be a deep threat and doesn’t create a lot after the catch. He’ll be able to contribute on the short and intermediate routes out wide or in the slot, occasionally win with a double move and be a red zone target.