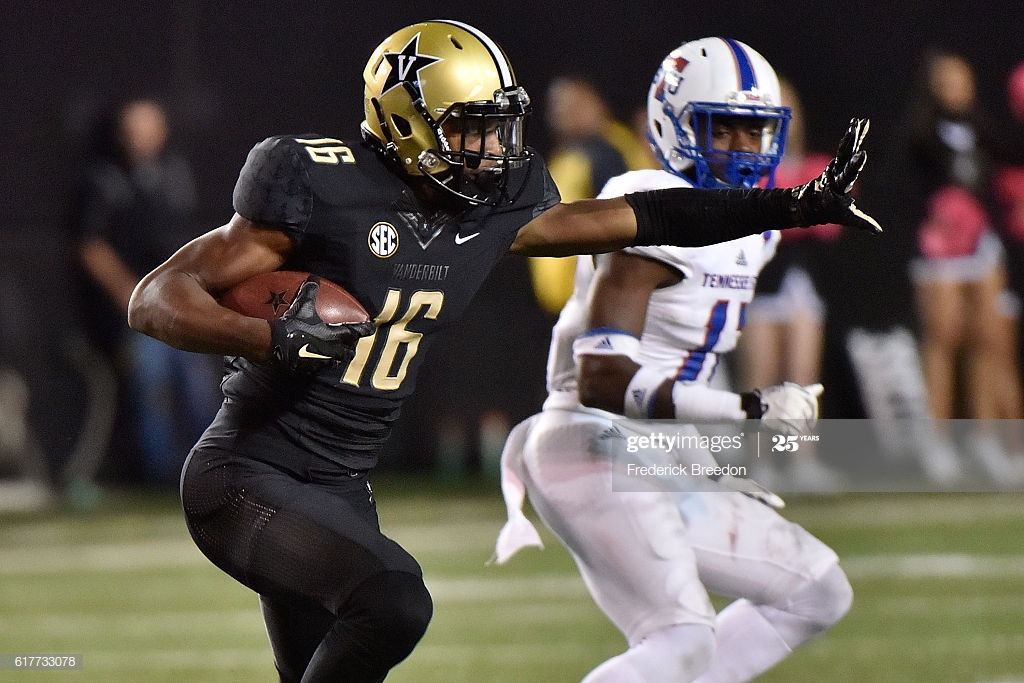 A SEC receiver with a productive career who improved his numbers each year before a drop his senior season while playing with a new QB and porous offensive line. He lined up in the slot and outside for the offense with the majority of his work coming as the X.

As a receiver, playing against Press coverage he shows good quickness and footwork with solid use on hands against the jam and shows good acceleration off the line of scrimmage.  Against Off Man and Zone coverage he has good acceleration to run up the toes of the defender and will vary his release timing to keep DB’s guessing.  Good route runner taking good angles when getting up field to manipulate the DB and get him to turn his hips and good body control to avoid defenders in the route. To create separation he will use quickness out of the break and subtle physicality to create space and gets his head around quickly to the QB. He has a good hip drop to decelerate and get turned around quickly on curls and comeback routes.  He has very good mental processing to work in Zone and sit down in open areas and give the QB a good target and also works hard in the scramble drill to help the QB.

At Notre Dame, he’s at the bottom of the screen. He’ll hesitate and jab outside to get the DB to slightly drop his outside foot before accelerating inside and using physicality at the break to create enough space.

At Missouri, he uses quickness to make the DB miss with his hands. He drops his hips at the top of the route, gets his head around and makes some yards after the catch.

Vs LSU, he is lined up in the slot and runs a really nice route.  He will press to the inside to get the DB to turn his hips. Then he straightens before breaking quickly to the outside and adjusting to the ball thrown behind him before making one miss.

He shows good hands with the ability to adjust all around his frame, shows good concentration in contested catch situations and good sideline awareness. He displays solid yards after the catch with stop/start quickness to make defenders miss. He did the majority of his successful work on routes within the short and intermediate levels and is a reliable chain mover on third down.

At Missouri, he’s at the top of the screen and will run a fade. He uses his hands to create space before going up to make a nice grab and get his foot down

At Missouri, he’s at the top of the screen and will run a comeback route.  He shows good concentration to make the catch despite the defensive pass interference.

Vs LSU, he’s wide right and will run a slant. He corrals the catch, runs through one tackle and shows good agility to make one miss on the way to the end zone.

In the run game he knew his blocking assignment, worked to get himself in position to block with a good base and hands inside and was solid blocking outside on similar sized players. He was also used on jet sweeps and reverses and used his blockers solidly to get his yardage.

He picks up his back foot before releasing from the LOS. Coming out of his break he slows down allowing DB’s to make up ground truncating the initial separation he created.  He needs to keep his speed out of breaks and improve his play strength on 50/50 balls. He would benefit from working back to the ball on curls and come back routes. Doesn’t have the speed to overtake DB’s on deep routes or run away from defenders after the catch. Didn’t display a strong willingness to block on the edge or near the LOS against bigger defenders.

Lipscomb is a good route runner who can play inside or outside and will be able to get open on the short and intermediate level while being effective doing the little things on third down to keep the chains moving.  He’s not going to win on deep routes and needs to keep his speed coming out of the break. He was open more than his numbers indicate and with a quality QB he could be an important asset. I think he would fit best as a slot at the next level that could back up the X and Z positions.