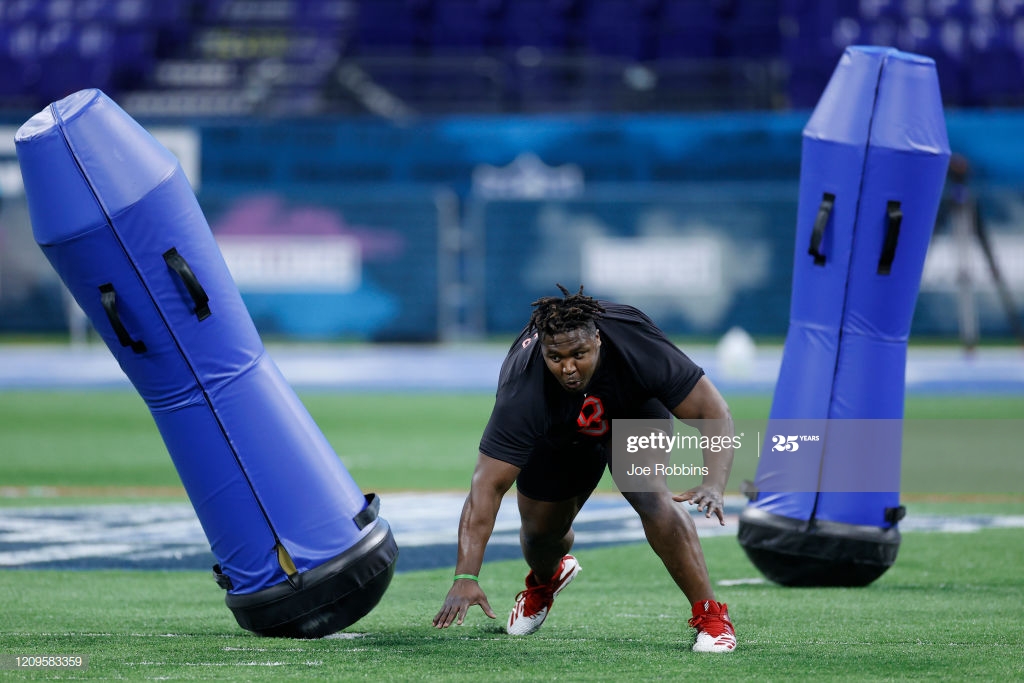 Offenses were seeing double when playing against Nebraska. The Davis twins, Khalil and Carlos were mainstays on the defensive line for the Cornhuskers. Khalil Davis put up some encouraging numbers among the DL group at the Combine including tying for second with 32 bench press reps and finishing 4th with a 1.66 10 yard split. He lined up inside and outside for the defense.

As a pass rusher, when rushing from the inside he shows solid quickness at the snap and the ability to get skinny to split gaps and get into the backfield.  He has solid lateral agility and he’ll use a club swim and rip with success. He has a good motor and works to break through and once through the line he has good acceleration to get to the QB.

At Colorado he’s rushing from the left from the left side and will get pushed out bush shows his motor to chase the receiver down field.

Vs Ohio State, he’s the 3 Tech on the left and will rip under the RG to the outside and has a line to the QB before being pushed from behind.

At Maryland, he’s lined up over the left guard and will show his burst into the A gap to get pressure.

Against the run, wherever his aligned he displays good mental processing to identify run and good lateral agility to move with the blockers and beat reach blocks. Has solid hand placement in one on one blocks and a solid ability to control his man.  His motor is evident chasing the ball all over the field and is an aggressive tackler.

Vs Purdue, lined up as the 3 tech on left he beats the OT to the inside and chases down the runner from the backside.

Vs Ohio State he’s across from the right tackle and will shove him to the inside and shows agility to dive to his left and make the tackle.

Vs Wisconsin, he’s the 1 Tech on the left and is a little slow at the snap but gets laterally quick and dips under the RG and beats the reach block.

When rushing from the outside (5T or wider) he doesn’t have the quickness to beat tackles to the edge. His has adequate arm length coming in at 31.5 inches and his use of hands must improve to keep lineman off of him as he will often lead with his shoulder.  His pass rush plan is limited, rarely gets the offensive lineman off balance and didn’t show the ability to rush with power.

When playing in two gap schemes he is adequate at timing the snap as well and adequate play strength making him vulnerable to down, combo and double blocks unable to hold his ground. He doesn’t get a push to reset the line of scrimmage. He needs to quicken his ability to disengage from blocks.

Vs Wisconsin, he’s the 1 Tech on the right, pops up out of his stance, gets driven back about 7 yards and misses a chance at a tackle.

Davis has good agility and mental processing to identify blocking schemes, has shown the ability to be quick at the snap and penetrate gaps in the offensive line and the lateral agility to slide with blockers.  He has a high motor and gets after the ball in pursuit. He is slower at the snap playing in a two gap defense, doesn’t anchor well vs drive blocks and is slow to shed blockers at the point of attack.

His best fit would be as a rotational backup interior defensive lineman in a 1 Gap scheme to allow him to shoot gaps, disrupt lanes and get after the ball. He should be able to get pressure in a one gap but any struggles would lead to an early down roll.