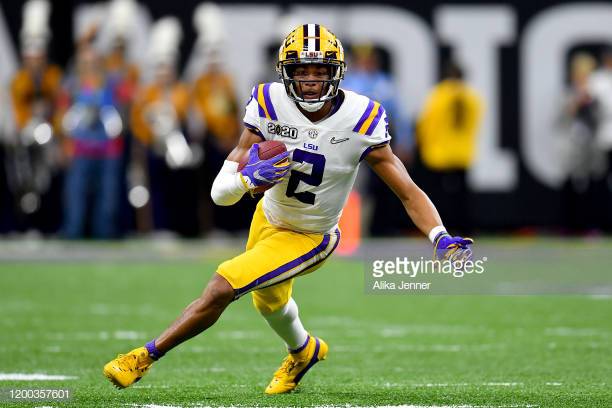 Quarterback Joe Burrow wasn’t the only player that was helped by the scheme change for the LSU Tigers in 2019. Receiver Justin Jefferson moved from the boundary to the slot in the Tiger’s new NFL-style scheme this past season and exploded for 1,540 yards and 18 touchdowns. Jefferson brings the size and body control of a boundary receiver to the slot in the NFL, which translates well as a possession receiver. His wheelhouse in 2019 was making catches in the short and intermediate areas of the field.

Jefferson has a strong pair of hands and a big catch radius to the slot as well. His body control and spatial awareness make him a great contested catch receiver as well as a target over the middle.

There is a certain amount of positional flexibility for Jefferson as well, given his size, timed speed and experience playing on the boundary early in his career.

The one sticking point for the St. Rose, LA native is that he does not consistently show explosive, downfield speed on tape. There are moments where he flashes the ability to get by defenders but they are infrequent. His 40 yard dash time at the combine of 4.43 alleviates some of these worries, but the tape shows a player that just doesn’t have enough juice to be a WR1 in the NFL.

Jefferson’s numbers were also inflated by the Tigers’ scheme in 2019. A good bit of his production came on rub routes and mismatches more than being able to beat defensive backs in man coverage. The other concerning aspect of Jefferson’s game is that he does not break a lot of tackles and doesn’t seem to have a strong lower body, which also plays into why he does not have the downfield explosive speed you’d like to see from a top end wide receiver. The best mismatch weapons in the slot have the ability to break tackles and get yards after contact. Jefferson is elusive, but not a tackle breaker.

*The first play on this set of film is a touchdown, but the coverage defender is sophomore safety Caden Sterns. By playing in the slot, Jefferson gets favorable matchups such as this rather than facing cornerbacks on a regular basis.

Once again, there’s nothing wrong with taking advantage of the plays that are called for you, but it’s important to put his production in context. The good news for Jefferson is that he showed the ability to produce in several key areas and will likely be a productive receiver at the next level as long as he’s not relied on as the top target in an offense. His play style compares favorably to Rams receiver Robert Woods or former Bills and 49ers receiver Stevie Johnson. Both of those players have been very productive, but ultimately were not the type of player that you can build an offense around.

In a crowded receiver class full of fantastic physical prospects that have both size and speed, Jefferson may slip into a latter round and benefit from being put into a good situation on a good team. If he’s used properly he could be a matchup nightmare in the slot for teams that do not have a strong nickel option.