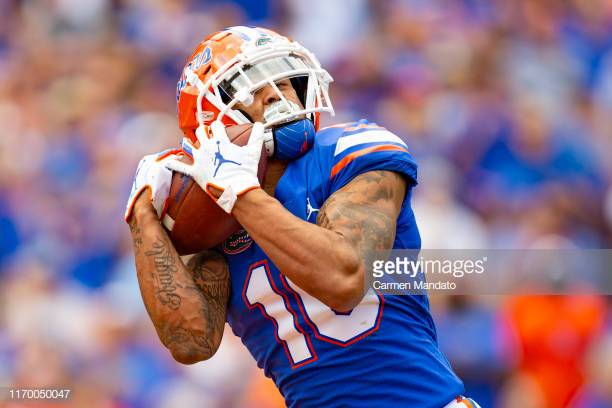 -Savvy route runner that changes up pace in routes to throw defenders off balance
-Slot monster that is quick in and out of breaks to create ample separation
-Diverse route tree and is fluent in each route
-Fights his butt off as a blocker and has solid technique
-Flashes late, soft hands to pluck the football
-Footwork is above average for the position; key to separating on his routes
-Possesses kick and punt return experience, which will help him work his way onto a roster

-Diminutive frame with very little room to add bulk
-Play strength is a concern; unsure if he’ll be able to hold up in slot as a blocker on bigger defenders
-Won’t run through many tackles as a YAC guy; has to win in open field
-Only one year of real production at Florida
-Doesn’t possess ideal long speed for body type and position

In a day and age in professional football in which wide receivers are expected to be either burners or contested catch guys, seeing a technical, nuanced route runner here and there is refreshing.

At just 6 feet tall and a few pounds shy of 200, Swain is a diminutive slot weapon that always finds himself open, regardless of the matchup.

Despite not getting much playing time until his senior season, Swain is pretty darn developed for the position, knowing how to get in and out of cuts quickly to create separation, using head fakes in a timely manner to throw defenders off the route, and when and where to break a route off to just get open.

Against Auburn in 2019, Swain dominated in the swamp, helping the Gators overwhelm the Tigers in SEC action.

Working out of the slot, Swain cooked every matchup he had, using a variety of routes to win. Here, he is running a dig route, but watch the top of his stem; he skips and jumps into it, catching the Auburn defender flat-footed. Then watch the burst out of the plant and cut to create the needed separation to make the catch.

Earlier in the same game, Swain showed off some YAC ability with the football in his hands.

It’s pretty crazy Auburn asked an inside linebacker to carry Swain here. The Florida senior does a great job of winning inside quickly and then pulling away to create separation. After that, he gets up to top speed quickly to burst through a seam for the score.

He won’t run away from many guys despite a 4.46 40. He plays slower on film – maybe around a 4.55 or higher. He just doesn’t come off as a burner or explosive mover in space. He seems like more of a possession guy to me; reminds me quite a bit of former Steeler Eli Rogers.

While not a burner, Swain knows how to work deep and get open.

Watch the head nod to the outside here, opening up the trailing defender to the outside. That head nod allowed him to split the two defensive backs, resulting in a wide-open touchdown. He’s not blazing fast, but the little subtle nuances to his route running help him succeed at a high level.

The one great thing about Swain is his routes look the same early. He’s able to sell vertically without giving away his real intentions, causing the Auburn defensive back to flip his hips vertically, leading to an easy win inside for Swain for a good chunk of yardage.

While he is a bit undersized, Swain has a big heart and fights his tail off as a run blocker. He won’t back down from anyone, and when he gets his hands on you, you’re in for close-quarter fighting.

I love this rep against Will Ignont, a 240-pound LB for the Vols. That’s a good shock to the chest from Swain, and some good leg drive.

Final thoughts on Swain – I like him quite a bit as a route runner and a possession receiver. He can excel working over the middle, taking advantage of matchups against slower linebackers and safeties. He is so good in and out of his cuts and knows how to change up his pace in routes to rock defenders to sleep. I just have concerns about the relative lack of production and the inability to really create things after the catch.