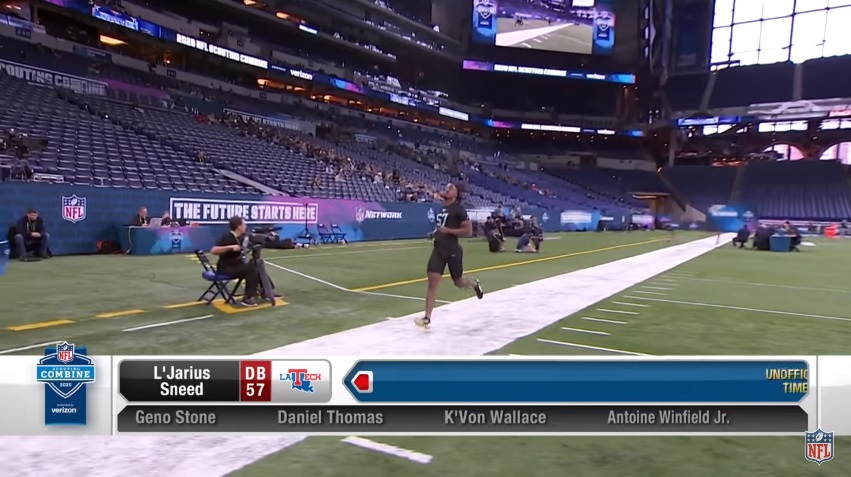 He caught my eye in NFLPA Bowl game and went to the Combine and put up impressive numbers including a 4.37 40, a 41 inch vertical and nearly 11 feet on the broad jump. He has some positional flexibility starting at safety this season after playing corner last year.

Against the pass, while playing corner he played a lot of Press coverage and some Zone while almost exclusively on the right side. He is aggressive at the line of scrimmage with his jam and has plenty of speed to turn and run with receivers. When he doesn’t jam he shows good patience to wait on the receiver to make his move before opening up. He has solid COD combatting short and intermediate routes. He has solid awareness in Zone following the QB’s eyes with solid acceleration to the ball. He attacks screens well and uses good hand placement and leverage tacking on blockers. Overall, he has good ball skills and solid productivity to break up passes when he has a chance.

Vs UAB (24), he’s the corner at the bottom playing off the WR and as he opens the WR is able to get a couple steps on him but he recovers to knock the ball away.

At the NFLPA Bowl (31), he’s the corner at the top of the screen. Playing in Zone he reads the QB and makes a good move to get around the WR and break up the pass.

As a safety, he was used in Cover 1 and Cover 2 on the deep end and often rolled up in Zone coverages. He has the speed to range while deep but I didn’t see many opportunities to show it off in the games watched. He has olid awareness of route combinations and looks better on plays in front of him.

At Texas (1), he’s the safety on the far has and will walk up with the motion to his side. He reads the play and sheds the block well but his tackling effort is lacking.

Vs the Run, while playing corner he shows good aggressiveness taking on blocks from WR and able to shed their blocks along with a willingness to get across the LOS to set the edge and force the play back inside. He isplayed good quickness to avoid OL blocks to attempt tackles.

At LSU (24), he is the corner at the top. He uses good hand placement and leverage on the WR, is able to shed and upends the QB run short of the goal line.

His hips are a little tight which can force him to reach for receivers so they don’t get too much distance from him and he’ll open too early in Press bail opening him up to routes opposite of where he opens. He is very grabby within the route and will need to remove that from his game at the next level.  He needs to learn to handle stiff arms from ball carriers. Playing as a safety he was a reluctant tackler showing much less aggressiveness than he did near the LOS. Against the run, from the safety he often hung back showing up late in the play. Overall, he’s a marginal tackler lacking pop, doesn’t wrap and slides off of ball carriers.

Vs LSU, in the slot he run with the WR on the deep cross. He grabs the receiver at the break point, has his arm wrapped around his waist and even he gets up expecting a flag.

Vs Texas, playing the safety at the top, he’ll read screen and come up quickly to try to tackle the WR and simply slips off.

His Combine numbers alone will likely get him drafted and some teams may see him as a corner and others a safety. He was two different players in the games watched and part of that could be chalked up to the position switch and possible being unsure of him as a safety. He is much more comfortable and aggressive at the LOS. He attacks well with his hands vs blockers and jamming in Press and shows good ball skills and plenty of speed to run with WR’s. As a safety he was not aggressive, didn’t participate as much in the run game and if I’m being honest seemed disinterested.

He needs to work on staying with WR’s through breaks, stopping the grabby hands while in the routes and improve his tackling ability. From what I saw, he needs to play near the line of scrimmage and I see him as a corner who could fit in the slot along with some sub package work to put him on TE’s or big WR’s where he can use his physicality at the LOS and with improvement could play on the outside eventually likely in a Zone heavy scheme.