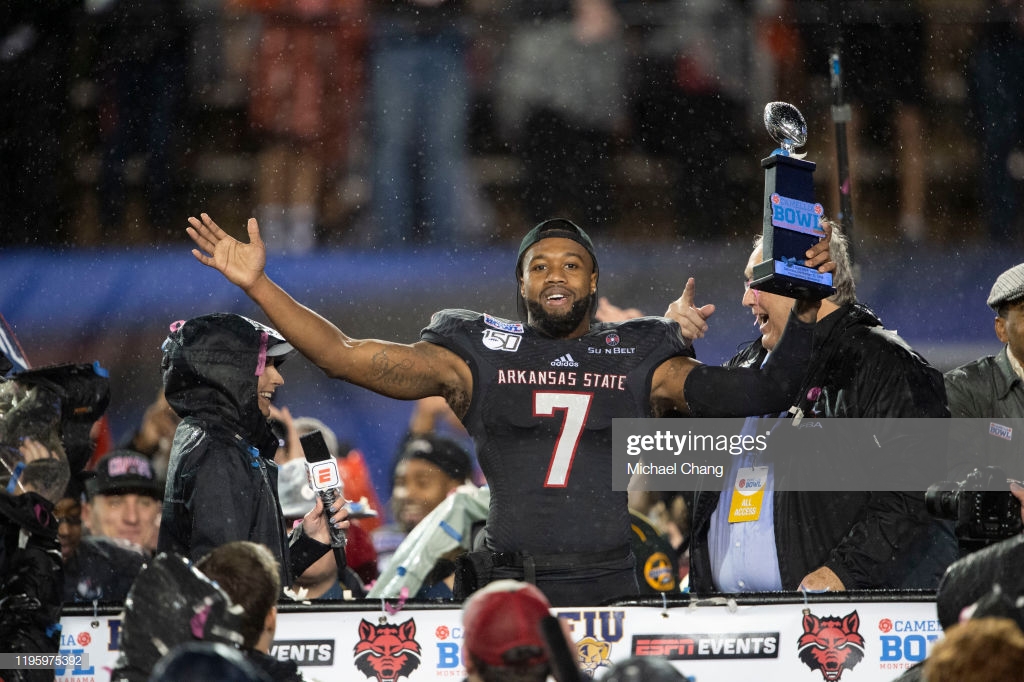 One of my favorite parts of the NFL Draft is taking a look at small school prospects who have dominated and earned national attention. Arkansas State receiver Omar Bayless is a small school kid who put up big numbers last season. With over 90 receptions, 1600 receiving yards and 17 touchdowns, Bayless cruised his way to Sun Belt Player of the Year honors. The NFL Draft is all about finding a diamond in the rough, especially as the draft rolls on and Bayless gave more than enough reasons to be in the conversation to be another small school prospect with big upside.

Bayless really came into his own last season as a vertical threat for Arkansas State. While he may not have blazing speed or athleticism, he is great at winning contested catches. He is a very physical receiver at the point of contact and as a result he comes down with many tough grabs. That was on display against SMU last season as the Arkansas State receiver was able to make this tremendous grab in the end zone as he was able to basket the football over the opposing cornerback.

The Arkansas State receiver also shows a good feel for setting up his intermediate routes as well. Watch as on the play above, Bayless sells an inside route by running inside before planting his foot and turning back out for a catch near the sideline.

The biggest knock on small school plays is always the level of competition that they frequently go up against and that is why matchup against bigger name schools should always be weighed more heavily. Arkansas State went up against Georgia last season and while Bayless had a quiet game by his standards, there were a few positives to take away from his performance. Bayless sets up this in route wonderfully, first by breaking outside and then fighting for an inside release by swiping the Georgia corner away. This gives him the separation he needs and a clear throwing lane for his quarterback.

While Bayless enjoyed softer coverage against other small school competition, Georgia played him more aggressively. There were a lot of more corners waiting for Bayless at the line of scrimmage and thus it would be interesting to see how he handled that. For the most part, he did a solid job at finding a way to beat the opposing corner off the line of scrimmage. There are two snaps included above and on both occasions, the Arkansas State receiver was able to beat the jam attempt by the Georgia corner.

Another area of Bayless’ game that was nice to see was his consistency in finding a soft spot in the zone and working back to the football. He does exactly that on the play above as he runs a dig route right into the soft spot in the Georgia Southern defense. He finishes off the play by taking small subtle steps back towards his quarterback in order to secure the catch.

Numerous teams, including the Pittsburgh Steelers, put a lot of focus on what their receivers do when the ball does not come their way, especially in the blocking department. It is always a welcome sight to see a receiver give his body and put in the dirty work and Bayless seems willingly to based off of his game tape. He takes this Florida International cornerback for a ride on the play above and puts some icing on the cake with how he finishes the block. You can bet that blocks like that will catch the eyes of more than a few NFL personnel from various teams.

There are a few frustrating concerns with Bayless as well. He does suffer from concentration drops and some of these drops have come in big moments. The Arkansas State receiver should have an easy, walk in touchdown on the play above but the football bounces right off of his fingertips. Circle this as one area that is going to need some polish.

Now, Bayless put in a wonderful final season at Arkansas State and that earned him a trip to Indianapolis for the NFL Combine. Unfortunately, the Combine did expose more than a couple of his athletic shortcomings. Bayless ran a pedestrian 4.62 40-yard dash and his 3-cone time of 7.35 seconds was also very poor. The receiver’s lack of agility and top end speed may not have costed him at Arkansas State but it may cause him problems at the next level.

Bayless put up monster numbers last season and he showed some flashes, even against some top competition but his athletic testing may cost him in a deep receiver class. Just as he worked his way up and proved himself in college, he will likely need to do the same in the NFL.

Games Watched: vs Georgia, vs Georgia Southern, vs Florida International, vs Alabama (2018)