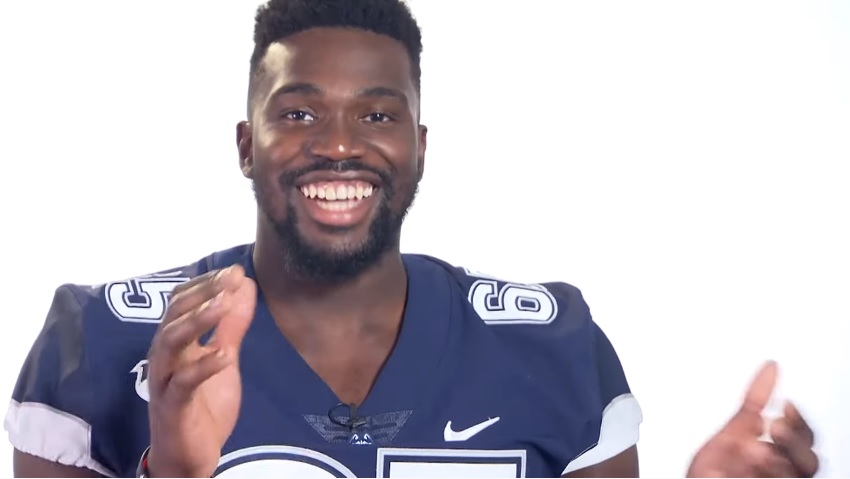 The NFL is dying for tackles with athletic feet and the ability to secure the edge of the pocket. While Matt Peart is far from a polished prospect he has the length, feet and positional skills to be a high-quality project in the NFL. There are questions about his level of competition at U-Conn, but despite that, he’s still an exciting prospect that could turn into a draft day steal with the proper coaching.

You’ll hear quite a bit about length when talking about football players, especially at the offensive and defensive line positions. What that means (in general terms) is that the player with the longer arms has the better chance of dictating the encounter with the other player. Matt Peart has some of the longest arms in recent memory spanning nearly 36.5 inches. At 6-6 and change, Peart has the ability to control just about any encounter that he may come across with a defensive lineman based solely on his overall body length. Peart accentuates this with his ability to pass protect.

Peart is athletic with good foot speed and a quick trigger off the ball. Players of his dimensions usually don’t’ have the ability to play with such quickness. His ability to fire off the ball both in the run game and in the passing game give him a chance to develop into a quality starter or swing tackle.

He shows off that athleticism with his ability to get to the second level and wall off linebackers.

Despite his high center of gravity, Peart shows the ability to quickly work his hips while blocking and wall off defenders in the running game. His effort and intensity are also pluses as a player.

The issues with Peart are the same with any tackle of his dimensions. Length can be a double-edge sword and his long arms can sometimes get away from him and he’ll clutch and grab instead of controlling the blocker. Peart can also let his feet get away from him and if he’s not paying attention in his pass protection, he will lose his base and be pushed back into the quarterback.

The biggest problem however is his lack of overall power. He does not have a highly developed lower body and susceptible to being pushed off balance. With a high center of gravity, it’s critical that he improve this or he’ll be rag-dolled by edge rushers who can covert speed into power at the point of attack. While Peart is a good athlete, he does struggle to fire out of a three point stance and maintain his balance. This results in some lunging and leaning instead of using his quick, controlled feet to move defenders.

The good news is that most of Peart’s flaws are correctable and if he gain enough mass and power, he has a chance to be a quality starting tackle in the NFL. That’s worth a roll of the dice in the middle rounds.