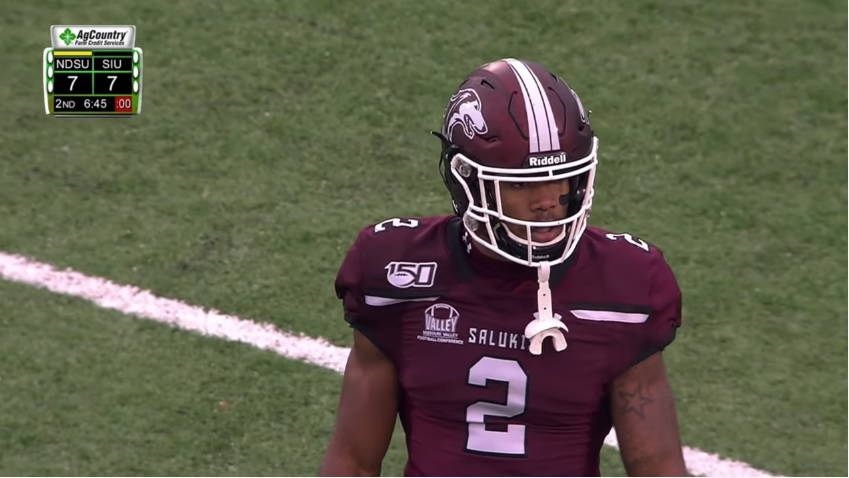 Here is another small school height/weight/speed safety that teams with ogle in the pre-draft process. The FCS All-American was used in various alignments and showed very good mental processing and versatility as well as being an active communicator to get everyone on the same page. Very good ball production throughout his career with at least 3 interceptions in every season.

Against the pass, he aligned primarily in a Cover 2 scheme aligning to the field side of the formation but was also used in Cover 1, the slot in Man coverage and in the box. On big Nickel and Dime coverages he played in the box in more of a LB position to cover the middle and spy on the QB.

From the deep safety he shows good speed and range to cover towards the sidelines and gets downhill quickly to help against runners who break through. When in the slot, he played in Off Man coverage and showed the speed to run with all-comers and was solid reading routes showing closing speed and using his length to play the ball. Playing in the box or near the line of scrimmage he diagnosed very well to attack routes by RB’s and good awareness and quickness in Zone to undercut routes in the short area. He tracks the ball well on all three levels allowing opportunities to break up the pass. He displayed good timing and speed when blitzing through the middle of the offensive line.

At Youngstown State, he starts out on the slot and moves inside with the motion.  He’ll read the RB wheel almost immediately and gets back to make the interception.

Vs Youngstown State, he’s in Off Man coverage on the slot receiver and shows off his closing speed and length to break up the pass.

Vs North Dakota State, in a Dime defense he is the linebacker and will blitz up the middle, avoids the block and gets the sack.

Against the run, he is a willing participant from where ever he is lined up. From the deep safety he uses good angles, gets downhill quickly and breaks down to get under control to help when a runner breaks through.  When closer to the line of scrimmage he reads the mesh point well and he’ll stick his nose in to fill gaps. He’s a very good open field tackler in a one on one situation and he shows very good pursuit always running to the ball.

Vs Youngtown State, against a run inside he comes to the ball under control, wraps with his left arm and reaches out with his right to grab the right foot to limit the gain.

Vs North Dakota State, he’s the safety at the top of the screen and will read the fly sweep and get downhill quickly to keep the runner to a short gain.

Vs North Dakota State, he’s over the slot and will start to blitz, reads the run and shows great effort to chase 25 yards down and across the field to make the tackle.

He will jump the underneath route when playing deep leaving the CB one on one. He played flat footed in Man coverage and wouldn’t start moving until the receiver reached him. He’ll have to change that technique moving forward. When in Zone he could improve his ability to keep his eyes on the WR and QB to not lose site of the receiver. His aiming point, when helping on tackles is too high, and doesn’t provide a lot of pop in his tackling. When playing closer to the LOS he will lose sight of the ball in the pile and miss on chances to make plays. He needs to improve on taking on blocks from his outside shoulder so he doesn’t get pushed inside.

Vs North Dakota State, he’s covering the tight slot and keeps his eyes on the QB and loses track of where the WR is and overruns the catch point. Very good recovery to help on the tackle.

Chinn is a knowledgeable, athletic and versatile defender who will fit in any defense. He doesn’t make wow plays but he plays well consistently. His combine numbers were very impressive finishing in the top 5 in 40 time, vertical and broad jump. Teams will be able to use him as a deep safety, in the box or to cover big WR’s and TE’s in the slot but early on he’ll be better closer to the LOS and to cover in the short and intermediate areas as well as a being a key special team player.