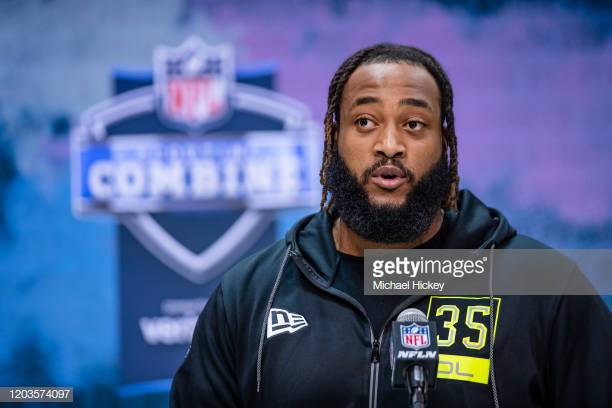 A top 50 tackle coming in to college, Lucas Niang made strides in his time at TCU. He wasn’t able to run the drills at the Combine due to recovering from surgery on his hip but he measures well with very good arm length and good hand size.

As a pass blocker, he shows very good athletic ability and good quickness out of the snap. He can get good depth in his drop step and uses good angles positioning himself on the inside half of the pass rusher.  He varies his punch timing and will use fakes to try to get the defender to commit his hands. He uses very good leverage and his length to his advantage to keep rushers at a distance. He has very good mental processing and adjusts to twist and stunts smoothly.  He learns on the fly and will adjust to defenders moves and be ready for it the next time.  Good agility to slide lateral in protections, has a good anchor vs power rushes and can get depth to handle speed on the outside.

Vs Ohio State, good quickness at the snap and solid kick step while keeping a half man mentality to handle the edge rusher.

Vs Texas, the footwork isn’t great here likely do to the hip but the mental processing to smoothly pass off the twist is good.

His footwork at the snap varied in the games watches including taking a step forward on some pass sets in 2018 and backpedaling in 2019 but that may have been a result of his hip issues. With some patience his punch can be more effective. He would punch early and it would leave him reaching instead of stunning.  His hand placement varies and may benefit from keeping them lower and inside more consistently and would like to see him use his hands to chop to get defenders of balance. He handles inside moves and power rushers more consistently than speed up the outside. His cut blocks were about 50/50 cutting early on his misses.

Vs Ohio State, he’ll face speed on the outside. His hands come out wide and he can’t quite match the speed around the arc leaving him to wrap his arm around the rusher.

As a run blocker, Niang uses very good leverage, length and play strength to move defenders on Gap blocks. Whether it was down, base or drive blocks he consistently won in one on one situations.  He got good movement in double team and combo blocks getting hip to hip with teammates to displace defenders. He has very good mobility capable of pulling, getting out in front of screens or executing reach blocks on Zone runs. He showed very good competitiveness in 2019 trying to play through his injury.

At West Virginia, he and the right guard will pull to the left and he shows good mental processing to pick up the most dangerous man and wall him off.

Vs Oklahoma, on a Zone run to the right.  He gets a helpful jam from the TE and he uses his mobility and strength to get to the outside and take his man 6 yards downfield.

Vs Oklahoma, here is a one on one block where he uses leverage and hand placement to control the defender and footwork to slide around him to keep himself between the defender and the ball.

Vs Texas, he’ll control his man for a two count before releasing to get out in front of the reverse.  No big blocks here but shows his mobility and this was his last game before shutting down with the injury.

He doesn’t consistently lock onto defenders with his hands and may be even better if he can control the defender that way. When blocking on the second level he needs to breakdown a little sooner to have a better chance of staying in between the tackler and the ball.

He has the makings of a very good pass blocker with the strength, mental processing and mobility to handle most rushers. He can improve on the consistency of his kick step, punch timing and hand usage. Even playing through his injury, Niang showed an impressive ability to move defenders in his vicinity as a run blocker.  Very good strength, leverage and drive to win consistently.  He has the athleticism to play in Gap or Zone running schemes. The medical on his hip will have to come back clean and if it does he should go early day two at the latest.