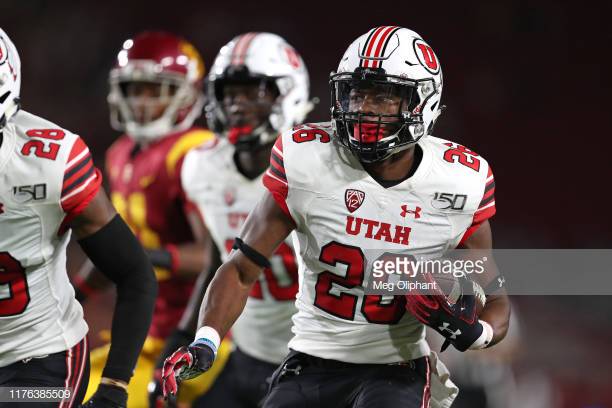 Just because you play all over the field does not mean that you should. Utah safety Terrell Burgess lined up at just about every position in the secondary for the Utes this past season. He saw snaps at linebacker, edge rusher, slot corner, box safety, linebacker wide corner and deep safety. He gets credit for being able to digest that amount of information and for playing his role but going forward he will likely be limited to either a slot corner or deep safety in the NFL. The reason for that? He’s simply not great at the point of attack.

That’s not to say he’s a bad tackler or that he’s without the ability to play the run.

Either way, his size and dimension do not project him as a stellar box safety, which was his primary role in college. He will have to find a new home in the NFL, starting at either slot corner, or free safety. Burgess does show decent instincts to attack balls in underneath zone coverage.

Yet despite the plays above, he does not have exceptional ball skills and does not force a high amount of incompletions in zone coverage.

That leaves slot corner as his best, and maybe only position moving forward. Luckily he has the skills to have a shot at this position. The San Marcos, CA native has lighting quick feet and tested well at The Combine, running a 4.46 forty yard dash at 202 pounds. Utah runs a man-heavy scheme and Burgess saw plenty of time lined up as a slot corner in man coverage.

Burgess also had some of the tougher assignments too, having to cover lanky tight ends who flex out into the slot. He showed good fight and didn’t get bullied, despite giving up considerable height and weight. His quick feet and fluid movement skills allowed him to stay with just about anyone in college.

Yet even then, Burgess has a considerable red flag as a slot corner. His arms measured at only 29.5 inches at The 2020 NFL Combine, which is well below the threshold for a corner in the NFL. His lack of reach along with his inability to play consistently with strength against the run are two big red flags for a slot corner.

There’s no doubt that Terrell Burgess has the athleticism to play in the NFL. Despite his average play against the run, his arm length may be the nail in the coffin of his Day 2 draft hopes. Teams that do not lean heavily on physical measurables will love his man cover skills and may snag him at the start of Day 3.