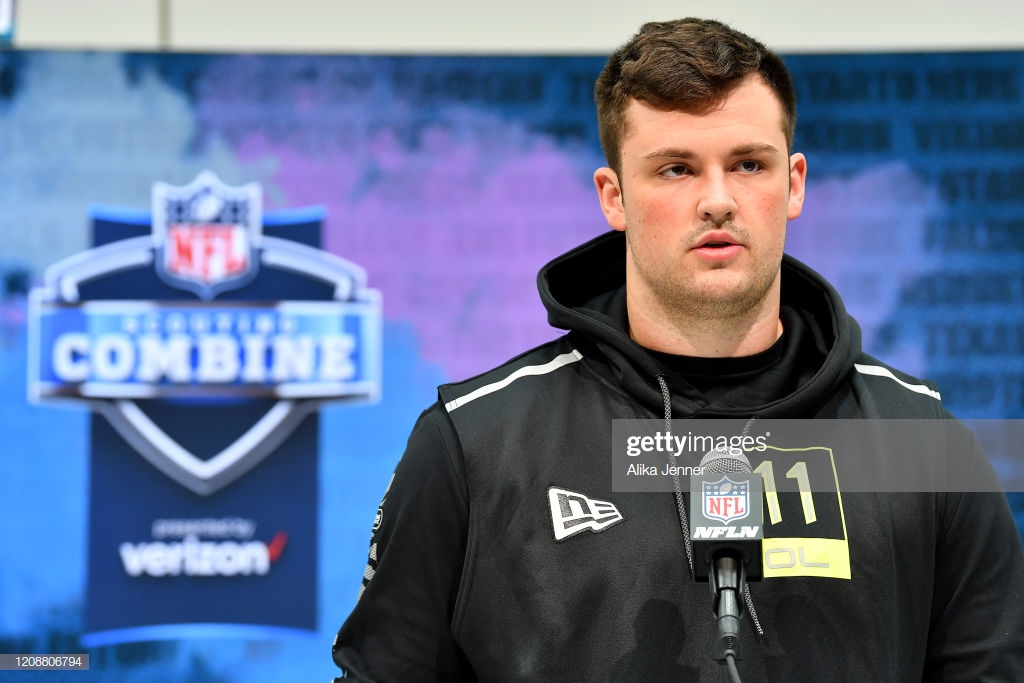 – Well-built frame with enough length (33 3/8 inch arms) to play tackle
– Highly impressive athlete, smooth, coordinated, and rare fluidity for his size and position
– Gets out of his stance consistently quickly, able to get depth/width on his kickset and makes it look effortless
– Feet/hand use work together, maintains a great base with knee bend
– Handles speed rushes with ease, seals edge effectively and rarely beat at the top of the arc
– Good run blocker who works well in space, climbs to 2nd level and sticks on contact
– Desire to finish his blocks, overwhelms smaller ends/linebackers and drives feet on contact, playing to whistle and shows some nasty to his game
– Overall, technical player who shows great refinement in his punch, placement, ability to repunch and anchor against bull rushes
– Steady player who doesn’t show many flaws in his game
– Lots of starting experience
– Tested at an elite level at the Combine

– Struggles more against power rushes/rushers than speed and finesse, can get outlveraged by bull rushes and expose chest
– Can get beat on inside rushes and counters, will struggle to mirror against them
– Bit lower level of competition, hard to find him going against top pass rushers
– Small hands for frame (nine inches)
– Not a dominant, imposing run blocker
– Seems a bit tall and upright out of a three point stance, teams may tweak it

The Steelers showed interest in Cleveland, wanting to bring him in for a pre-draft visit for the coronavirus pandemic changed those plans. Their interest is well-founded. Cleveland, funny as it is to think about, would be a great fit in Pittsburgh. But thinking about it is as close as it’s going to get to happening. After watching his tape, it’s hard to imagine him falling anywhere near #49.

In a word, as I wrote above, Cleveland is smooth. Athletic, his testing indicates that, but it translates to the tape. His movement is effortless. He’s quick out of his stance, plays with a great base, and easily dominates the edge. Wins routinely. He’s the left tackle in all these upcoming clips.

Hands and feet work together and he’s coordinated, rarely on the ground on his own accord. As a run blocker, he isn’t dominant, but more than functional and plays with an edge and desire to finish.

It’s hard to find a lot of flaws in his game. My notes are riddled with plays, nearly 90% of them positive. You see the same guy every single week. The one area I’d note is that he can struggle against inside moves. Will struggle to change direction and seems to sit on the outside rush a little more.

This tackle class is one of the best over the last 10-15 years, meaning Cleveland’s name has gotten lost in the shuffle. Playing out west in Boise doesn’t help either. But in any other year, he’d be a slam dunk first round pick and to me, should still sneak into the back end of Round 1.

My player comp is a bold one but I see the next Joe Staley.