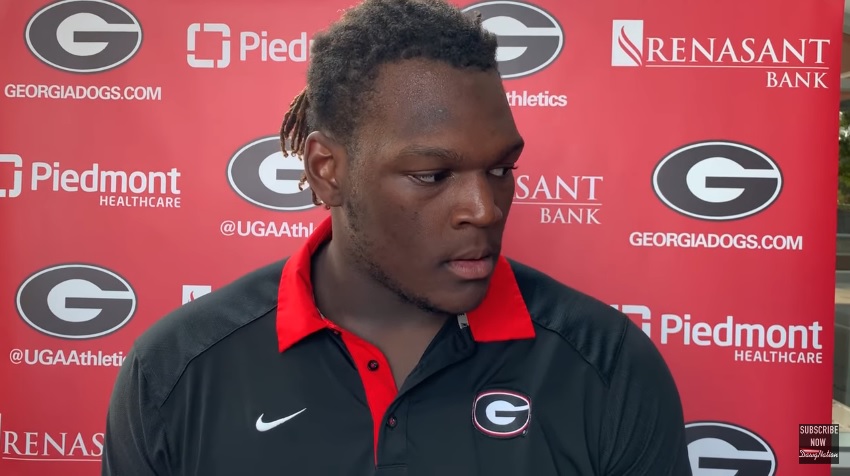 An early entry into this year’s draft, the red shirt sophomore right tackle still has two years’ worth of starts under his belt in the SEC. He is a huge tackle with very good length measuring in with 35.5 inch arms. The Bulldogs ran a lot of inside zone and man blocking schemes in the run game.

As a pass blocker he shows good quickness ant the snap and gets solid depth with is kick. He does a solid job of sliding up the arc to handle speed rushers and uses his length to push them past the QB. He’s solid against B gaps rushers able to cut off their lane. He displays a good anchor vs power rushers using his size and core strength to dig in and stop the rush. He shows solid mental processing on stunts and twists to pass off and pick up.

Vs Alabama, here is a solid rep up the arc where he gets his hands cleanly on the defender to keep him outside.

Vs South Carolina, the defender will run a speed to bull and gets his hands into the chest of Wilson and looks to have the advantage but he is able to reset his feet and drop anchor to give the QB room to throw.

His hands come out wide and late exposing his chest to the pass rusher which adds to his upright stance in pass pro and negates the advantage he has with his length.  He often looks like he’s dealing with hands to the face but it’s the defender getting his hand on his chest and driving him up. Quicker speed up the arc will force him to reach and overextend and bend at the waist. Rushers with good lateral quickness can beat him to the gap and he is susceptible to inside spins when trying to guard the arc.

Vs LSU, he overset expecting speed outside and the defender spins inside to get the sack.

Vs LSU, the defender with jab inside and use speed up the arc. Wilson’s first step is more lateral than deep and ends up reaching and bending at the waist.

As a run blocker, he displays an aggressive mentality firing out into his block and gets a good push on down and double team blocks. He is able to stalemate on most one on one blocks and stay between the defender and the ball. He shows solid mobility to pull to his right and get outside on outside runs and get a push on second level blocks.  He has good timing on combo blocks and is able to drive LB’s out of the way. I didn’t get to see him pull left but he should be able to handle short pulls and fold blocks.

At Auburn, he executed a drive block on DE and uses good leverage and leg drive to move the defender.

Vs LSU, he’ll chip the defensive end on his way to the second level and drives the LB 10 yards downfield.

Like pass pro, his hands are outside and low limiting his ability to maintain and control defenders. His aggressiveness got the best of him against quick defenders who could laterally side step/swim over his block. He may not have the lateral quickness to handle outside Zone blocks consistently.

Vs Florida, he fires out and the defender is able to sidestep him and get in on the tackle. This happened about 4 times in this game.

Wilson has the intangibles you can’t teach like size, length and an aggressive demeanor. He has a good base to work with and plenty of room to grow. Improving his use of hands is priority one as that will allow him to use his length and increase his ability to control. His lateral agility is not as ideal as you would like and will need to improve to handle speed rushers on the outside.  His best fit would be in a Gap or Inside Zone scheme.

Teams will like the fact that he is younger (turning 21 just before the draft) than the average prospect and that may push him up boards a little bit probably around the middle of day 2. I feel he would benefit if could be a backup his first year or at least part of it to work on fine tuning his overall game but should blossom into a quality starter in the near future.