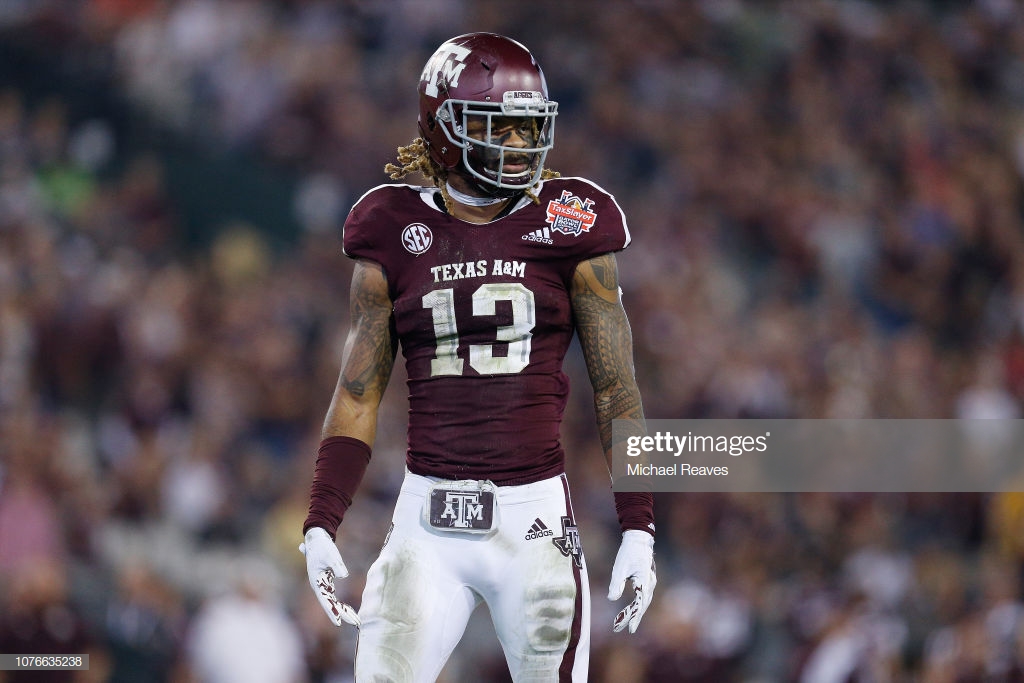 -Really struggles to separate from coverage
-Limited route tree despite length experience
-Habit of completely disappearing from games for long stretches; effort is a concern
-Took a massive step back from 2018 to 2019; looked heavier on tape
-Can be completely shut down by press coverages; releases are slow and telegraphed
-Slow in and out of his breaks and lacks urgency at times working back to the football

-Redshirted during 2016 season; declared early as a redshirt Junior this winter
-Played in 38 career games, starting just eight total
-Finished three-year career with Aggies hauling in 68 passes for 786 yards and seven touchdowns
-Recorded 30 receptions for 351 yards and two touchdowns in 2019
-Invited to 2020 NFL Combine, where he posted a 4.51 40-yard dash, 35.5-inch vertical jump, 124-inch broad jump, a 7.13 3-cone drill, and 17 reps on the bench
-Averaged 11.6 yards per catch for his career
-Former 3-star recruit

If there’s one player in the 2020 NFL Draft class that really missed the boat by not declaring last year, it’s Texas A&M wide receiver Kendrick Rogers.

Rogers blew up the scene late in 2018 for the Aggies, putting up some impressive showings against top programs in Clemson and LSU. That close to the season – and his decision to head back to A&M – had draftniks alike buzzing about Rogers’ potential heading into 2019.

Unfortunately for the 6-foot-4 vertical threat, 2019 was a major step backwards from a production and effort standpoint, resulting in Rogers’ draft stock plummeting.

Through two games of film from 2019, Rogers looked borderline undraftable, but that 2018 tape showed what a motivated receiver could do when he was engaged. The issue is getting him engaged again. Maybe that had to do with playing in a system with a QB who was known more for his legs than his inaccurate arm, coupled with an offensive line that struggled to protect all season long.

I get serious Kelvin Benjamin vibes with Kendrick Rogers, both good and bad vibes. Interestingly enough, the coach for both Rogers and Benjamin in college was Jimbo Fisher.

When Rogers was asked to be physical and play above the rim, he thrived much like Benjamin did.

Here against Northwestern State in 2018, Rogers flashed the monster catch radius and ability to thrive above the rim. Look at the relative ease with which he rises up and plucks this football out of the air.

Later in the season against Clemson, Rogers really showed his skillset.

One very weird thing with Rogers is that he struggled with focus drops close to the line of scrimmage, but once he worked down the field his focus level seemed to heighten, leading to some insanely acrobatic catches.

Here on the crossing route against Clemson, Rogers flashes great concentration and body control to make this spinning, finger-tip catch over the middle of the field, exposing his mid-section to a possible monster shot.  When the ball is in the air, he has a mentality that it’s his –which is great.

This was one of the catches of the year last year, and it came against LSU.

Watch Rogers’ eyes here. He never gives up on this play and tracks the football so well through contact. SportsCenter quickly put this catch up on its Top 10 plays that week, thrusting Rogers’ name into the limelight.

In the same game, Rogers again showed good body control in the air.

That’s a great job creating separation and flipping his hips around to make a play on the back-shoulder throw for the touchdown in Texas A&M’s OT thriller against LSU.

When he was locked in and really engaged through the air, he was a matchup nightmare. He even showed some wiggle after the catch.

Against Clemson, Rogers showed what a physical receiver can do. He was tough to combat in the air, and the one time A&M got him the ball in space, he slipped a tackle, broken a second one and ripped off a chunk play.

The problem is, he appeared to be heavier in 2019, was much less explosive and lacked urgency in his routes, especially when fighting back to the football. He was mostly a mess in 2019, but give him credit: he was definitely prepared for the Combine.

I just can’t shake the Kelvin Benjamin vibes I get with him. Yes, Benjamin was terrific early in his career, but then he ballooned up, lost explosiveness and found himself out of the league quickly.

If a team can feel comfortable enough to take a shot on a guy who wins above the rim the way Rogers does, they could unearth a gem if they can get him slimmed down and focused. With his size and skillset, he’s worth a flier.