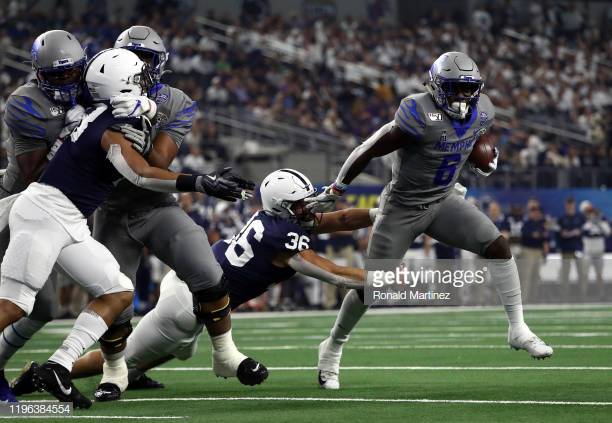 – Well-built frame, broad shoulders with big lower half, unusual size for the position
– Decisive runners, gets square and shoulders downhill
– Has patience and vision, follows his blocks and plays within structure well, doesn’t often guess wrong and gets what’s blocked
– Runs hard, keeps legs churning through contact and routinely falls forward
– Nose for the end zone, finishes at the goal line, reflected in TD numbers
– Shows decent burst and ability to win the edge, long strider who makes up a lot of ground
– Good hands as a receiver, catches the ball cleanly and can be an asset in the short pass/screen game
– Willing pass protector who gets square, shows desire, and has frame to help absorb power rushes against blitzing linebackers

– High-cut, stiff player who doesn’t show any special athletic trait
– Has trouble creating beyond what’s blocked, doesn’t make much happen in the 2nd/3rd level
– Lacks home run speed, doesn’t run away from anyone in the open field
– Struggles to make nuanced cuts and change in direction as a runner; tight, straight-line runner
– Failed to have an overly productive career, part of a rotation and rarely had to be “the guy” for any string of games
– Lacks balance and loses footing too often when trying to put his foot in the ground and make cuts
– Didn’t test well at the Combine, average athletic profile (4.57 40, 34 inch vertical)
– Injury caused a quiet 2019 season, production dipped heavily

Any running back closing in on that 220+ pound mark is one worth taking a look at. Pittsburgh’s drafted almost exclusively those types of guys since the Dri Archer/Chris Rainey mistakes. Le’Veon Bell, James Conner, Jaylen Samuels, and Benny Snell. You get the point.

But Taylor didn’t excite me the way I had hoped. His tape is ok in every sense of the word. Nothing terrible, sure, but when I’m drafting a college running back, and there are always so many to choose from, you gotta bring something special to the table. And I’m not seeing that.

To the positives, Taylor is a defined, downhill runner. Like his ability to follow his blocks, square his shoulders, and he shows an impressive finish, aided by his frame, to fall forward and squeak out an extra yard or two.

Watching his 2019 tape, limited by his foot injury, I did think he improved late in the year when he was further removed from the injury suffered in the opener. His Penn State performance was one of his strongest and he does have a nose for the goal line, something the Steelers certainly value (Randy Fichtner talked about it in relation to Jaylen Samuels last year), like this score against in the Tigers’ finale.

But I struggle to see how he wins independent blocking and falling forward for some extra YAC. He lacks homerun speed and is a tall, tight runner, who doesn’t have much wiggle to make guys miss in space. Doesn’t turn good runs into great ones and gets taken down in the open field with relative ease far too often.

It’s just hard to pound the table for this guy. He’s not a terrible, incredibly flawed prospect. But there isn’t much I get excited about. Worth bringing into a camp. Probably not worth investing a pick into. When it comes to Memphis’ prospects, I’m much more enthralled with Antonio Gibson as opposed to Taylor.

Hard to offer an NFL comp but I’m going with Alfred Blue as a ceiling, who had a committee role at LSU and had a couple middling years with Houston.

Games Watched: at Missouri (2018), vs Ole Miss, at South Florida, vs Penn State