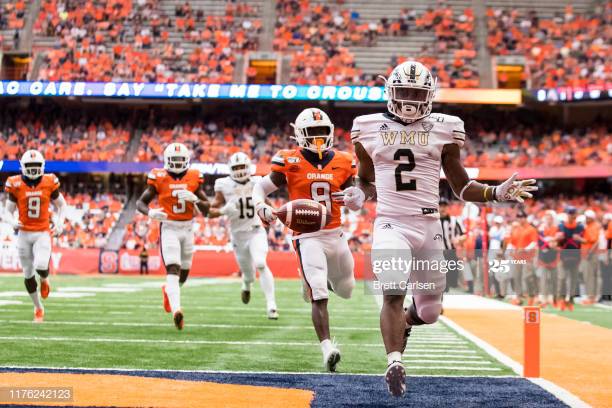 Western Michigan running back LeVante Bellamy really put a stamp on his collegiate career with a huge 2019 campaign. The running back rushed for over 1400 yards and scored an NCAA-leading 23 touchdowns. With his play, Bellamy was named MAC Offensive Player of the Year.

It would seem unusual to compare the Western Michigan running back to Le’Veon Bell seeing as the two have huge differences in size but both running backs share one trait in common. They are both very patient runners that wait for the hole to develop rather than just plowing ahead into the trenches.

Here is another example of Bellamy being patient and waiting for a running lane to appear before shooting through for a huge touchdown. Watch as his first step towards the right tackle is able to draw in the opposing safety (#13), this leaves a wide opening up the middle and the safety is now out of position to catch Bellamy as he scampers easily to the end zone.

Bellamy also does a good job at drawing defenses in, leaving them vulnerable and not in position to make a play on him. He presses the line of scrimmage effectively, drawing in defenders before bouncing to his intended lane. Watch as he draws in the edge defenders on the play above before bouncing back outside for a big gain.

With his size and speed, Bellamy has the perfect makeup to be an effective change of pace back at the next level. With his speed and quickness, the Western Michigan running back has the speed to not only go the distance but also to beat defenses to the perimeter.

Running backs must get what is blocked for them, that is obvious. But the great running backs must be able to generate additional yardage and create more yardage on their own accord. Bellamy shows ability to do just this as he has the ability to side step defenders that have jumped into the backfield and can then use his vision to create more yards. While the Western Michigan running back only gains a few yards above, he is still able to turn what should be a negative or neutral result into a positive gain.

Now onto the concerns with Bellamy’s profile. He is not overly elusive as his lateral agility can sometimes be slow and segmented rather than smooth. He also has more of a higher jump cut rather than natural shiftiness. Though this did not affect his production in college, it could be a factor at the next level considering his already small size.

Speaking of Bellamy’s small stature, his frame may also be a hot topic when it comes to discussing his outlook in the NFL. The Western Michigan running back is just 5’9 and 192 lbs and that is generally lighter than what teams would expect from an every down back. Questions such as if he can handle a full workload between the tackles seem obvious and this may reduce Bellamy to a change of pace role or third down back.

While there are some concerns with his size, Bellamy’s production cannot be taken away from him. He is a patient and speedy runner who understands how to set up his blocks and can win with speed to the outside. Whether that translate into an every down role remains to be seen but there should be room for Bellamy somewhere in a running back rotation. Add in his experience as a kick returner and he should find a role in the NFL by the team that selects him.