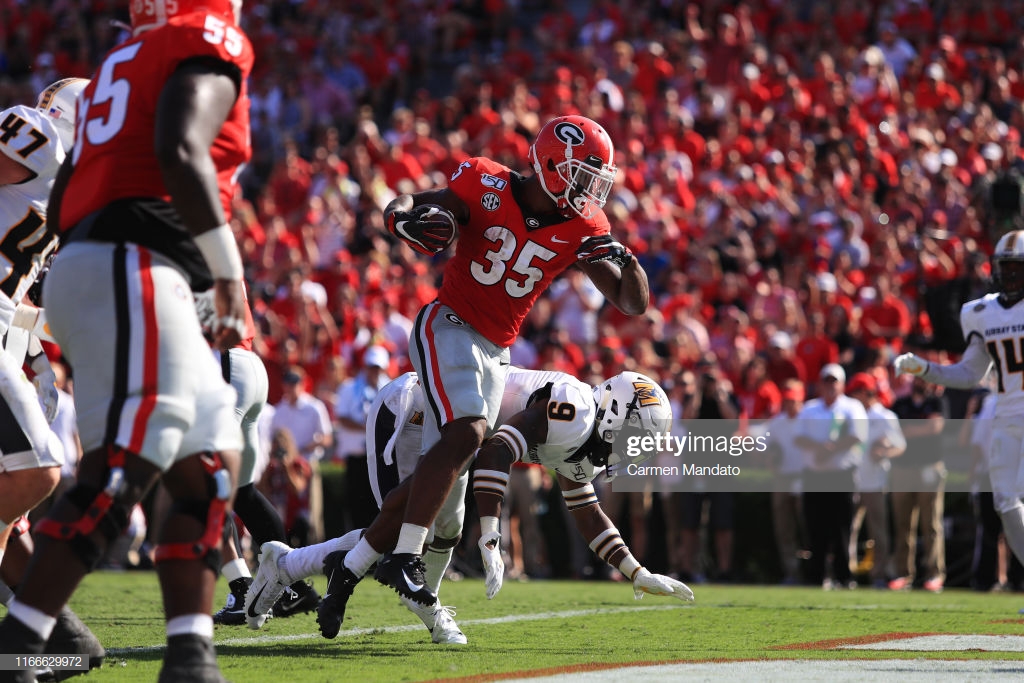 -Ideal build for position; well-proportioned frame
-Good short-area burst to explode up the field
-Impressive contact balance, consistently bounces off defenders on tape
-Sneaky good elusiveness; forces quite a few missed tackles on tape
-Will stick his nose in there as a pass blocker and fights on each rep
-Flashes soft hands as receiving back
-Limited wear and tear for run style
-Tremendous ball security; just one fumble in nearly 300 career touches

-Lacks long speed to rip off consistent impact runs
-Dances too much in the backfield and will run himself into trouble; doesn’t show a ton of trust in blocking
-Lateral speed is a concern; struggles to turn the corner with consistency
-Run style leaves him susceptible to some hard shots
-Full-time backup that never challenged for starting role

-Appeared in 52 career games for Georgia during four-year career
-Started two games in 2019, against Vanderbilt and LSU
-Finished four-year career with 277 carries, rushing for 1,413 yards and 13 touchdowns. Added 28 receptions for 167 yards and two touchdowns
-Part of a senior class at Georgia that won 44 games, tying school record for a single class
-Invited to 2020 NFL Combine; clocked a 4.62 40-yard dash, added 18 reps on the bench, jumped 38.5 inches in vertical jump, added a 126-inch broad jump and a 7.12 3-cone drill

Coming from a program rich in history at the running back position, it’s understandable to see why Georgia senior Brian Herrien was lost in the shuffle. Georgia has churned out some serious NFL talent in the last few years at running back in guys like Nick Chubb, Sony Michel, and now D’Andre Swift this year.

Despite being plastered to the bench at times with the Bulldogs, Herrien has some decent tape available in his limited action.

Possessing good size for the position, Herrien looks like a natural runner between the tackles. He runs hard and has really good contact balance for the position. He even adds in some elusiveness to his game.

This run against Tennessee in 2019 – which happened to be the best game of his career – really showed me what type of runner he is.

One good thing about Herrien is that he can create on his own. Now, I did write earlier that he dances too much in the backfield and runs himself into trouble, but when he absolutely needs to, he can. I love the elusiveness early in the run, and then the power and balance to break tackles and stay on his feet.

I’m a big, big fan of the power Herrien packs in his frame. He’s not the most fleet of foot (as you can see on this run), but he runs behind his pads and will dish out punishment.

What I wanted to see on film with Herrien was burst and explosiveness. This run showed me that.

You’ll see some backs hesitate on draws, but Herrien takes the handoff, sees the lane and plants his foot and bursts up the field. That short-area burst near the line of scrimmage lets him get clear of the first level and allows him to rip off a chunk run.

I do like Herrien’s vision at times. It’s not a strength of his, but he has a feel for what’s developing in front of him, and he can find daylight. Then, when you add in his ability to break tackles, you’ll get runs like this.

One area of concern I have with Herrien is his lateral speed. He doesn’t have great long speed, and his lateral quickness is below par for the position. He struggles to turn the corner with any type of consistency on stretch runs.

While he does win against Notre Dame in the clip above, you can see the struggle to outrun the slower edge defender before turning the corner super late in the run.

Final thoughts on Herrien – with limited wear and tear, and some decent tape, he’s worth taking a shot on late. He has really good contact balance, rarely – if ever – fumbles, and has kick return and pass catching experience. Ideally, he’s a solid No. 3 back with the ceiling of developing into a good No. 2 and third-down option.