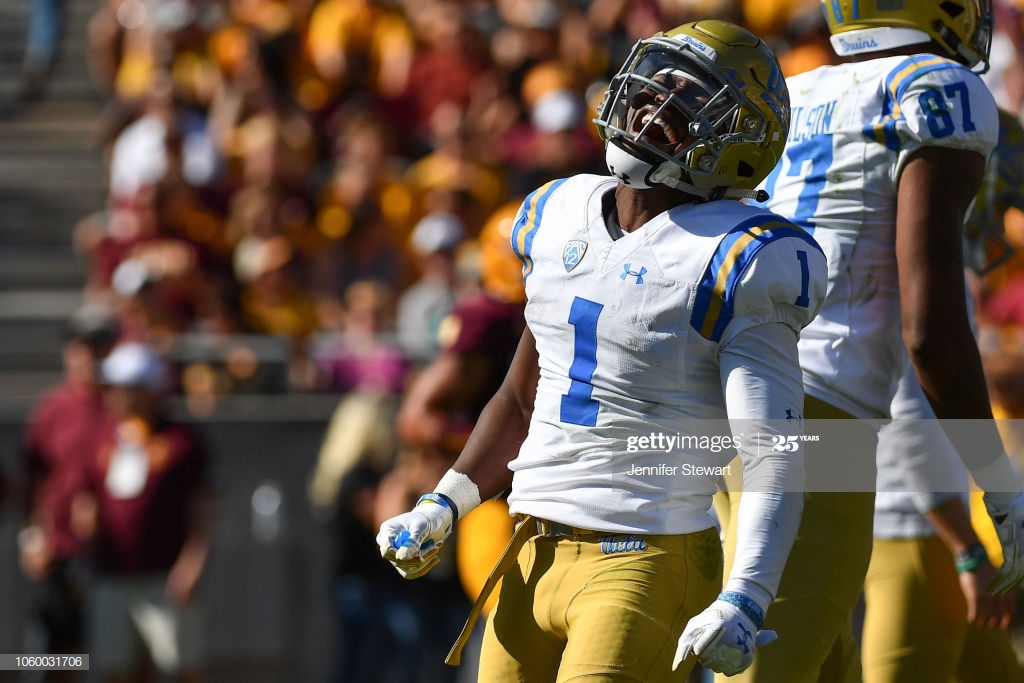 While cornerback is far from a position of need in Pittsburgh, with Kevin Colbert’s BPA mantra a late round selection is far from out of the realm of possibility.  Enter Darnay Homes, a prospect who caught some attention of the national media with his seamlessly smooth transitions in the combine drills.  He possesses elite feet and instincts for the position, showing the versatility coveted in smaller cornerbacks as well as the tackling ability to man the slot.

One aspect that really jumps off the tape with Holmes is speed and explosiveness.  One of the most impressive, high IQ plays I have seen from a cornerback in this class, Holmes hawks Arizona’s running back on what looks to be a sure touchdown, opting for the “peanut punch”, saving a touchdown in the process.  Equally impressive, Holmes lines up in press man on Hollywood Brown (4.32 speed) working out of the slot with outside leverage, mirrors his inside release and makes a nice breakup on a fly route.

When Holmes is at his best, his instincts allow him to make some elite plays.  Here, in press coverage, Holmes beautifully mirrors the receivers release, playing opposite the stick and taking the slant to the house just before halftime.  It’s this kind of playmaking ability that makes it easy to get excited about Holmes’ ability to translate to the NFL level.

Don’t let Holmes’ small frame fool you, coming downhill he can pack a punch that would make Mike Hilton proud.  Here playing cover 2 out of a press alignment, Holmes does a great job of rerouting the #1 receiver, before coming downhill in a hurry to plaster the Colorado tight end for a short gain.

With how woeful the Steelers kick return game has been for some time, which is to say for as long as I can remember, having kick return experience certainly adds to Holmes value.  He averaged a healthy 23.1 yards per return and showed some real shift and explosiveness taking one to the house here against Stanford.

As a small statured corner, lacking the necessary length to get a punch and disrupt in press, Holmes’ aggressive reliance on instincts can get him in trouble at times.  This year against Washington State, Holmes was repeatedly beaten downfield out of press, and showed lack of awareness in the process.  Here, with the receiver lined up well inside the numbers, Holmes needs to understand that he must maintain outside leverage throughout the rep.  Instead, Holmes bites hard on an inside stick and is left in the dust en route to a 29 yard score.  Later, he gets caught taking a false “bucket” step out of his break and giving up another easy score on the out route.

Overall, Holmes plays significantly faster than his 4.48 40 time, and has the footspeed, instincts, and ball skills to succeed as an NFL corner.  His physicality and versatility suggest that slot corner could become an ideal spot for him at the next level.  As cornerback remains the Steelers deepest position, any rookie looking to make the roster must be willing and able to contribute heavily on special teams.  Ideally, Holmes could be an immediate upgrade as the primary kick returner, while slowly working out the minor technical issues in his game, namely eye discipline.  In an ideal scenario, my NFL comp would be Jonathan Jones of the New England Patriots.