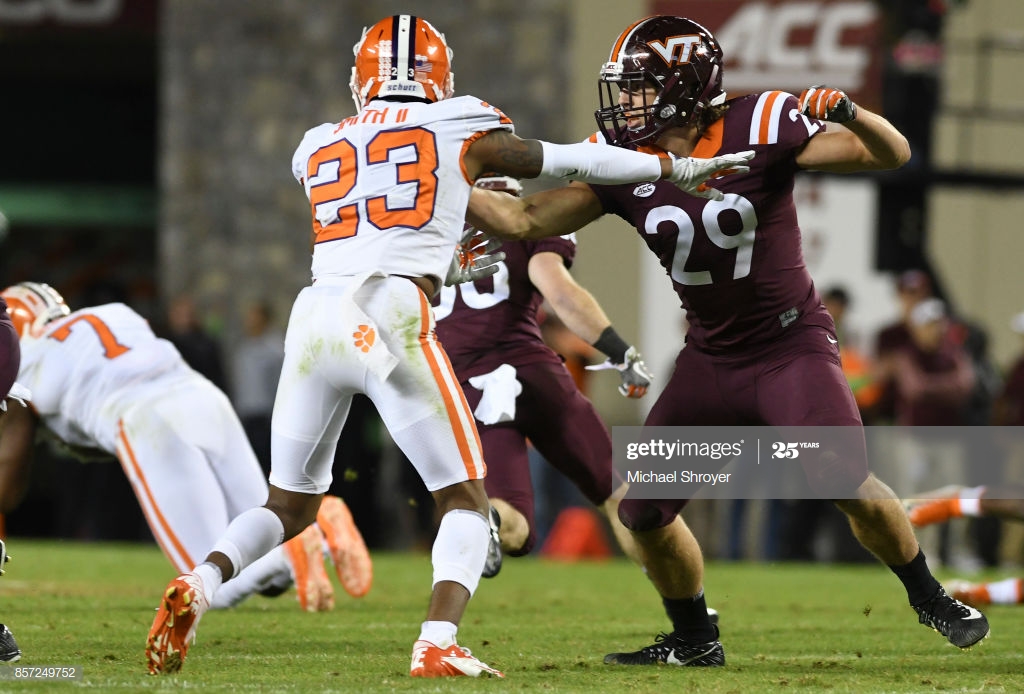 Dalton Keene is another early entrant into the NFL draft forgoing his senior year of eligibility. The Hokie captain showed some versatility in their offense that lined him up often on the wing and in the backfield as well as inline and in the slot. He had modest receiving numbers and chipped in with 11 rushes as well.

In the passing game, he has a solid release off the line of scrimmage from 2 and 3 point stances and was used primarily in the short passing area. The majority of receptions I saw were on flat, curl, shallow drag routes and screens.  He shows good hands and the ability to adjust up and in front of his body. He is aggressive after the catch and shows good agility to make the first guy miss and fights for every yard he can get. He was used on wheel routes from the backfield and go/seam routes from the slot but was not often targeted.

Vs Duke, he is the on the wing and will block before releasing for the screen.  After the catch he shows some agility to make a guy miss, a stiff arm and with take it the distance.

At Miami, from the wing he’ll block and release across the formation for and easy catch and run.

As a pass blocker, he plays with good leverage and hand placement and has good lateral agility to mirror defenders and stay into their body. He was solid inline and good from the wing and fullback positions.  He has good mental processing knowing who to block and keeps his head on a swivel to find free rushers and help others when needed. He was an effective blocker outside on screens to open up space for receivers.

Vs Pittsburgh, he’s on the wing. The play results in a sack but not due to him.  He uses very good hand placement and leverage to stop the rusher at the LOS.

Vs Pittsburgh, he’s in the front of the bunch to the right on this screen. He locks on to his guy, works he’s feet around and finishes the block.

In the run game, he is a high effort player who is assignment sound who can sustain and finish blocks especially from the wing and fullback position.  As an inline blocker, is technique is generally good with leverage and hands and shows good effort to drive and keep his legs moving. From the wing and fullback alignment he has the athleticism and want-to as a lead blocker with the mental processing to work through the traffic to find his man or lead on outside runs. He got better as the season went along continuing to improve with each game. There were several runs where you saw him take his man completely out of the play. As a runner, he was what you’d expect.  He was the downhill, two arms over the ball, fullback-like style on counters running behind two pullers for short gains.

At Miami, he’s on the wing and has a one on one block. He uses leverage, hand placement and leg drive to sustain the block.

At Boston College, he lined up as the fullback. He’ll lead up the middle and keep his legs moving until his guy is on the ground.

Of the sixteen receptions I saw, 12 of those were on routes/plays that were created to get him the ball with delayed releases or miss direction. He is a marginal route runner and didn’t showcase the ability to create separation in his routes on his own. His production was limited to short catches and run after the catch doing very little on the intermediate and deep areas. He was stiff on adjusting to balls thrown behind him and didn’t come down with those passes. When blocking he’ll dip his head, hands go wide and he’ll get over his toes when he overextends but limited this later in the season. As an inline run blocker, he could benefit from added strength to handle one on one situations, needs to be quicker at the snap on the backside of outside Zone runs and need to improve his execution of cut blocks.

At Miami, here he is in line to the right on a run to his side. He dips his head at contact and gets pushed into the backfield.

Keene has some versatility, is a good blocker and solid after the catch.  As a receiver he can be used in the short area on delayed releases and check downs. As a blocker he is tenacious, has good technique and sustains his blocks. He is lean and has room to add some strength and needs to work on his route running if he wants a bigger role.  I think he’ll have a role as the #3 tight end to be used mostly as a run and pass blocker as a fullback or on the wing and will be a core special team player.