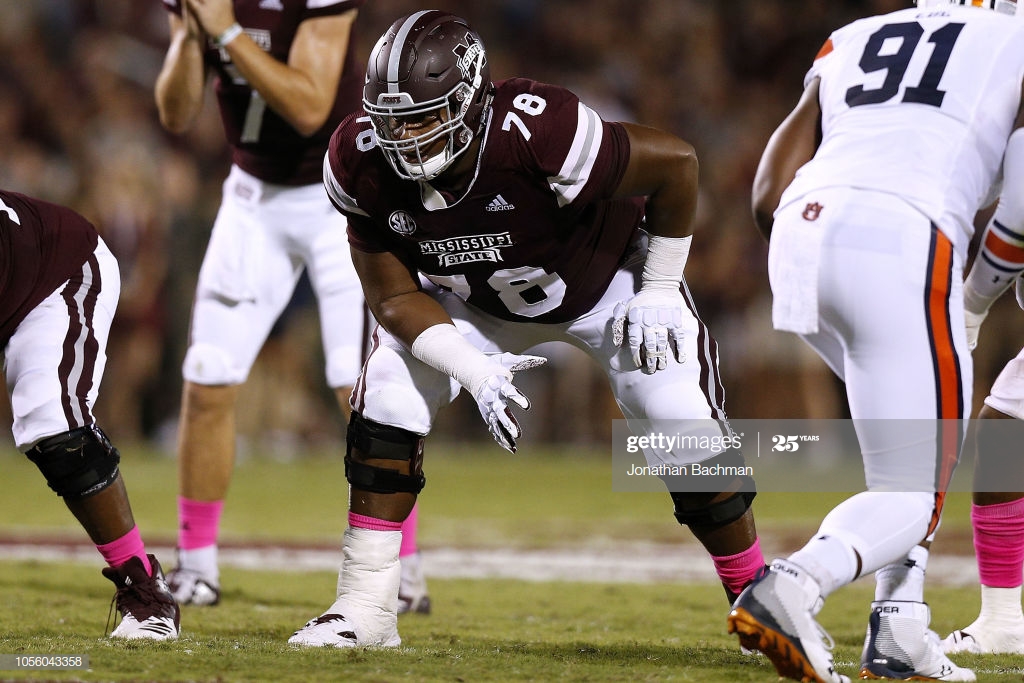 A left tackle for the Bulldogs, Tyre Phillips is an interesting prospect with good size and length (over 35 inch arms) to compete on the outside. He has about a year and half starting experience in the SEC after transferring in from junior college. As a junior he split series at left tackle before taking over as a senior.

As a pass blocker, he has good quickness at the snap and a solid kick slide to get into his set.  He plays with balance, improved half man technique and uses his length to punch rushers and force them up the arc. He has solid lateral agility to slide to meet inside rushers and keep them at bay and has solid use of hands to counter what the defender throws at him. On quick sets he uses hand placement and strength to stalemate at the line of scrimmage. He showed good mental processing handling stunts and looks to help teammates when uncovered. They didn’t run many screens but he looked solid on the few opportunities.

At Texas A&M, he gets a good push to the inside and smoothly picking up the twist to the outside.

Vs Louisville, it’s a quick set with good timing with his punch at the LOS and shows good feet to slide with rusher before getting knocked off the block by a teammate.

As a run blocker, he has good quickness at the snap and can generate movement on down and double team blocks. With one on one base blocks he is consistently able to stalemate with opponents with his size and length.  He has good agility used not only on short pulls to the inside but all the way across the formation on outside runs to the right and good execution of hinge blocks on the backside of runs. He displays good timing and execution on combo blocks to get a good push before moving to the second level and swallowing up linebackers.

Vs LSU, here is an example of him showing his agility and athleticism pulling to lead on the outside across the formation.

At Texas A&M, he shows light feet to fold inside and lead through the middle taking out the linebacker to open a big lane.

At Texas A&M, he gets a good push to the inside before climbing to the second level to handle the linebacker.

Vs Ole Miss, he uses good leverage and hand placement and to drive the defender back to the goal line.

Speed rushers gave him some trouble especially earlier in the year forcing him to sacrifice technique to try to mirror the pass rusher’s depth. In his pass set he plays a bit high and will allow himself to be driven back on speed to bull rushes. On run and pass blocks he seems to be content with just stalemating and doesn’t play to the whistle or with the aggressiveness you’d like to see in your linemen.  I would recommend he play in an outside Zone scheme not showing the lateral quickness to execute reach blocks. His change of direction is marginal and quick defenders can sidestep him on space blocks.

Vs LSU, he will face a bull rush and get driven back to the QB.

Vs LSU, facing speed up the edge he quickly resorts to crossing his feet to try to match the defender up the arc while he uses a stab to get him off balance and pressure the QB

I liked the improvement Phillips showed over the course of the season especially in his pass sets and there is good potential within him.  Speed rushers gave him the most trouble both on the outside and with speed to bull. If he can learn to handle that consistently he should stay at tackle.  If not, he could kick inside to guard where he played in juco and there he wouldn’t have to worry about that as much. I’d like to see a little more aggressiveness from him and see him finish blocks more consistently.  He would fit best in a Gap or inside Zone running scheme.