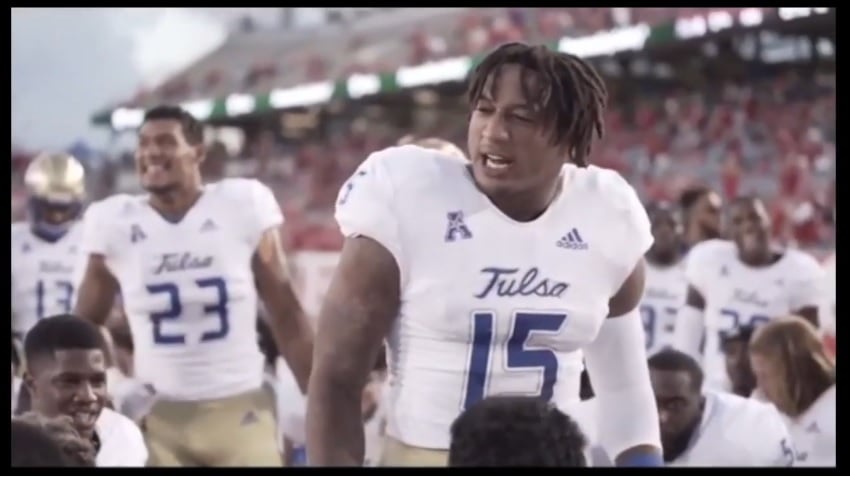 A lean and lanky defensive lineman who lined on both sides of the defense from the 3 tech out to the edge.  He played in a 3 man front in a 3 point stance in a scheme with a mix of 1 gap and 2 gaps.  The initial analysis for him is an unfinished product with lots of potential.

Against the pass, his fit will be on the edge and he is able to cover a lot of ground getting up field at the snap. He can put pressure on the outside hip of the tackle and shows a good dip and rip and able to bend and flatten to the QB. He will also use a spin and a jab outside/cut inside with success to keep OT’s off balance. He shows solid push on power rushes with solid leverage and hand placement. He’s a high effort player with a very active energy forcing the OL to maintain their blocks and was held quite often.  He shows good pursuit behind the line of scrimmage and has a knack for forcing fumbles.  I saw 4 of them in the 5 games I watched.

At Texas, he’ll use a dip and rip under the TE at the top of the screen and show off his pursuit skills and get the sack fumble.

Vs SMU, he use a quick jab shimmy to the outside, gets the LT to open up and has a straight line to the QB.

Vs Wyoming, this rush starts out great with a double chop to get the LT’s hands down and he has him beat around the corner but loses and edge and slips down like a speed skater.

Against the run, he shows solid quickness to one gap and disrupts running lanes. He often played inside at the 3T or 4i which isn’t the best place for him. He has solid mental processing against Zone running plays. He has solid hand placement and leverage when on the edge and shows good pursuit going outside and chasing from the backside.  He has displayed the ability to shed blocks one on one.

At Texas, he’s the 5T near the left tackle. He’s slow at the snap but is still able to get skinny playing 1 Gap and get the ankle of the RB.

Vs Wyoming, he’s in the B gap near the right tackle and will knife inside and make the play with an offensive lineman draped on him.

Many of his negatives are a work in progress where he has shown good things but isn’t nearly consistent as he needs to be. There were glimpses of timing the snap well however his overall get off at the snap is late. His use of hands needs to improve to keep blockers off his body. He didn’t drop into coverage or play in a 2 point stance at all. He has room on his frame to add strength and his balance is adequate to handle blocks and pushes from the side and stay upright. Against the run, he doesn’t have the strength or technique to anchor vs double teams or set the edge. Disengaging from blockers quicker must improve.

At Texas, he’s across from the RT in goal line and doesn’t have the play strength to hold his ground and gets planted.

Vs Cincinnati, he’s against the right tackle and will try a spin move. His technique is sloppy and starts his spin before planting is right foot. This move has worked for him so this is about cleaning up his technique.

As I said earlier he is and unfinished product. He shows a lot of positives but just doesn’t put them together consistently enough yet.  When he does put it all together, he can make eye opening plays.  He would benefit from adding strength and getting coached up on his hand usage, setting the edge and block deconstruction. I think his best fit would be in and even front as the weak side DE in a 1 gap scheme but will need some time to develop overall. Keep an eye on him over the next couple years. He could become a very good pass rusher.