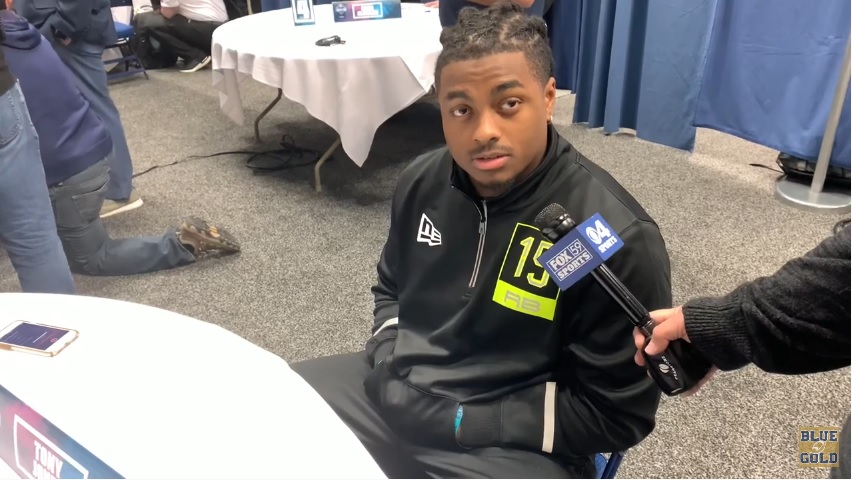 -Vision leaves much to be desired at times
-Limited explosiveness in short area to win
-Consistency was a major problem; looks unstoppable one week, disappears the next
-Stop-start takes longer than normal for a back his size
-Struggled with conditioning early in ND career
-Needs a runway to get moving laterally

-Played in 38 career games at Notre Dame in three seasons, starting 15 of them
-Redshirted his freshman season
-Started all 12 games in 2019, rushing for 878 yards and six touchdowns on 144 carries. Added 15 receptions for 104 yards and a score during redshirt-junior year
-Finished three-year career with 1,524 rushing yards and 12 touchdowns on 271 carries. Added 27 catches for 273 yards and two scores through the air
-Rumbled for an 84-yard TD in the Camping World Bowl victory over Iowa State, the longest rush in Notre Dame’s bowl history and Camping World Bowl history
-Invited to the 2020 NFL Scouting Combine. Clocked a 4.68 40-yard dash; recorded 13 reps on the bench; recorded a 32.5-inch vertical jump and a 119-inch broad jump; clocked a 7.18 3-cone

Steelers’ fans should be familiar with a big, powerful back from Notre Dame that wears No. 6. Jerome Bettis was quite the back at Notre Dame in the late 1980s and early 1990s. Tony Jones Jr. is nowhere close to Bettis’s stature in South Bend, but he could be a back that catches the eyes of the Steelers late in the 2020 draft with his size, hands, and pass protection abilities.

While his 2020 Scouting Combine wasn’t great, at least in terms of his 40-yard dash time of 4.68, Jones Jr.’s tape is pretty solid and shows some home run ability well north of 200 pounds.

Against Iowa State in Notre Dame’s 2019 bowl win, Jones Jr. ripped off an 84-yard touchdown romp off the left side of the Fighting Irish’s line, showing some great straight-line speed to run away from defenders in space.

When a big back gets to lumbering like this in the open field, it’s so fun to watch.

While he is a big back and doesn’t look like he’d be a real pass-catching threat, Jones Jr. moves quite well in space as a route runner and flashes some soft hands. This is a great rep against Vanderbilt in 2018, plucking the ball out of the air over his inside shoulder on the wheel route.

It’s great to see a back track the football like this down the field.

He’s not the fasted or most explosive back out there, but he flashes some good lateral agility and gets up the field in a hurry once he plants his foot in the ground and turns north.

He has some wiggle too, as well as good contact balance to make a man miss in space and pick up additional yards.

The thing I love about Jones Jr. the most, and the reason I believe he will not only make a roster, but also contribute quickly, is his abilities as a pass protector.

He stays square to defenders, throws his hands cleaning into the strike zone, and latches on to mirror pass rushers.

In both of the clips above, you see Jones Jr. strike, latch, and ride the defender in pass protection to give his quarterback time in the pocket. In the second clip in the bowl came Ian Book does him no favors, rushing out of a clean pocket to try and extend the play.

Final thoughts on Jones Jr. – he’s a big back with limited wear and tear, flashes good power downhill in short-yardage situations, and good hands out of the backfield. He’s a strong pass protector and can quickly make an impact on a roster that utilizes the running back by committee approach.