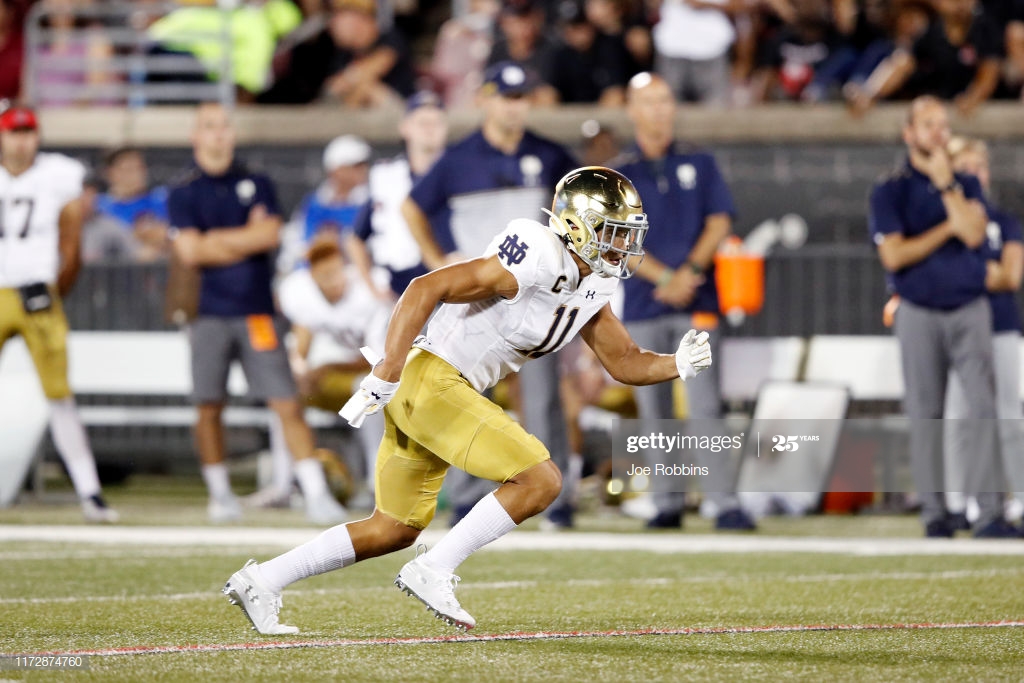 Notre Dame safety Alohi Gilman has had quite the backstory. A three sport athlete in high school, he originally started at Navy before transferring to Notre Dame after the 2016 season. From there he went on to start the final 26 games of his collegiate career while also being named team captain in 2019. He played both as the last line of defense and in the box and showed that he had a knack for the football with his three interceptions and five forced fumbles.

Great players are always aware of their surroundings and they are always ready to capitalize when it matters most. While Gilman may not be a natural ballhawk, as he has just three interceptions, he has been great at taking away the football by other measures. That usually includes him stripping the football. The best safeties have to be able to produce turnovers and Gilman has been highly effective in that regard. Watch as he strips the football from this Vanderbilt receiver at the goal line. That play alone saved his team seven points and surely earned Gilman a ton of praise.

Gilman is blessed with some incredible short area quickness as he comes downhill very fast and aggressively. While sometimes his aggressive playstyle gets the better of him (more on that later), it could be a thing of beauty when it all lines up. It lines up perfectly on the play above as Gillman is able to dash right by Georgia’s lead blocker and lights up the ball carrier for a marginal gain.

The Notre Dame safety brings the same intensity one very play. He is always playing 100 miles per hour, especially near the line of scrimmage. He is a fearless player that is not afraid to be physical in the trenches or take on blocks. Watch as Gilman once again comes crashing downhill, takes on a Louisville blocker and then makes the tackle. Once again, when he puts it all together and attacks under control, Gilman can be a valuable asset in run defense.

While Gilman has done a pretty fine job in the box or coming downhill to help against the run, his aggressive playstyle can sometimes get him in trouble.

Gilman is sometimes susceptible to over pursuing and taking bad angles when crashing downhill. It is here that his speed can get the better of him. Watch as he crashes downhill on the play above but over pursues, leaving an easy cutback opportunity for the running back who is off to the races.

Another example here as Gilman comes downhill and is caught out of position, leading to a significant gain. While Gilman’s playstyle can lead to some big hits and stout run defense, teams will likely be looking for more consistency in this area. The Notre Dame safety is very hit or miss and that may be too high of risk if he wants to be a contributor at the next level.

If you are looking to see Gilman in coverage, his tape against Vanderbilt from the 2018 season is a great start. He spends some time in the slot during this game, covering 2020 draft prospect Jared Pinkney. He also has experience playing in deep coverage though there seems to be room for him to grow as an in the box safety if he can show more consistency coming downhill.

One of the main issues for Gilman in coverage is that he is sometimes just a half second too late to pick up on what is transpiring around him. Watch on the play above as he lets the crosser get across his face and is late to pick him up. To be fair to Gilman, it is hard to judge exactly what his responsibility is on the play above as there seems to be a miscommunication with the other two defensive backs behind him as well. Still he commits to the crossing route but is late to close down on it.

Overall, Gilman is going to be a player that gives it his all on every play. His playstyle is going to earn him a special teams’ role at a minimum as he shows a high motor consistently. Perhaps with some more seasoning he could one day be a valuable depth piece for a team at the next level.

Games Watched: vs Georgia, vs Louisville, vs Vanderbilt (2018)