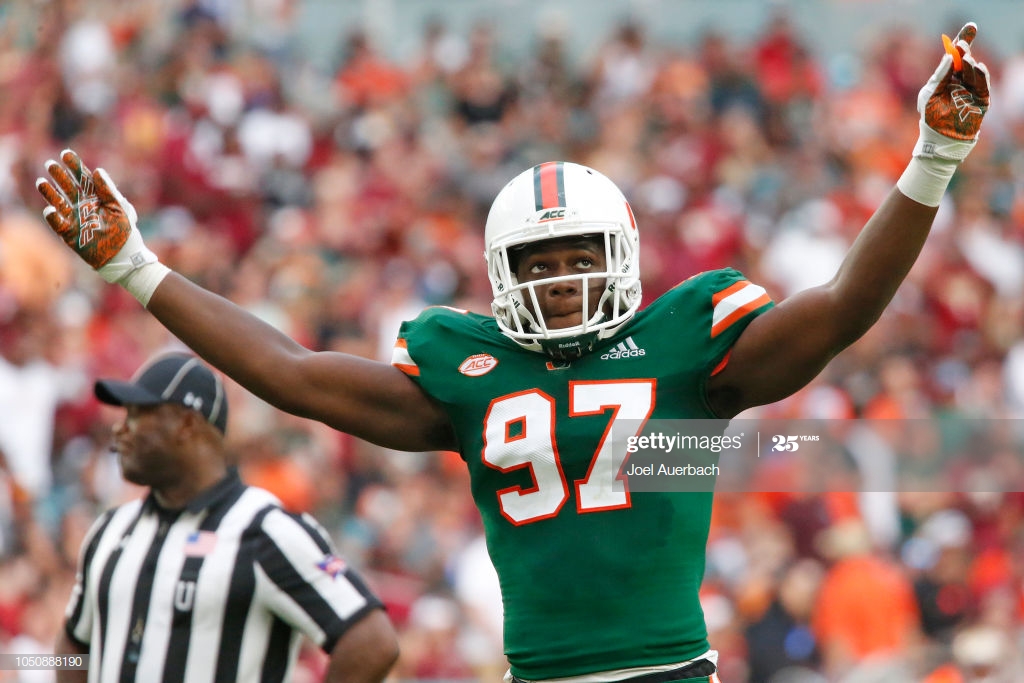 A long and lean edge player who played on both sides of the defense in Miami’s four man front. He had solid production in his final season but it wasn’t quite as good as the previous year. He has good arm length at 34 inches and performed pretty well at the combine with a 36 inch vertical and a 1.67 10 yard split.

Against the pass, from a 2 point stance he showed the ability to get off the line quickly at the snap and get his hands on the blocker and use his length. He showed good use of hands with slaps and chops and uses long strides to get on the hip of the tackle. He had some success pairing his hands with rips to defeat blocks and get pressure. When he gets a lane to the QB he can close quickly. In coverage, he was asked to spot drop in the flat on occasion and used as a spy in the middle of the field.

Vs Florida he’s in a two point stance on the right and will drop to spy on the QB and chase him down to make the tackle.

Vs Florida he’s on the right in a two point stance and show a chop and how quickly he can get up field on this quick pass.

Vs Duke he is on the right edge and this was easily the best pass rush I saw. He uses a double chop to knock down the hands and good rip to get around the tackle and get a sack fumble.

Against the run, he has solid hand placement to the blocker on runs his way while good aggressiveness to attack lead blockers and shows solid quickness chasing balls away from him. He shows good chase across and down field and is a good tackler.

At Virginia Tech, his timing is okay at the snap and he’ll scrape down the line pretty much untouched to make the tackle

Vs Duke, on the right edge he’ll attack the pulling OL in the backfield and works off to get in on the tackle.

The first four games I watched I held out hope it would get better but overall it was uninspiring. He doesn’t have the technique or strength to play two gap or the quickness at the snap to play one gap. He has marginal mental processing when identifying run vs pass often chasing the fake or losing track of the ball. His quickness at the snap especially from the 3 point stance was generally average with rare good bursts and didn’t provide a lot of punch with his hands. His pass rush plan was very vanilla not making consistent effort or able to mix in many moves. He didn’t show the ability to rush with power or show a lot of bend around the corner. He didn’t show aggressiveness on twist and stunts. He lacks the strength to set the edge or hold his ground against double team blocks and was often handled one on one by tight ends.

Vs Wisconsin he’s on the left end and will follow the RB and the pullers to the right while the QB runs behind him.

Garvin’s tape was honestly disappointing until the last game I watched.  He was low on mental processing, quickness at the snap, pass rush moves and block destruction. The final game against Duke, his final game, he looked like a different player. He was quicker at the snap and tallied about 5 tackles and a sack in the first quarter that had me asking “where was this”?

The processing was an issue for me and what type of defense does he fit in? He’s going to need time to see if he can develop the ability to diagnose and add strength. He is not someone I would target but I would use him in situations where he doesn’t have to think too much. Use him pass rusher in a 2 point stance to just pin his ears back and get after the QB or be used as a spy in the middle of the field to use his length to disrupt passing lanes in dime coverages.