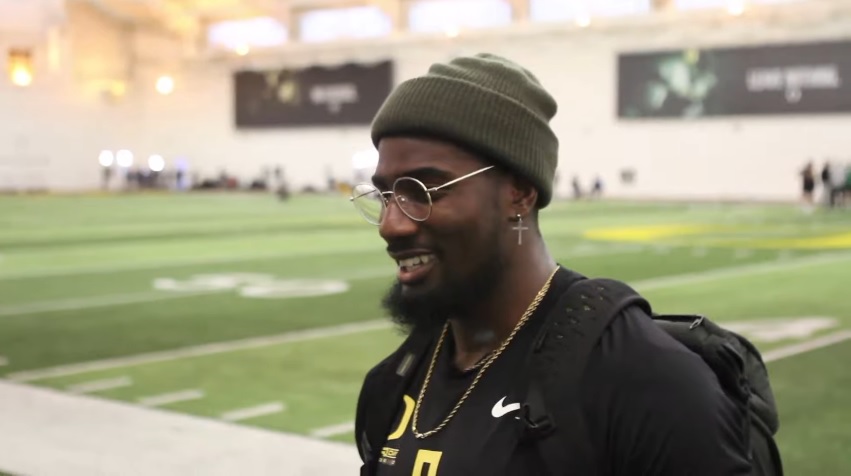 Juwan Johnson should be a familiar name for those in Pittsburgh and in the state of Pennsylvania. The class of 2020 receiver played a few years at Penn State before transferring to Oregon for his senior year. Johnson would spend his final season paired up with top quarterback prospect Justin Herbert. Unfortunately, the receiver was not able to fully capitalize as he missed four games due a calf injury was held to just 467 receiving yards. While he did shine at times, he also had an equivalent number of inconsistent showings, mostly due to his frequent drop problem.

For every high, there is a low. That seems to be the general theme with Johnson’s tape so let us begin with his peak. A magnificent one-handed catch down the sideline against Ohio State, this was not only the highlight of Johnson’s tape but also one of the top catches in the NCAA at the time. The former Penn State receiver is capable of making extraordinary catches due to his size, arm length and hand size giving him a large catch radius.

Johnson’s physical toolset is his greatest asset. When he is in rhythm, he can simply out muscle and out jump opposing cornerbacks for the football. There could be room for him to grow as a red zone target if he can improve his hands as his size and frame make him an excellent jump ball receiver. Watch above as Johnson tracks the football and high points the football. With his 6’4 frame and 34’ arms, this is an obvious mismatch that leans in the Oregon receiver’s favor.

The Oregon receiver ran his fair share of inside breaking routes and while he is nowhere near being a crafty route runner, he was able to take advantage of the lax coverage that many college defenses provided him. With room to operate, Johnson was a nightmare to tackle with the football in his hand. Watch as he takes the Colorado defensive back for a ride on the play above. While he may not get the benefit of lax coverage in the NFL, look out for Johnson in the open field as his size makes him one tough man to tackle.

Another area where Johnson’s size will work to his benefit is in the blocking department. Besides being a willing downfield blocker, Oregon also used him in a few interesting ways. On more than one instance, Johnson was tasked with motioning towards the formation and laying a block to pave the way for his running back. Due to his large frame, this actually worked successfully more often than not.

Circling back to the top when I mentioned that for every high there was an equivalent low. For every seemingly impressive catch that Johnson made, there are at least one to two drops that will plague his performance. For a receiver with such massive hands, it is disappointing the rate in which he drops footballs heading his way. There are a lot of flat out drops sprinkled throughout his tape, both at Penn State and Oregon.

There are also a few occasions on which Johnson double clutches or tries to body catch the football and these also result in quite a few drops. If the Oregon receiver wants to survive on an NFL roster, his hands are going to have to improve immensely. For a target that brings excellent height and a large catch radius, it is maddening to see the issues he has with holding onto the football.

Other areas of concern are his overall lack of athleticism. He is not going to burn you downfield and he is not generally quick either, leaving little room of separation in his route running. His bread and butter are going to be his physicality and winning contested throws. The only issue is that his ability to make these plays often comes down to a coinflip due to his poor hands. If Johnson wants to see any longevity at the next level, his consistency when it comes to catching the football is going to need to improve by a tenfold.