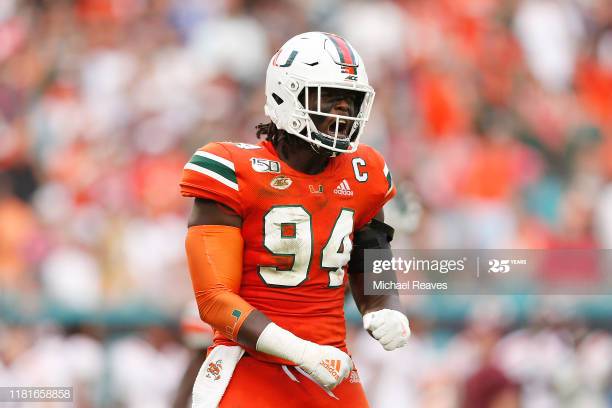 Miami EDGE Trevon Hill is not going to be the first name that analysts fire off when mentioning this year’s pass rushing class but Hill is a compelling player for many reasons. While his backstory or numbers will not amaze anyone as Hill was dismissed from Virginia Tech in 2018 and put up just 4.5 sacks during his senior year, his film is loaded up with a ton of promise. The Miami pass rusher shows off many pass rushing tools and assets that could make him a very promising edge rusher for teams to develop.

It really felt like Hill was coming into his own at Virginia Tech before his dismissal as he flashed a variety of different moves and techniques to rush the passer. Above is one of my favorite reps of his and shows some of the untapped potential that he offers. Advanced hand placement is displayed as Hill shows he understands how to use his arms to generate leverage to win. Once that leverage is established, the former Virginia Tech edge rusher dips under the outside shoulder of the Clemson left tackle and records a sack. Just a great rep and one that should leave a lot of NFL scouts impressed.

Hill generally does a good job getting under the outside shoulder of the opposing left tackle in order to create pressure. He does this with a good get off the line of scrimmage and with some adequate bend. Here is he is once again, working under the shoulder of the left tackle. Hill bursts off the line and then is able to position his body to slip around the bend for a sack.

At 248 lbs, Hill is lighter than most traditional full-time edge rushers but he shows some capability of a bull rush. He is lined up as the LOLB above, which is different than the first two plays but Hill is able to bully the Florida State offensive lineman backwards into the pocket. While he may not be the strongest edge rusher, Hill does a nice job converting his build up speed into power on the play above.

Alright so Hill has shown some dip, some bend and some bull rush. If you thought that was all he was packing, then you unfortunately thought wrong. There is also a rip move in his arsenal, one that showed during his lone year as a Miami Hurricane. Lined up as the ROLB above, Hill works the edge before ripping through the UNC right tackle. A really advanced move here, Hill is able win his way around the edge and force a fumble as well. It is almost criminal that the Miami pass rusher is not attracting more attention as his tape highlights some highly advanced pass rush potential.

Fear not though, as there is still a bit more to come. Moving onto Hill’s speed now which is another area where promise and potential lies. The Miami edge rusher is very explosive off the line of scrimmage and is just too fast for more slow-footed tackles to handle. When he is not beating you with any of the other pass rush moves listed above, Hill can simply just beat you off the ball. He does in to generate a quarterback hit above but he can also do it in run defense, which is displayed below.

Hill can also beat opposing linemen across the line of scrimmage which he does above. He explodes into the backfield and blows up this play before it even has a chance to begin. While he has a great portfolio of tools, Hill’s explosiveness is definitely one of his top-rated assets.

When it comes to areas of concerns with Hill, let’s start on the field first. He lacks strength which can be a major problem with run defense and holding his own on the edge. He may have to bulk up if he is drafted to be a stand-up outside linebacker in a 3-4. He also sometimes runs himself too vertically up field, taking himself out of the run defense completely and leaving his defense vulnerable. Because of this, Hill is going to be a guy who needs some polish but with those pass rush tools, he should be a guy who teams try to develop intensively. Other off field concerns obviously include his dismissal from Virginia Tech due to an argument with a coach.

Hill is not generating a ton of buzz at the moment but like the stock markets, this presents teams with a better opportunity to buy low. His dismissal from Virginia Tech and lone season at Miami may cause him to be overlooked but there are more than enough reasons to buy into Hill’s stock. He’s quick off the line and has a variety of pass rush potential, even showing some advanced moves for his level. He is also very versatile, having played both on the left and right side of the defense.

Games Watched: vs Florida, vs Florida State, vs Virginia Tech