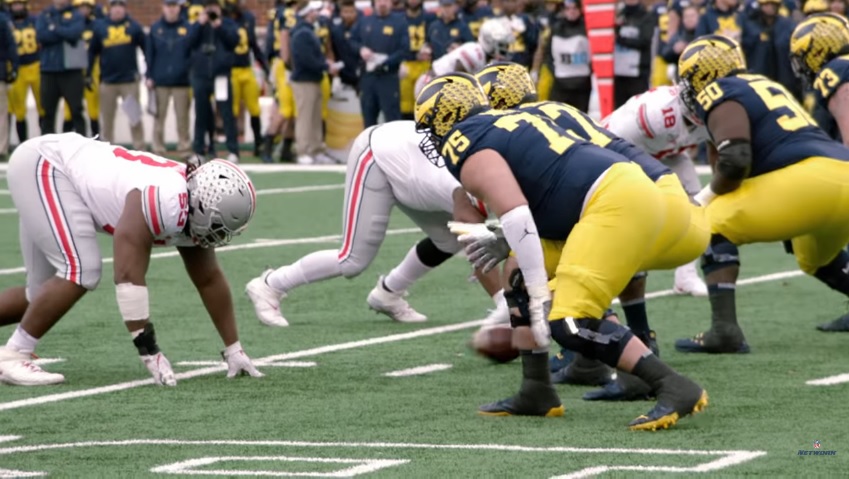 – Thickly built frame with decent length and looks the part of an NFL guard
– Excellent functional strength and impactful run blocker, generates a ton of movement on his first level/down blocks
– Does well to climb and stick to the second level in the run game, fits up on linebackers well, stays square and under control
– Has a nasty to his game, runs his feet to the whistle
– Shows power and ability to overwhelm/overpower linebackers/defensive backs
– Works to keep a sound base in pass protection, shows need bend and an IQ, able to vary up his sets and rushes, will flash a fake punch to keep pass rushers off base
– Has enough length and strength to ride pass rushers upfield
– Some versatility and flashed ability to play inside
– Good starting experience and excellent NFL bloodlines

– Bit of a sloppy body and profiles more like a guard than a tackle
– Average athlete who struggles to change directions laterally, has trouble with inside counters when pass rushers threaten wide initially
– Gets outleveraged in pass protection too often, uprighted and exposes his chest, causing him to get run into the pocket by power rushers/bull rushes
– Will be late to recognize stunts and isn’t a strong enough athlete to react when he is
– Not a ton of experience playing spots other than left tackle

Runyan is a name that will sound familiar to most football fans. His dad was a titan along the offensive line and Runyan Jr. followed in his footsteps in choosing Michigan.

Unlike his dad though, who was a tackle, Runyan Jr’s home in the NFL is probably best suited at guard. But let’s get into his tape first.

The best thing about him is run blocking. He’s country strong who generates plenty of movement in the run game, like on these down blocks. He’s the left tackle in all the following clips.

And you see his raw power here pulling around on this run to the left,

In pass pro, he works hard to build his house and shows good knee bend and overall base who despite athletic limitations, can seal edge rushers upfield.

But he has two big issues in pass pro. One, and this was surprising, he can get uprighted in pass protection, causing him to lose power and get walked back. He shows enough strength to anchor and stall it out but it’s going to be an issue in the NFL, where everyone is bigger and stronger.

And he’s just not a great athlete who will struggle against quick pass rushers who can vary their approach and attack. Gets beat badly on this spin move to the inside off the initial outside rush.

He never made an official start at guard but filled in there against Purdue in 2017 for 27 snaps. And that’s where he looked the best. Lack of athleticism will be masked and his strength and size – good for a guard – will be maximized. He can maul in a power/gap run scheme and honestly, he can even function in zone because of the movement he creates. Going to open some big gaps when OCs call inside zone. That versatility though, able to play tackle in a pinch, will certainly help and boost his value.

At his ceiling, I see a Rob Sims comparison, who was an Ironman for the Lions for most of his career, once making 80 straight starts, whose father also played in the NFL. On the lower end, and a little more recent, Joe Dahl.